In a recent demo of the game shown at a preview event in San Francisco, Guay and members of the Watch Dogs development team highlighted three areas that they believe players will find engaging. The first is voyeurism, which features heavily in the game. According to Guay, the theme of surveillance is particularly interesting to explore, especially when we consider the increasing number of security cameras that are being installed in cities and how everything — from traffic lights to power networks — is now connected and managed by computers.

"The question we asked ourselves was, 'What if we had control over all these things? What could we do with it? What are the flaws of having such a connected system? How could it be used?'" Guay said. "We're giving that control to the player and we're letting them answer it for themselves."

The game, which is scheduled to launch in North America on Windows PC, PlayStation 3, Wii U and Xbox 360 on Nov. 19 and is due to launch on the PlayStation 4 in Q4, takes place in the "present day." But it's a present day that is a bit more futuristic, a bit more connected than today's reality.

In the Chicago of Watch Dogs, a central operating system manages the entire city.

"A computer controls a major city, but who controls the computers?" Guay asked.

The answer is private companies. And personal data collection is the key commodity. Everyone in Watch Dogs casts a digital shadow, a collection of personal information that includes purchases, medical records, reading habits.

The game's protagonist can hack smartphones, laptops and the computers that run the city, allowing players to invade any character's privacy at will.

Guay said there's a voyeuristic tendency in all of us, and Watch Dogs plays on that desire to snoop into people's private lives. In the demo shown to Polygon, the player could hack a security camera, which allowed them to see from the camera's point of view. From this viewpoint, the player could see into a person's apartment, identify a laptop sitting on the person's desk, hack into the laptop's camera and subsequently "enter" the person's house to eavesdrop on their conversation.

While walking down a street, the player can scan the data of every person they encounter. There is an overwhelming amount of information on every character — not all of it will be immediately useful, but Guay said it can help the player make certain decisions.

In an example shown in the demo, the main character, Aiden Pearce, hacks a phone to reveal a text message conversation about a man plotting to murder a drug dealer who allegedly raped his wife. Using this information, Pearce tracks down the rapist, hacks his data and learns that he has a criminal record for sexual assault. From here, players can decide whether they want to intervene by killing the man who wants to kill the dealer, knocking the man out and calling the police or doing nothing and allowing the murder to take place.

"You're going to have the tools to act in nuanced ways," Guay said. "So for example, you don't only have to kill people. You can knock them out and let the cops deal with them.

"A lot of games give us extreme answers to very nuanced questions, and that's easy to do, but we're trying to give more balanced answers to those situations, which, I think, is closer to what people actually think. I think we can relate to a character that is flawed a lot better than we can relate to someone who is either ultimately evil or absolutely good."

The third main feature of the game shown during the demo was the systemic AI that, according to Guay, will allow players to be the authors of the "best moments" in the game. Guay said that in most games, there's a balance between a scripted AI and one that has its own brain that can make its own decisions. In Watch Dogs, the AI leans heavily toward the latter.

"For example, imagine a car chase," Guay said. "For a lot of games, car chases are fully scripted — some games even script the traffic along the way, so it's always going to be the same. But if we do that in our game, it doesn't work. What if the player hacks a traffic light and causes an accident? Then the whole thing would break down. So we need all those cars to have the smarts to try to steer away, and the guy we're trying to chase has to have a new plan of action and change his course." 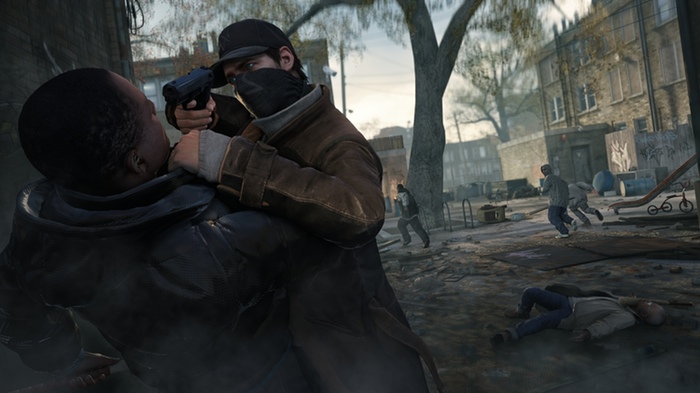 The worst crime in the Chicago of Watch Dogs happens in its wards.

In the unscripted demo, Aiden Pearce tried to take down a "rat" who was getting away in a car. According to Guay, who had seen the demo many times, that particular car chase has never played out the same way twice. During one playthrough, Pearce was able to ram his car into the rat's vehicle while on a bridge to knock it over. In another playthrough, Pearce hacked traffic lights and caused an accident, which stopped the car before the rat could get away. In the playthrough we saw, the car avoided being knocked over, drove right through the hacked traffic lights and was only stopped when Pearce got out of his car and shot at the rat's tires.

"One of our hopes is that the best moments players will have in the game won't be scripted events. My hope is the thing they talk about at the office or with their friends is the thing they created themselves," Guay said. "It's the scenario where they had a plan and they tried to pull it off, and something wrong happened and they have to improvise. And they know — gamers know when that happens; it's their moment. They made it happen.

"So that's what I'm hoping — that the best memorable moments in Watch Dogs are unique to the player."

Guay called these unscripted, memorable moments one of the key tenets of the game: dynamism. That ability to impact a living world is tied to the game's other key component: connectivity.

While the team declined to discuss the multiplayer in detail, they explained that it will seamlessly merge with the single-player experience.

This multiplayer experience will be augmented by a companion app that will deliver "Chicago in the palm of your hand," he said.

"The goal is to connect not only through single- and multiplayer, but also when a player moves [out] of their living room," he said. "This will allow you to literally control the city in the palm of your hand."

"A lot of games give us extreme answers to very nuanced questions..."

The 45-minute demo wasn't just full of action sequences; it also offered tantalizing glimpses into a game packed with opportunities.

The in-game smartphone, for instance, can be loaded up with apps that expand the gaming experience. We saw one app that could be used to listen to and recognize music playing in stores or on radios in the game. Once recognized, those real songs could be purchased for in-game money and added to the phone's playlist. At one point Pearce hacked an outside speaker that was playing dull Muzak and replaced the music with the song from his phone.

At another point in the demo, Pearce pulled up his phone and started playing an augmented-reality shooter. Once the smartphone game started, the world around Pearce started to populate with neon-colored aliens. A gun formed in Pearce's hand and he ran around shooting the animations.

Guay said that to the rest of the world it would look like Pearce was running around acting a little crazy shooting at things with his hand that no one could see. He pointed out several non-player characters in the game who seemed to be playing their own version of the ARG, staring off into space and running around.

"You can acquire many apps," he said. "Some are illegal, some are legal."

Kevin Shortt, the game's lead story designer and writer, later told us that the game was inspired by a mix of fiction and non-fiction, but that ultimately it's meant to be a game about the world we live in.

"For us it's really, it's kind of about the world we live in," he said. "We all have our cell phones. We're all connected. That was a big reason, a big impetus for this game. Where are we going? What are the repercussions?"

Brian Crecente contributed to this report.