Third time's the charm: Hands-on with The Bureau: XCOM Declassified

Share All sharing options for: Third time's the charm: Hands-on with The Bureau: XCOM Declassified

XCOM, finally freed of its predecessors' successes and the heavy weight of aging gamers' expectations, finds a new form and attempts to refine an intriguing genre in The Bureau: XCOM Declassified.

Part third-person shooter, part time-dilating strategy game, The Bureau manages to offer up a new take on a franchise so recently reinvigorated with a faithful modern adaptation.

The upcoming game tells the story of the transformation of a secret government agency from one designed to watch out for communist threats to one fighting to save the world not just from aliens, but even knowledge of that looming superior threat.

The game plays from a third-person perspective, with players controlling their own character, William Carter, and issuing commands to two nearby agents. It feels a bit like a slicker version of 2004's Full Spectrum Warrior. When a player wishes to issue a command they drop into battle focus mode, which slows time to a crawl, giving them a bit more time to issue commands using a circular hub broken into three sections, one each for your character and the two agents.

While time is slowed, it's certainly not stopped; pausing to reflect too long can result in downed agents or missed strategic opportunities. Tapping on the D-pad can order agents to a position quickly or call them back to your side.

There are four classes of agents a player can choose from to accompany them: recon, support, commander and engineer. Each class brings with it special abilities. The engineer, for instance, has the ability to toss a mine on the battlefield, while the commando can use a pulse wave that knocks all of the enemies back and to the ground.

Each of these four classes can also be specialized with one of six backgrounds, which tweak their buffs and special abilities. Four of those backgrounds are the same for all of the classes: technical, which lets you use your ability more often; combat, which lets you deal more damage; endurance, which lets you survive longer after you're downed; and adrenaline conditioning, which allows you to recover faster.

The two other backgrounds are specific to the classes and offer up special extras. For instance, a support with a pre-med background can tend their own wounds, while a support with an officer background gets an increase in their marksmanship. Other class-specific backgrounds include CIA, FBI, gunsmith, grease monkey, Korean War Vet and Deniable Ops.

Characters also get perks, essentially very powerful, slow-to-recharge special abilities. You character, for instance, can over time earn the ability to deploy their own silacoid, a classic alien terror unit from the original game. Other unlockable abilities I spotted included the ability to call in a drone, control the mind of an alien or do a mind merge. Character classes max out at level ten.

This addition of complex support characters that can be commanded to attack, move, taunt and use abilities goes a long way in shifting The Bureau away from feeling like an XCOM-skinned third-person shooter and toward a new take on a classic franchise.

In my playthroughs of the demo, I found myself quickly adapting to the game's battle focus, using it to quickly plot out a strategy for an attack. I found myself using cover much more than I typically would in a third-person shooter, and relying on the tactics of flanking and distraction to take out more heavily armed creatures and superior forces. 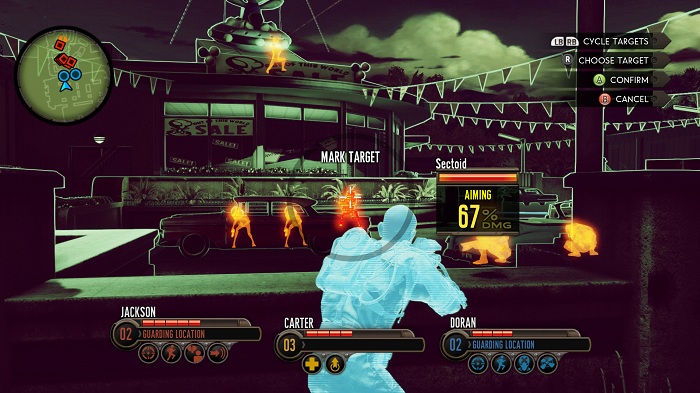 As with the classic XCOM games, players have the ability to revive downed agents or be revived themselves. If you fail to do so, you lose the agent for good. The game's three difficulty levels impact how the game treats these revives as well. Play on easy or normal, and the character can return directly to battle. Play on hard, and an agent can only be stabilized — saved from death — but can't fight until you can access the base again.

The difficulty setting also impacts how often you can recruit or reequip your team. On the hardest setting, you can only recruit at the base. On the easiest you can also recruit replacements mid mission and at supply stations found between missions.

The game's settings seem very similar to the second time the game was shown off (this is the third), back at 2011's E3. The characters look plucked from Mad Men and the settings are firmly locked in the early '60s. The juxtaposition of those early '60s sensibilities, small towns and characters with the modern science-fiction design of the enemies you face and their technology goes a long way to make this game feel not just like an XCOM title, but a refreshing take on a tactical shooter.

The game's plot, which pushes you through the birth of XCOM and its struggle to identify and defeat classic XCOM aliens, only adds to the mix.

My brief time with the game finally dismissed the concerns I've had with this reimagining of the XCOM franchise since first seeing it in 2010. From what I played, the game no longer feels like a third-person shooter dressed up to look like XCOM; it feels like an XCOM game designed for a new generation.

The only question is: Does anyone want to play a third-person XCOM tactical shooter? I mean, besides me.