Share All sharing options for: Discussing where games are and where they're going at the Twofivesix conference

Recent years have seen an explosion in popularity for games among a much wider audience than ever before, and tied to that is their growing cultural relevance. As an interdisciplinary medium, games sit at the intersection of a wide variety of fields and have countless applications in all walks of life, argued the speakers at Saturday's Twofivesix conference.

The day-long event, put on by Kill Screen at the Invisible Dog Art Center in Brooklyn, featured individuals from within the game industry and outside of it, but with games as a common ground. In talks moderated by Kill Screen founder and former Wall Street Journal reporter Jamin Warren, the panelists discussed the current state and future potential of the medium, as well as the ways in which their own work coincides with or involves games.

Far Cry 3 lead writer Jeffrey Yohalem and Electric Literature co-founder Andy Hunter kicked off the sessions with a discussion of interactive storytelling. Yohalem, who advocated for Method acting in video games during a talk at the 2013 Game Developers Conference, said he intended Far Cry 3's story to subtly subvert the typical setup of most shooters. But he previously expressed his disappointment that players seemed to miss the story's undertones, and pointed to the nature of big-budget shooters — the gunfights and associated spectacle — as a potential obstacle to the engagement of players with stories within those kinds of games.

Yohalem explained that he drew on Disneyland for inspiration in putting together Far Cry 3, since the theme park presents a variety of attractions that are all part of a single narrative. "Games are probably more like curated galleries, in a way," he said.

gamification is "hijacking our neurochemistry"

Hunter, whose company uses new media and technology to adapt publishing to the modern digital landscape, said that although he doesn't think that rewarding players is "inherently bad," he believes gamification is "hijacking our neurochemistry" in negative ways. Yohalem continued along that line, wondering aloud if the fun elements of games are "inherently destroying the ability to talk about other issues." He attempted to imbue Far Cry 3 with subtext beneath the explosions and shooting, but it was a message that players largely missed, so his future storytelling ventures will be "more out there," he said.

Robin Hunicke, a co-founder of indie studio Funomena and formerly the executive producer on Journey, echoed Yohalem's point about game design as curation. She characterized it as a "process of selection," of "removing unnecessary things and creating a shape from those choices." Paola Antonelli, senior curator at the Museum of Modern Art's Department of Architecture and Design, said she believes game design is significant because it is an interdisciplinary field — "it demands the best of all designers."

Antonelli explained that the MoMA exhibit of 14 video games that she helped put together, Applied Design, seeks to highlight games that are examples of outstanding "interaction design." But some games have systems that make them tough for the museum to build showcases that will let visitors experience that design. For special cases like Eve Online, an MMO, MoMA worked with developer CCP Games and the Eve Online community, which put together a video that showed off "a day in the life of Eve." 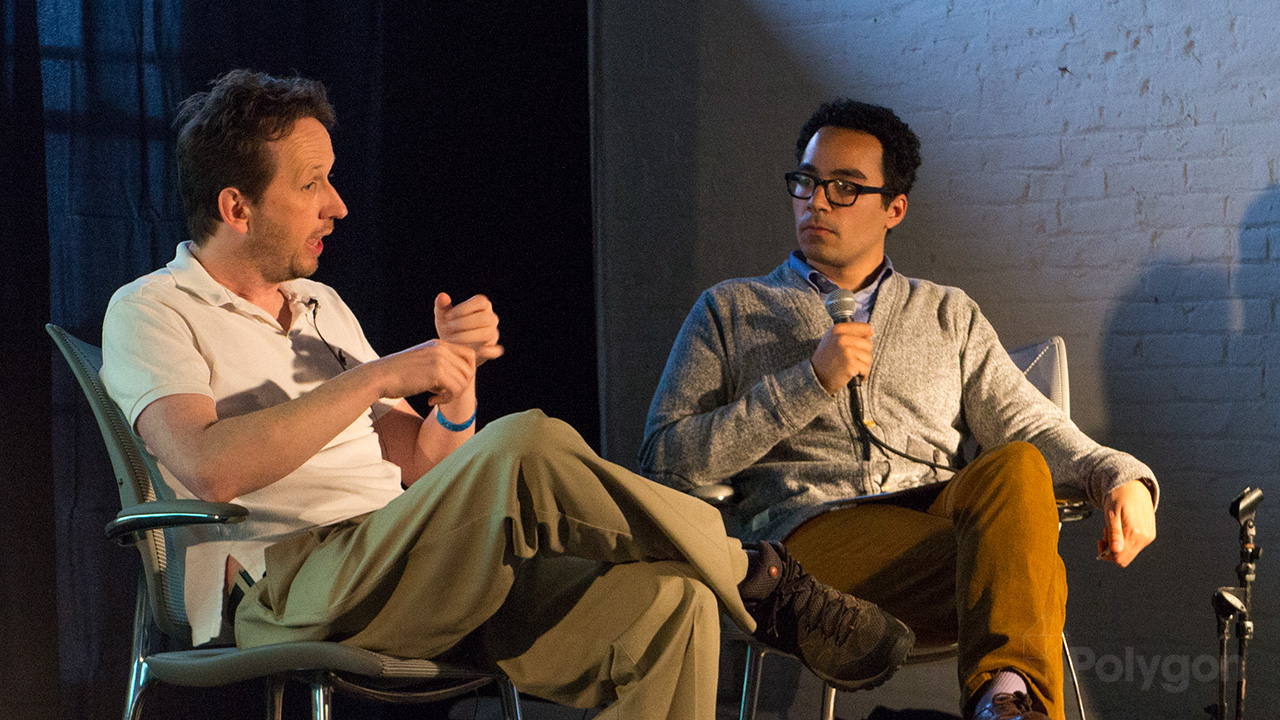 In a midday talk, game designer Rod Humble spoke of the power that games have in engaging their players. Humble worked on the original EverQuest before joining Electronic Arts, where he ran the company's Sims label, and became the CEO of Second Life developer Linden Lab in 2010. He recounted an instance in which the EverQuest team nerfed bards, a change for which he received three death threats in a day.

"That was a wake-up in terms of the engagement level," said Humble. "There's an investment there, and I think that's a clue to where we can take [games]."

Humble added that he joined Linden Lab because Second Life, as a virtual world that gives players the power to make their own experiences. "The longer you're involved in a form, you begin to see the tools — the fundamental building blocks — are where the action's at," he explained.

A post-lunch session offered one way in which to increase that engagement level: the use of data. Bill Squadron is the president of Bloomberg Sports, a company that provides data analytics services for organizations such as Major League Baseball and the National Football League. He previously co-founded Sportvision, the company credited with innovations such as the yellow first-down line in televised football games.

Squadron explained that data-driven visualization is key in improving a viewer's understanding of a sport (and thus, their engagement with it). Major League Gaming president and co-founder Michael Sepso agreed, pointing out his company's work with Call of Duty: Black Ops 2 developer Treyarch. MLG worked with the studio to integrate a detailed statistical display into the game to improve the experience for viewers of Black Ops 2 livestreams. Along with video of a match, the MLG interface provides an in-game map as well as information on the players — who's alive, who's dead, who's respawning.

game design "demands the best of all designers"

A few of the talks focused on physical games. Zach Klein is the CEO of DIY, a community focused on encouraging kids to be creative and make things. Play, said Klein, is "a more realistic way for people to collaborate to learn" than traditional education in school. As humans, he explained, "we're naturally drawn to play," and when we're playing, "learning becomes indistinguishable from fun." He argued that play is the best way to teach children how to collaborate effectively, a vital skill in today's ever-changing career landscape.

The final session before the closing keynote featured executives from two major tech startups, Foursquare founder Dennis Crowley and Kickstarter co-founder Yancey Strickler. They both touched on the psychology of gamification as a way to encourage people to try new things.

Crowley said he started Foursquare as an app that would help users explore New York City, while reproducing the "magical experiences" you find in games. The company initially found that its badges — although they were essentially meaningless digital markers — were a powerful motivator, with users going to places they wouldn't normally visit just to earn badges.

Strickler said that Kickstarter officials have been hesitant to integrate gamification into the service, since it should be all about the projects and their creators. But the company added a pie chart to users' profile pages to show them the categories of the projects they've backed — as well as the categories in which they haven't backed anything. It's a way of encouraging exploration of the variety of projects on the service, of "getting people outside of their comfort zones," said Strickler.

Double Fine Productions founder Tim Schafer closed the conference with a discussion of his studio's history and identity. He said he started the company with two main goals: to create and control its own intellectual property, and to not hire jerks. It was a major shift from his time at LucasArts, a studio he described as having a "history of secrets." That's why Double Fine decided to partner with 2 Player Productions for a behind-the-scenes documentary for Broken Age, the adventure game that the studio Kickstarted last year for $3.3 million.

"We let people in," said Schafer, and "people don't react badly to that stuff. They get more invested in your company."

Schafer also touched on Double Fine's shift after Psychonauts and Brutal Legend to a studio that would make smaller games with smaller teams led by various individuals at the company. That initiative led to titles like Costume Quest and Stacking.

"You make your bets on people, not ideas, for the most part," said Schafer, explaining his process of deciding which games to put into production. "Creating an environment where people can try out their own things and share them is really an integral part of what our company's all about."