We live in a hyperconnected, technologically turbo-charged world of mass surveillance and "digital shadows" that is so subtly controlling, that it makes the notion of Big Brother seem quaint.

In George Orwell's Nineteen Eighty-Four, the only person watching you was the government. In today's society, the millions of digital eyes found in laptops, video game consoles, tablets and smartphones and a person's growing trail of data and information left online, are the realization of a more insidious invasion of privacy, a willful Little Brother.

Where the overt surveillance of Big Brother was examined in a 1940s book, today's troubling Little Brother is scrutinized in an upcoming game from developer Ubisoft Montreal.

Watch Dogs plays with the notion of information warfare and civil liberties by dropping a gamer into the shoes of a modern-day hacker vigilante. The game takes place in a re-imagining of a real Chicago already replete with surveillance cameras. The game's Windy City has been turned into a place where computers track a web of surveillance cameras, use of free WiFi hotspots, traffic patterns and conversations to improve policing, public safety and life through technology.

In Watch Dogs, due out in November, the player can walk down the street and instantly pull data from any cell phone, or peer through windows using security cameras, laptop cameras, cell phone cameras.

"As with any new technology, we need to consider what privacy issues arise in exchange for a more efficient city," said Kevin Shortt, lead story designer. "Watch Dogs hopes to challenge people's views in this regard. Our protagonist, Aiden Pearce, gains illegal access to this central operating system (ctOS). While his objectives are noble, his methods should raise questions.

"There's a lot of valuable and important debate on privacy and surveillance with no easy answers. It's a discussion that will go on for years and we hope Watch Dogs can help generate more discussions."

Senior producer Dominic Guay believes that video games are intrinsically better equipped to spur these sorts of meaningful discussions than are books, TV or movies.

"You have authorship in both a movie and a game," he said. "Yes you have a level of interpretation in how you see a movie ... but if you're going to be part of the action or engaged in it you can actually experiment. You can answer the same question in two different ways and see the answers to both. So it offers a lot more opportunities for someone to get engaged in not only the story line but more of the meaning behind it.

"That's the goal. It's not necessarily something video games have mastered yet, but I think we are getting there."

Watch Dogs is riddled with those engaging moments. A player has the option to digitally spy on anyone they run into in the city. They can see at a glance that this person is an underpaid school teacher, this person is a short order cook with HIV or this person beats his wife. They can choose to ignore that information, or not even to seek it out, or they can try to get involved. 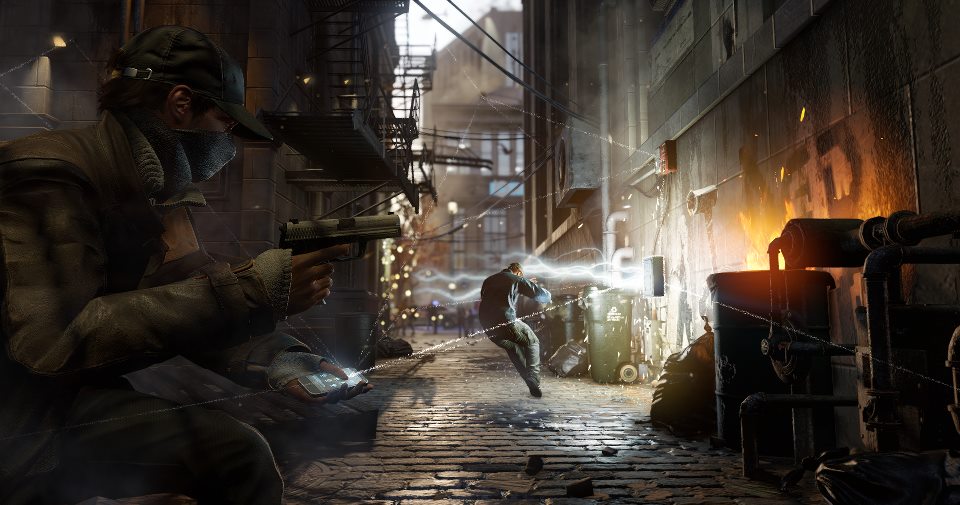 "I appreciate the benefits, the chance to reduce crime and keep citizens safer," he said. "But then I personally don’t enjoy being so closely observed whether it’s at an airport checkpoint or on a taxi camera.

"Civil liberties are always first and foremost. If we start sacrificing our civil liberties in exchange for surveillance, then we’re sacrificing our freedoms. However, I’m not of the opinion that all surveillance represents an abuse of civil liberties. I want cameras in the subway systems. I’m encouraged when I see cameras in public venues. Sadly, today’s world necessitates a vigilante government. But we start abusing surveillance when it moves beyond public venues and into private homes, when people or authorities spring into action based on thin information. These are real-world concerns that I hope Watch Dogs raises in a meaningful way for players."

The debate over balancing civil liberties and mass surveillance was reignited recently by the Boston Bombing and the methods used in the investigation, which was both hindered and helped by surveillance and social networks.

Shortt said that the game and its examination of those issues were the last things he was thinking of when news of the attack broke.

"I've run the Boston marathon a couple of times," he said. "I know well the joy and energy of that Boston crowd, so I was pretty devastated when I heard the news.

"With regards to Watch Dogs, it's been in development for 4.5 years and the game exists in a world where cameras can capture all corners of a city and surveillance is a key tool for our protagonist. It's certainly a reflection of our world today.

"While the use of surveillance cameras in Boston caught our attention, they didn't necessitate any changes to the planning of Watch Dogs. From our early days of development, we've challenged ourselves to deliver a game that's a reflection of the world we live in. Watch Dogs doesn't duplicate our world, but it helps to raise relevant questions about technology and its role, good and bad, in our society."

And that's an important distinction. Guay and Shortt were clear that surveillance isn't meant to be simply a game mechanic in the game. While Watch Dogs is designed to carefully tread the line between demonizing and glorifying surveillance, it sounds like it won't give players a pass on thinking about their decisions and the bigger questions inherent in them.

"Watch Dogs is meant to examine what it is to live in a city with a vastly interconnected network," Shortt said. "We're interested in the questions it raises. What does this mean for privacy and security? What benefits arise from such a system? We believe in technology. It connects our world in amazing ways that allow us to learn from each other far faster than we ever could at any other time of our existence. And that's not something to be taken lightly &mdash; that's pretty impressive stuff! But as we immerse ourselves in this new world of connectivity, it's worth pausing to consider the flip side. As my information becomes less and less private, what does that mean to me personally?

"Watch Dogs is not out to deliver a lesson. We hope the game entertains first and foremost. And we hope players can come away with an experience that reflects on them and raises lively discussions with their friends. If that's the end result of the Watch Dogs experience, then we've succeeded."