The latest update for Team Fortress 2, a major content release dubbed Robotic Boogaloo, is different from the dozens of similar updates from Valve. Like previous updates, it features a comic that ties into Team Fortress 2's increasingly complex and evolving backstory, a new animated short and all-new items for players to collect and craft — 57 virtual items, many of them hats, naturally.

What separates Robotic Boogaloo from earlier additions is that it's 100 percent created by the Team Fortress 2 community. Valve's involvement, at least in terms of content creation, was minimal.

What started as a small, community-driven content push for the free-to-play shooter became something Valve-sanctioned and promoted on the TF2 website. Community members even put the official website hub together, crafting a story that explains why a flood of new robot-themed items and headwear is invading the Mann Co. store.

"The idea is that Grey Mann has gone bankrupt over a year of failed attacks on Mann Co, and attempts to sell his robotic bootlegged creations to the mercs," explained community member Jake "The Heartsman" Harold, one of the driving forces behind today's update.

Robotic Boogaloo follows two major robot-themed updates from Valve: Mann vs. Machine and the Mecha Update. Those two releases added a third faction to the game, Gray Mann's team of robots. Today's update recreates a long list of hats and headwear as if they were recreated by Gray's robots.

"A total of 51 people worked together to create Robotic Boogaloo," Harold told Polygon, saying a smaller team had originally intended to create a small mod website where Team Fortress 2 players could download "robo-reskins."

"Then, when Valve decided to pick up the project, more artists joined, directions were set and a lot more work had to be done on the update presentation content," Harold explained. "We involved people like Populus (who animated our short) and BANG! (who rendered most of the website's artwork). We also decided to work with 2D artists from the community to make pieces based on the items that you can find around the website, in an attempt to make this as community involved as we could. We were even given the chance to put the website together ourselves, with Smashman helping on the code.

"The only thing the community didn't create were the crate and the key."

Currently, the Robotic Boogaloo items are only to unlock through "RoboCrates." Players will need a RoboKey, which sells for $2.49 on the Mann Co. store, to open those crates. They'll become rare drops after June 3, but in the meantime, proceeds from the sale of RoboCrate keys will go to Robotic Boogaloo's artist, writers and 3D modelers.

"That means that everyone involved will be profiting from this update, not just the people making hats," Valve says. 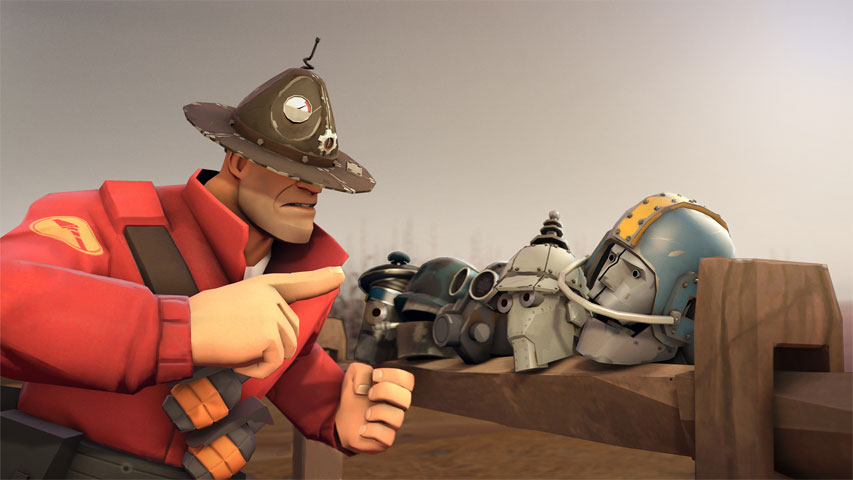 Harold said the task of creating Robotic Boogaloo was "an evolving process" that happened organically and that Valve was largely hands-off during the update's creation.

"We started off creating items before things were official, then when the update got picked up, we started working on the site, reworking the video, and making the comic," he said. "The only brief we had from valve was 'No promo remakes, limited time items or weapons.' Other than that, we had near enough total freedom."

Valve says that despite the major push from the community, it will continue to work on further Team Fortress 2 updates itself.

"This doesn't mark the end of Valve-produced TF2 updates, by the way," Valve wrote on the game's official blog. "As far as we're concerned, there's plenty of room for both to happily co-exist. We're in uncharted territory here, and it's exciting to be exploring it with you."

HBO’s The Last of Us has its first trailer