The last time I played Media Molecule's charming, inventive PlayStation Vita game Tearaway, I mentioned its use of the handheld's rear touch pad only in passing. But playing it again this week, seeing its introductory level, it became more clear how instrumental that method of control unique to the Vita is while playing Tearaway.

In the game's earliest moments, players will spend a great deal of time tapping and rubbing the back of the Vita with their fingertips. Drumhead-like panels, textured with the PlayStation controller button icons, are scattered throughout Tearaway's world. They serve as bounce pads. Tap them and they'll make a pleasing bass drum thump and launch characters into the air.

On other surfaces that look like simple brown wrapping paper, players can touch the back of the Vita, poking their fingers though the paper and into the game world. (A customization screen precedes your first moments of play, an attempt to match your virtual fingertips to the skin color of your real ones.) Poking your fingers into Tearaway's world can push away enemies or move platforms around that help Iota and Atoi progress.

The game's first level uses rear touch pad control liberally as it teaches the player how to move through its papercraft world. But Tearaway lead designer and artist Rex Crowle of Media Molecule says the game's early reliance on rear touch pad controls is not indicative of how frequently it will be used in later levels.

After expressing some hesitation about Tearaway's rear touch controls — a method that can sometimes feel shoehorned into a Vita game — I asked Crowle about the design choice. He said that Media Molecule saturates the tutorial-style levels with that control, but then pulls back on it. Crowle said he wants players to find the appeal in playing with the Vita's rear touch pad, then take it away, hoping that they'll long for it (and better appreciate it) when it later returns.

Rear touch controls, at this stage, feel additive to the experience of Tearaway, rather than tacked-on. In one example, Iota must cross Tearaway's equivalent of a rolling log. A paper tube can be rolled to the right by pushing one's finger against the rear touch panel, then pushing the platform to the right, enabling progress. To the left, however, is some collectible confetti. To reach it would require some finger dexterity, rubbing one's finger slowly left, pushing the log, while also controlling Iota with an analog stick, pushing him right — the Vita version of patting your head and rubbing your tummy. 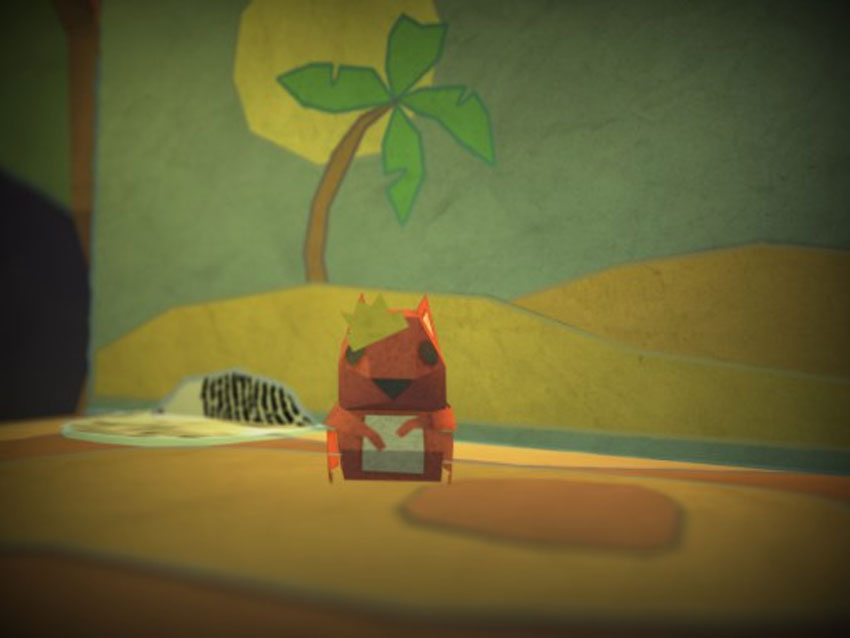 Another component of Tearaway that I didn't get to experience the last time I played it was its in-game photography. I took my first snap in Tearaway while in the company of a papercraft squirrel, who requested I make him a crown from a piece of paper. After drawing my finger across a sheet of gold paper, which a pair of scissors then cut into something vaguely crown-shaped, the squirrel asked for a photo of him wearing the crown. I obliged with my virtual camera, and an Instagram-flavored photo was snapped.

That picture was then uploaded to the Tearaway website — where players can have their own pages filled with shareable in-game moments — and tweeted to me by Media Molecule's Siobhan Reddy, the studio director of the LittleBigPlanet developer. Media Molecule is making it easier to share Tearaway moments like that squirrel picture and the real-world papercraft creations people will make through social networks like Twitter and Pinterest.

The latter, a burgeoning social network where members pin, like and share things like artwork, fashion, recipes and photos, is already being employed by Media Molecule. On its Tearaway Pinterest board, the developer is showcasing the papercraft elk, reindeer, wendigo and squirrels players have already created. And since Tearaway players can craft pretty much everything in the game's world, expect that board to be flooded with items when the game comes to PlayStation Vita.