Adventures with Facebook's take on Plants Vs. Zombies

Share All sharing options for: Adventures with Facebook's take on Plants Vs. Zombies

Video game Plants Vs. Zombies, master of smartphones, tablets and computers, makes a leap to Facebook this week with an intriguing twist on the game's winning formula.

In Plants vs. Zombies Adventures, players will still protect their home from an army of cartoonish zombies with defensive plants, but now they'll also take to the road, traveling in a beat-up RV to zombie hot spots where they'll have to defend their home on wheels from zombies that can attack from any direction. And those defensive plants now have to be grown ahead of time.

The game brings with it ten new zombie types, 11 new plants, and most importantly, a personalized neighborhood that players will work to customize, expand, and, yes, defend from roving bands on zombies.

Where the original Plants Vs. Zombies had the player defending from zombies that always marched across horizontal lanes of grass, this new Zombies game has the zombies attacking along cobblestone pathways that sometimes criss-cross, turn right angles or divide.

The game also allows players to call in zombie hordes on their Facebook friends who play the game. The more a person plays, the more zombies they unlock that can be unleashed on friends. That inherent Facebook social structure was one of the key reasons developers PopCap Games decided to make a Facebook version of the game, said Curt Bereton, executive producer for the free-to-play game.

"Facebook itself provided some unique opportunities and challenges," Bereton said. "One of the opportunities with Facebook is that it makes playing with your friends that much easier because they are already connected."

Mathilde Pignol, creative director for the game, said that the concept started with idea of a town as a place where you needed to grown your plants and defend from zombie attacks.

"Having a home base that you could expand and customize to defend from stronger zombies over time also provides a central social hub where your friends can visit and play," Pignol said. "In addition to the town, we really wanted a place for the new combat mechanics to shine. That needed to be in a place all of its own so we could use the whole screen and give you more room to play."

Since the town cedes control of how zombies might attack over to the player through customization, the team decided to add the element of road trips to the game so developers could create their own settings.

"Once we figured out the town as your base and battles as a road trip, it all came together to create a pretty unique combination of gameplay that we think both existing PvZ fans and players who are new to the franchise will find to be a refreshing change from what they've seen before," she said.

The game opens with players in a town enshrouded in fog. Initially, players can only explore their own yard. The small plot of land includes your house, a shed, a cobblestone path to your door, ten planter boxes and a driveway with an RV sitting in it.

Players earn coins from their home, shed and other buildings. Those coins are used to plant the seeds used to grow a crop of zombie-killing plants. New coin-earning structures can be purchased with Zombucks, which are earned during road trips. Road trips take place through a dozen maps, each with a set number of levels, or stops along the way. Each stop pits your RV against encroaching zombies.

The actual zombie combat is very similar to the original game, but with a couple of twists. The most noticeable change is that players now have to defend along a pathway that isn't always straight. The other big addition is the ability to spray plants to give them a quick boost or revive them after they've been eaten. You can also spray zombies to freeze them. Spraying does cost game currency.

Working your way through a map typically also unlocks the items needed to empty the fog from adjacent plots of land in your neighborhood. As your neighborhood expands, you get more space to build money-earning buildings, more planter boxes, more special items, but also more places that you need to defend from zombie attacks.

The end result is a game that marries the light tactics and fun of the original Plants Vs. Zombies games with an element of planning, exploration and expansion and tosses in social gameplay for good measure.

I enjoyed my time with the game so much it left me wanting to play it in ways that didn't have me sitting at my desk. Bereton says that if the Facebook version of the game goes well, moving it to other platforms, like smartphones and tablets, is certainly a possibility.

But both Pignol and Bereton added that their current plans for the Facebook version have just started. Along with new plants, new zombies and new settings, the developers also plan to push the social mechanics of the game.

"One of the great opportunities of Facebook games is that launching the game is really just the beginning," Bereton said, "and we're looking forward to the ideas we already have in-the works as well as the ideas the fans want us to try out." 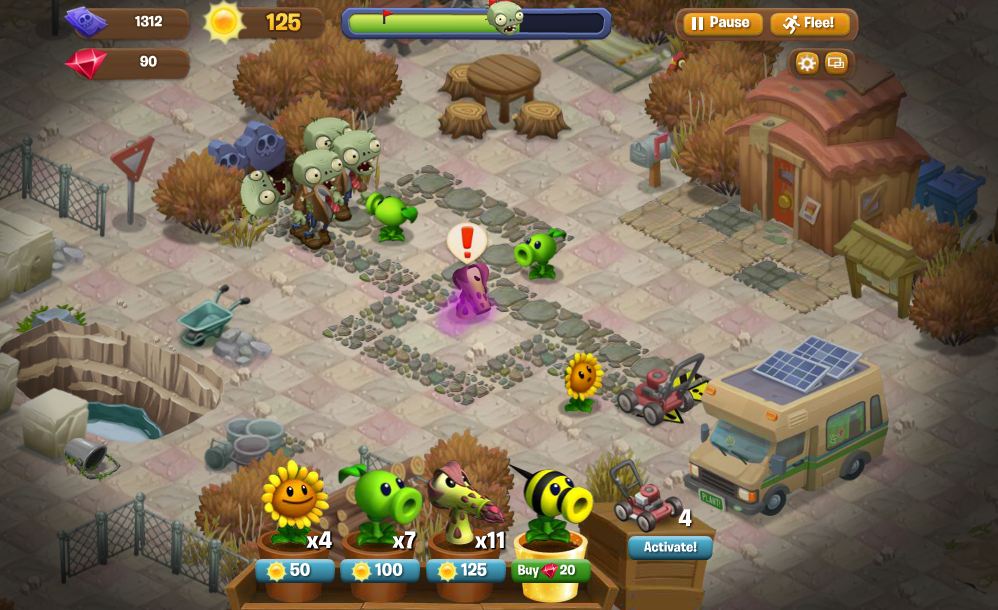