Ghost of a Tale: Why a Dreamworks animator left film for a gaming pet project

Share All sharing options for: Ghost of a Tale: Why a Dreamworks animator left film for a gaming pet project

Former DreamWorks Studios animator Lionel Gallat left his job to make a game. A blossoming interest in interactive media and the desire to build a world filled with his favorite elements of fantasy fiction drove his transition. And though he says moving to games was easy physically, technically and emotionally it's a whole new world.

Gallat worked at DreamWorks for 11 years, where he served as supervising animator on a number of films including The Prince of Egypt and The Road to El Dorado. The idea kernel that would eventually grow into Ghost of a Tale began while he was still with the company, working on big-budget movies as part of a larger team and without much time to develop his own ideas.

"When you work with a big team, everyone has an opinion and of course it's a little bit difficult to find something more personal to put in," he said. "Ghost of a Tale started from a desire to do something different, something that I would like and that could be a bit more personal."

Gallat began developing his game parallel to his full-time animation job, filling his evenings and weekends with what would become a vast medieval-style world populated with chattering animals.

"I was trying to shape the ideas I had for the story, like who the enemies would be, what appearance they would have, and that would feed back into the full story," he said. "That's when I really started thinking about my characters and decided they would be animals.

"At the time I was a little fed up with the human characters that I would see in video games; usually I didn't very often see something that was appealing to me in terms of character design," he added. "I thought, there is a way to do something different but not just for the sake of trying to be different. I was sure there was a story to tell and that I could use my experience working on all those movies to shape a game that would allow you to explore [a new] kind of universe. But not just as an audience watching — there would be a form of interactivity."

Gallat cites Disney's animated films starring talking animals as a major source of inspiration, naming the Winnie the Pooh franchise and Robin Hood specifically. He is also a fan of the Redwall books and The Secret of Nimh, both of which are stories of small mice overcoming hardships in fantastical worlds. Gallat loves these types of stories because they firmly belong to the imaginary world but still contain nuggets of realness to them.

"At no point during [them] do you wonder, 'Okay, is this a real world?' It's different," he said. "It's like a translation of things that we know. For me it's a mixture between something you can believe in, in terms of credibility, like the world, the water, the rocks, the architecture. But it's transposed through these fantasy characters and that makes it more fun, more interesting."

Gameplay in Ghost of a Tale is based on exploration and encourages players to discover what makes the world tick on their own.

"You are thrown into an adventure and you don't really know much about where you are and what you're trying to do," Gallat explained. "I'm not playing the trope of the amnesiac character, but you will have little nuggets of info at some points so you have a sense of what's happening and what your goal is."

Gallat added he wants to keep the interface as simple as possible, and will not add directional arrows on screen or include fetch quests that involve hunting down and talking to people. There may be a "little bit" of melee combat in the finished game, but Gallat is playing up the stealth aspect and wants to encourage players to find their own ways around obstacles.

"I want to play up the aspect of a mouse being in a dangerous world," he explained. "You won't be like Link [from The Legend of Zelda], picking up stuff and becoming very, very strong and killing enemies, that won't happen in this game.

"I'm going to go much more towards the stealth option, and encourage players not to attract the attention of enemies. I think that will be much more interesting and specific to the mouse character. You will have different ways of confrontation, like building traps and using different enemies against each other, or throwing things."

Gallat also hinted magic would play a part in Ghost of Tale, but at this time is unsure just how much.

The animator's affinity for the childlike wonder that comes with the idea of talking animals does not mean his game will be aimed at children. But nor does it mean it will include gratuitous violence.

"The reason I loved The Secret of Nimh and the Redwall series is because they use animals to tell normal stories, stories you can relate to," he explained. "It's not going to be directed at children in the sense that I'm not doing a Nintendo-style [family-oriented] game. But it's something that I think appeals to kids and that is very safe. I'm not aiming for that, but at the same time I'm not going to try and be especially edgy in terms of profanity, violence and blood.

Ghost of a Tale initially began as a short film, but "just didn't happen," Gallat said. He decided to form the story as a game out of a desire to do something different than his job as an animator.

"When I saw it would possible for me to make [my] characters and put the same care that I would put into movies into a game, and on top of that be able to interact with these characters I made and run around and discver all this stuff... For once it wouldn't just be a stuck camera, not just one angle," he explained. "To be able to put it together as an interactive thing to me is more interesting now than just telling a story through a more common medium.

"I think gaming shares a little DNA with animated movies, but it's also very different," he added. "I'm not trying to make an animated game that will look like a movie, that's not my goal. I understand some developers are trying to do that and it seems to be a trend, to have games look like movies. But that's not at all my intention." 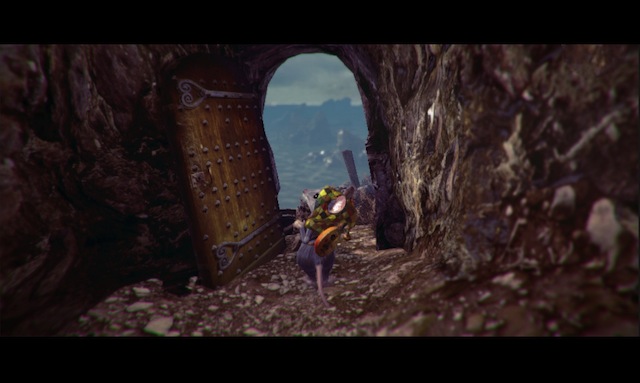 Gallat is still unsure about including cutscenes and other non-interactive cinematic elements in Ghost of a Tale, even though as an animator staging scenes is something he loves to do. But the story he wants to tell is one he wants players to piece together on their own, and "flashy" cutscenes will only break up the flow of gameplay.

"I would like the game to tell you the story through gameplay and through what you discover on your own, in the things you will read and understand, and if I can do away with cutscenes in a traditional sense, like the ones they have in Tomb Raider or BioShock Infinite for example, then I would be very happy."

Gallat says animating for games and for film are not too different programming-wise, but at the same time there are a lot more technical elements to take into account when piecing a game together. Gameplay mechanics add an entire new interactive layer to the experience, and the story must have a certain kind of draw that will keep players wanting to push through it. That, and both of these things take more time to complete — you're not simply piecing together a narrative and painting pictures, you're building a world your viewer will be actively exploring.

Currently Ghost of a Tale is slated to launch next July, though Gallat admits that if things get sticky it may not release until late 2014. He wants to be straightforward to the backers of his Indiegogo crowdfunding campaign, which exceeded its initial funding goal earlier this month and will allow Gallat to hire more developers to work with him on the title. He has honed his focus on Ghost of a Tale for now and is not working on any films at this time.

"It's my first game, I'm trying to find stuff that I like and that I think is going to work," he said. "It's fun. But I'm being very careful."