Brosie the Riveter's got guts: Pranking your CEO and pushing for gender equality

Share All sharing options for: Brosie the Riveter's got guts: Pranking your CEO and pushing for gender equality

Jokes can have consequences.

Two employees at a video game publisher called out their company's CEO with a playful but pointed prank, and instead of being reprimanded, they were praised — by the CEO and by the wider gaming community — and the inside joke has become another small milestone on the march toward gender equality in the gaming industry.

Adhesive Games' Hawken is a free-to-play shooter featuring mech combat, and one of its pieces of promotional artwork features a giant green robot suit. The mech, however, stands in the background, obscured by a shapely young brunette woman holding a welding torch and a flint spark lighter — and baring not just her torso, but the bottom half of her breasts. "You are free to fight," reads the tagline on the poster, for which artist Justin Hampton drew inspiration from World War II-era "Rosie the Riveter" propaganda.

Mark Long, the CEO of Hawken publisher Meteor Entertainment, is a partner at Roque La Rue, an alternative art gallery in Seattle, and an avowed fan and collector of what's sometimes known as "chick art," he told Polygon over email recently. Long loved the Hawken poster so much that he had it blown up and framed so he could display it outside his office at Meteor.

The racy artwork irked some of the employees at the company, including a woman who works with an all-female team of data scientists there. But nobody said anything about it to Long, and at Meteor's holiday party last December, he was having everyone at the company sign it. That's when the woman came up with the idea for what she referred to as an "affectionate experiment" in an email to Polygon she signed with the pen name "K2."

"I think we are so used to this norm in gaming that it didn't occur to us to raise [the question]," she said.

K2 enlisted the help of a co-worker named Sam Kirk, an artist at Meteor, to play a prank on Long. Kirk created a version of the Hawken poster that recast the subject as a bearded hunk sporting a wrench, wearing nothing but a banana hammock and a helmet. K2 and Kirk took the poster, which they lovingly refer to as "Brosie the Riveter," and early on the morning of April Fool's Day this year, they snuck into the Meteor office and swapped out the original poster for the one featuring Brosie. 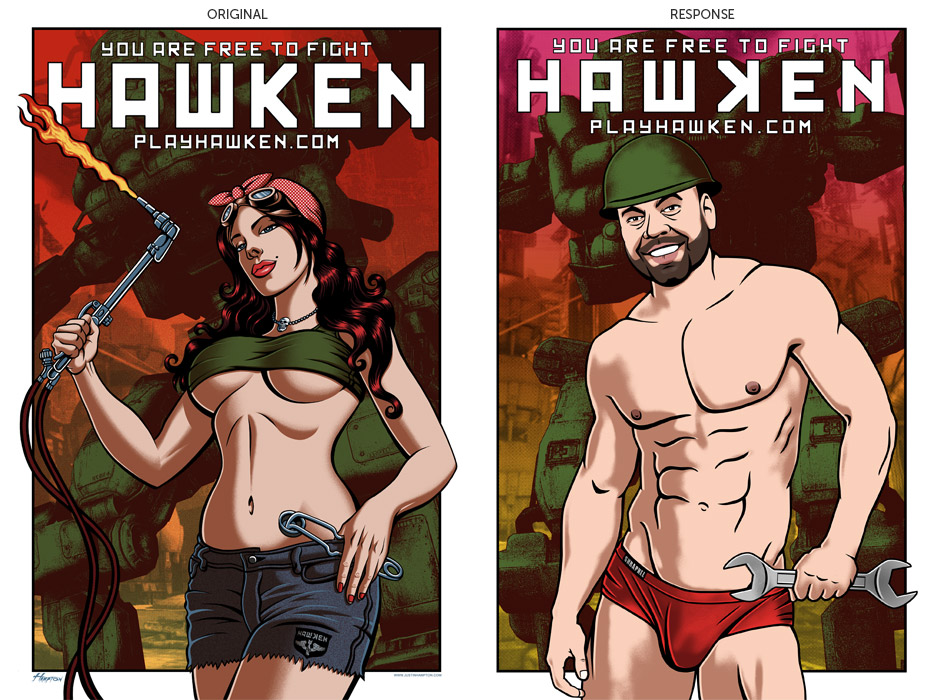 Long found the poster and was initially taken aback. But according to the story as recounted in K2's anonymous submission to The Hawkeye Initiative, a blog that highlights the often absurd differences between the portrayal of male and female characters in comics and games, he came over to K2 shortly afterward and told her, "You called me on exactly the bullshit I need to be called on."

In an email interview with Polygon, Long corroborated K2's story, saying he was "guilty as charged," and that he was rightfully "April's big-ass fool."

K2 said she was aware of some female co-workers who were also annoyed by the art, but no one had discussed it in the open — "the conversation hadn’t progressed beyond eye rolling."

Kirk agreed with K2, but according to her, there were plenty of other men at Meteor who shared their opinion of the poster. "What surprised me most was the many male co-workers who came out of the woodwork after the prank was played, who had been bothered by the picture from the get-go," she said.

K2 noted that for a company in the gaming industry, Meteor was already doing better than most in this area. "Meteor's culture around gender politics has always been a head and shoulders above the industry at large," she explained, after pointing out that half the company's executive team is female. But the episode has brought the subject to the fore within Meteor, and all parties agree that they can feel change coming.

"We are a very friendly and familial group ... We're also not afraid to dive in and debate"

"I really, really want to say no," said Long, when asked if the prank has changed the way he thinks about publishing games. "But the truth is it has."

Long said he has tried to be supportive of gender equality — Meteor sponsored the launch party for the book The Better Bombshell, a collection of literature, journalism and art addressing the lack of female role models in media. "But that's a long way away from the day-to day realities of a being a publisher and the more important appropriation [of] 'chicks' going on in the game industry," he said.

"We are a very friendly and familial group over here; we express affection by annoying each other. We're also not afraid to dive in and debate," said K2 of her Meteor co-workers.

Kirk explained that although he "[doesn't] feel a genuine culture shift" just yet, Long's somewhat surprising response to the prank allows the discussion to continue. "Mark's embracing reaction set a great precedent. When you set your [sights] on the top of the totem pole and get a response as welcoming as his, it's encouraging and only promotes more discourse."

Long closed his email with a quote from the classic Beastie Boys track "Sure Shot" — specifically, the verse in which MCA, the late Adam Yauch, argues against misogyny in hip-hop and even in the Beastie Boys' own work:

K2 is collecting more funny stories about gender politics on the Gender Shenanigans Tumblr. Both Rosie and Brosie are now hanging side-by-side outside Long's office.