Share All sharing options for: How Ghost Games hopes to put itself on the map with Need for Speed Rivals

Need for Speed Rivals is the next installment in EA's prolific racing series — a series that every gamer is certainly familiar with. Less familiar is the team that is actually making Rivals: Ghost Games, an EA-owned developer based out of Gothenburg, Sweden.

The team, operating under its former name EA Gothenburg — a moniker it would officially exchange for Ghost Games last fall — began putting together a team two years ago with a specific purpose: To make a Need for Speed game. That was the studio's guiding light, executive producer Marcus Nilsson told Polygon in a recent interview; Gothenburg would be EA's Need for Speed development house.

"It all starts from the ground up, from the decision to make a new studio for Need for Speed games," Nilsson said. "We really wanted to build a new Need for Speed studio that could bring a new energy and new innovation, really, to a genre that needs innovation. Also, we always knew we had a lot of good people in Gothenburg that we could build a strong team, we knew we could make good use of those great developers."

The company began hiring immediately, building a core team of developers who could begin working on the most important (and, due to the number of fine tunings required to get it right, most laborious) process: Getting the core driving mechanics down perfect.

The first thing Nilsson did, he said, was collaborate with Criterion creative director Craig Sullivan, who was working on shipping last year's Need for Speed: Most Wanted. Ghost Games started recruiting former employees of racing game developers like Turn 10, Rockstar, Bizarre, Playground and even Criterion. They worked tirelessly on getting the feel of racing just right, and then turned to what ended up being the biggest focus for Rivals during its development: A seamless multiplayer formula called AllDrive.

"AllDrive is fundamentally a way for us to destroy the line between single-player and multiplayer," Nilsson said. "It is a way for you to play the game single-player, through the world collecting points and leveling up. I can join your world — and the world's pretty big, we don't have to drive together since I can be on a different part of the map, but since we're in the same world, our paths can cross. If I'm in a race, and you're a cop, you can go after me, or if we're both cops, we can go after racers.

"The interesting thing is, we don't have a single-player or multiplayer mode," Nilsson added. "You have one mode which you choose how to experience." 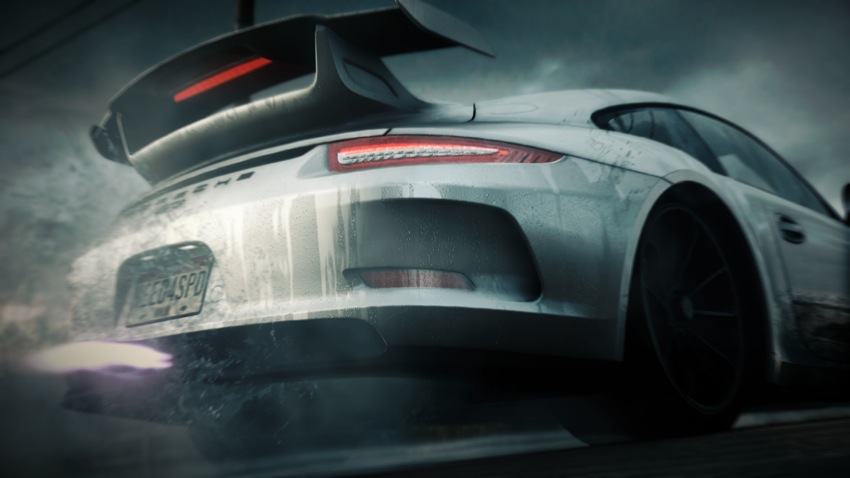 The game will change around you based on how many players seamlessly cruise into your world, Nilsson explained. Mission parameters can change when a friend jumps in to help out or compete, targets for co-op missions can similarly change as needed. Of course, if you'd rather not deal with the hassle, you can change permissions on who AllDrive lets into your game — you can open it to the public, to your friends or play a totally private game all by yourself.

It is not, Nilsson reassures, an always-on experience, as players don't need an internet connection to race or chase by their lonesome.

Returning players who liked Most Wanted's open world, chock-full of jumps, speed traps and unlockable cars will be happy to hear Rivals will feature a similar set-up. It's partially because of how successful that world was in Most Wanted; but it's also because AllDrive probably wouldn't work in a more menu-centric format.

"AllDrive would not work if you had a map you picked your races from," Nilsson said. "Well, maybe it could, but I can't envision that to actually function. Rivals is absolutely an open world game. You'll drive around, find your gameplay in the world, whether its collectibles, or racing, or stunt jumping or going through speed cameras. It's a world that's pretty filled with content, which your friends can seamlessly join in with what you're doing in the game."

The open world was just one of the successful elements from previous entries in the series that Ghost Games decided to renew. The studio also looked to franchise entries like the Underground series for cues on aesthetic vehicle customizations, which will play a much larger role in Rivals than it has in recent games. Performance upgrades, paint jobs, decals, rims and license plates can be modified to showcase player personality. It's designed to let the player take ownership of their ride, an especially important trait given racers' inherent interconnectivity.

"In this game, where we have AllDrive, you'll be in the same world as other people," Nilsson said. "We think it's a really natural drive to express who you are through your car."

Ghost Games also hopes to refine the Cops vs. Racers aspect of the Hot Pursuit series by fundamentally separating how the two halves are played, Nilsson explained. Their cars handle differently, the rewards they earn are different, they manner in which they earn Speedpoints — Rivals' all-important currency — are different, as are their progression systems.

"There's really a clear identity to each side," Nilsson said. "You can imagine the identity of how it is to be cop compared to how it is to be a person racing as fast as they can just to show off to their friends. The difference between this game and other games that we've done with this mode in the past is we've totally disconnected the two experiences."

The development team has also expanded the gadgets the two sides will have at their disposal as they attempt to capture and elude one another. The tools are all grounded in reality, Nilsson said, ranging from spike strips and helicopter recon to EMP devices. Your tools, which will be just as upgradeable as the cars which carry them, won't shift the game's focus from driving to automotive combat.

"We're absolutely not talking about machine guns, or lasers or anything like that," Nilsson said.

Need for Speed Rivals won't just be one of the first titles to utilize the Frostbite 3 engine, it will also be one of the first games on PlayStation 4 and Xbox One later this year. The next generation of hardware offers some obvious benefits, like better rendering for the graphics-heavy engine — Rivals on next-gen will look "quite dramatically a lot better," Nilsson said. It will support more simultaneous online players. But it also has less tangible benefits, he explained, like the way it helps breathe life into the typically lifeless world of a racing world devoid of humanity.

It's an ambitious project for any studio, but perhaps exponentially more ambitious for one that doesn't have a released product under its belt yet. Nilsson recognizes the challenges his studio faces, and is confident they can overcome each and every one of them.

"We're doing cutting edge stuff on cutting edge platforms while we're building a team and new studio at the same time," Nilsson said. "We have an aggressive feature set, and we want to put Ghost on the map.

"Is it easy? No, it's the hardest thing I've ever done in my 10 years in the industry," he added. "But for all that, it's equally rewarding to make it happen."