Nvidia wants to make your life easier, whether you're a hardcore PC gamer or someone who doesn't understand the inner workings of graphics technology.

PC gamers have been capturing gameplay footage for years, but today Nvidia announced a new tool that it says will simplify and enhance the process: ShadowPlay, video capture software that the company plans to release this summer.

ShadowPlay functions as a DVR of sorts for PC games — when enabled, it will automatically record up to the last 20 minutes of gameplay on a rolling basis. Once something cool happens, you can press a hotkey, and ShadowPlay will spit out a video file that you can upload to the web.

ShadowPlay is exclusive to Nvidia's Kepler architecture, the company's 600 series graphics cards, because Kepler cards feature the hardware-based H.264 video encoder that the tool requires. The powerful video compressor is also one of the reasons that Kepler GPUs are required in order to stream Windows PC games to Shield, Nvidia's upcoming Android-based handheld gaming device.

Chris Daniel, product manager for GeForce, told Polygon in an interview last week that thanks to the dedicated video compressor built into Kepler hardware, the performance hit from ShadowPlay is "minimal" — 5 percent or less, which is significantly lower than with typical video capture software such as Fraps. Right now, ShadowPlay simply dumps an H.264-encoded video file on your hard drive, but according to Daniel, Nvidia plans to eventually tie in services like YouTube for direct upload functionality.

"In the future," he said, "we're going to work on integrations to help people get [videos] up a little quicker."

the performance hit from ShadowPlay is "minimal"

ShadowPlay won't be available until this summer, but today, the company is launching another piece of software intended to simplify PC gaming. At its pre-CES press briefing in January, Nvidia announced GeForce Experience, a two-pronged utility intended to facilitate playing PC games with the latest and greatest graphics settings. Nvidia has been running a beta for the past few months that has been downloaded more than 2.5 million times, and the company is launching GeForce Experience today, with plans to continuously update it in the future.

Here's the idea behind GeForce Experience. While gaming on PC offers the best experience for players with capable computers, the nature of PC games is that they typically require users to understand a wide variety of graphics terminology and tweak visual settings themselves in order to get the smoothest, best-looking experience. And that experience will vary greatly depending on hardware configurations, whereas gaming consoles offer a single hardware standard for developers to design to, said Daniel.

"In the way that console [gaming] is very simple," said Daniel, "one of the benefits for [GeForce Experience] is that it brings some of that console simplicity of plug-and-play to the PC gaming market."

The current GeForce control panel that runs in the Windows system tray notifies users that new graphics drivers are available, but it kicks them to the Nvidia website, where they have to download and install the drivers themselves. GeForce Experience provides a pop-up notification for new drivers, and with one click, users can have the software download and install the drivers without having to visit the Nvidia site. The same goes for individual game profiles and SLI profiles. 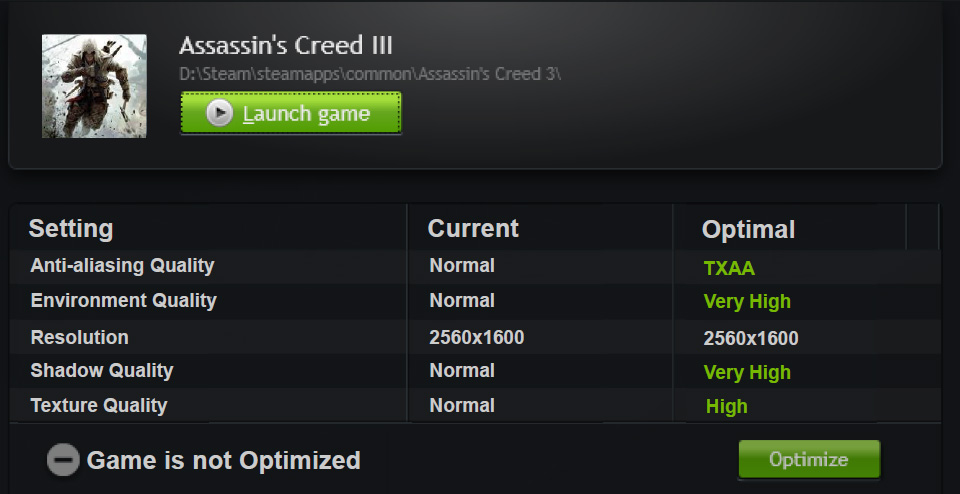 The other side of GeForce Experience is that for certain games — 70 titles including Borderlands 2 (top image) are currently supported, and the list is always growing — Nvidia will analyze your computer's hardware configuration and, with one click, optimize visual quality to give you the best experience your machine is capable of providing.

Nvidia plays each game to determine which settings matter more for a particular title, and sets minimum and average frame rates as a target (usually from 40-60 frames per second). For example, a game might have been developed to look fine without anti-aliasing turned up all the way, and might instead benefit from higher texture or shadow quality.

Nvidia figures that out on a game-by-game basis and prioritizes individual graphics settings with different weights in its formula. Then, GeForce Experience compares your computer's specifications with its algorithm, attempting to meet the target frame rate while enabling the highest-quality visual settings your PC can handle.

"We do all that work on our back end, on our server farm, to calculate that for customers and deliver those [settings] through the cloud to the PC gamer," said Daniel.

GeForce Experience's algorithm is also used to optimize game settings for Shield streaming, where the image is only 720p resolution but must be beamed wirelessly to the handheld. According to Daniel, Nvidia believes GeForce Experience will be useful even for hardcore PC gamers, the people who are familiar with terms like ambient occlusion and anisotropic filtering. "If there's a super-high-end tweaker, they can use our settings as a baseline and tweak from there," he explained.

"But for the average gamer, who will just play out-of-box or doesn't want to spend time tweaking settings, this is a great one-click experience."