The video game-inspired art exhibition iam8bit returns to Los Angeles, Calif. next month, highlighting the work of more than 80 international artists who will translate fond memories of classic 8-bit and 16-bit games into fine art.

The seminal art show, which first opened in 2005, will feature a culturally broader and further reaching pool of talent this year, according to Gibson.

This year's iam8bit, the sixth of its kind, will showcase the work of established gallery artists, including Jose Emroca Flores, Gerald de Jesus, JC Richard, Rex Crowle, Jim Mahfood, Edison Yan, Olly Moss and Aled Lewis. It will also include the work of artists who don't normally participate in gallery exhibitions, Gibson says.

"This year's show is a little more worldly in its approach," Gibson told Polygon. "We have a lot more artists in general from Japan," he said, part of an effort to work with a larger non-English speaking group of painters, illustrators and sculptors. Gibson says he and his fellow iam8bit Gallery co-curators sought out concept artists and the occasional, unknown artist who might have caught their eyes on a friend's Facebook feed.

Gibson said the artists selected for this year's show, a mix of new and returning artists, are challenged to "mine their childhood memories, not just for nostalgia, but for what was emotionally impactful to them." The iam8bit team, including iam8bit Gallery co-founder Amanda White, works with those artists to help guide their pieces, something Gibson believes helps separate iam8bit from similar video game-themed art shows.

iam8bit's video game art show also distinguishes itself with large scale, interactive artwork. In previous years, this has included installations like a giant Atari 2600 joystick, which stood more than six feet tall, but was fully playable. This year's iam8bit show will feature one that Gibson says is "the most epic thing we've ever done, experience-wise."

"It's pretty rad and it's super nostalgic," he said. "What we're letting people play with will fulfill many childhood fantasies."

The iam8bit Entertainment System exhibition will take place at the iam8bit Gallery in Echo Park, Los Angeles. The show opens Friday, June 7 at 7 p.m. and will run through June 30. 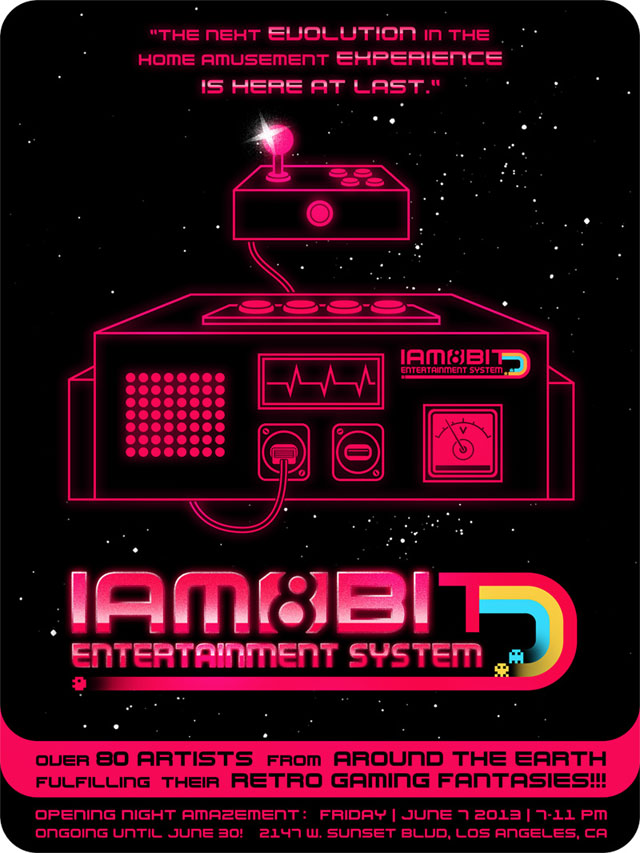