Puzzle in the picture: how Gorogoa brings art to life through mind-twisting challenges

Share All sharing options for: Puzzle in the picture: how Gorogoa brings art to life through mind-twisting challenges

Gorogoa is an illustration-heavy, interactive puzzle game from the mind of indie developer Jason Roberts. Players are presented with four tiles, each of which feature different parts of a world, with little instruction. The idea is to stack, combine and explore images and to make the connections that have been there all along.

"People see the solution before they get to it," Roberts said. "That's the idea."

Roberts demoed a short section of the game for us at Indie Press Day in San Francisco. In one puzzle, the player must zoom in and match up different parts of the location, which then drops an apple into a bowl. Another requires the player to create a coin in order to board a train. Roberts said his inspiration for puzzles is drawn from the world around him. 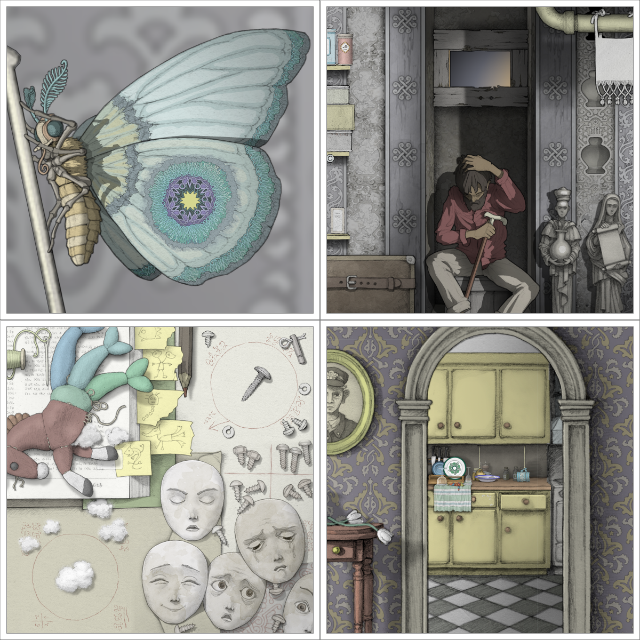 The game sparked from a very different sort of concept, which Roberts eventually scratched in favor of something simplified. The idea was to take interactive comic strips and turn them into a card game where you could alter the content.

"Every card was sort of a window into its own little world," Roberts said. "You could change their rank, suit, and thereby effect the game. I decided that idea was too complex and also amounts to cheating."

In 2012, Gorogoa caught the eyes of judges at Indiecade and snagged the Visual Design Award. The game's art is a winning combination of color, everyday locations and unusual shapes. It's not hard to guess that Roberts spends most of his time making Gorogoa's visual elements appealing.

"The art is the thing I spend the most time on, but that's not really difficult because I almost enjoy doing that too much," Roberts said. "The hard part is knowing what is good enough. When to stop. How to budget my time appropriately, what order to do things in."

Gorogoa is currently being developed for Windows PC and Mac, with mobile launches to follow. The demo is available through the game's website.