Wolfenstein: The New Order and finding balance between old and new

Share All sharing options for: Wolfenstein: The New Order and finding balance between old and new

MachineGames takes the reins of id Software's Wolfenstein to create a game that combines the familiar with the modern, implementing old-school, first-person shooter mechanics with an updated twist. Wolfenstein: The New Order spans decades, both in its narrative and gameplay decisions.

The new Wolfenstein's story straddles two time periods, beginning its tale of global Nazi domination in the year 1946, when an alternate history World War II is "a little bit into overtime," says The New Order creative director Jens Matthies. The game will open with a familiar, classic Wolfenstein feel, Matthies says, but players — and protagonist William "BJ" Blazkowicz — are then thrust 14 years into the future.

Two decades on, the Nazis have won the second World War, conquered the planet and, with the help of a vast army and Nazi-engineered robots ranging from mechanized attack dogs to towering bipedal mechs, maintained oppressive control into the 1960s.

Blazkowicz, having spent that 14-year span in a coma, awakens to find himself without an army. But he does find an ally in a burgeoning resistance movement intent on taking down the Nazi regime.

"For us to be able to set it in a world where we've pushed the timeline forward," Matthies explains, "and the Nazis rule the world — because they have access to some sort of mysterious technology that they've been able to implement in their war machine — that means that everything goes. Whatever cool idea we have, if we want to do a Nazi robot, we can do that. If we want to do some crazy laser weapon, we can do that. It's all achievable in this world.

"We take [Wolfenstein] in a direction it's never been before, but we don't violate its history."

"We're also really big on aligning the player's experience with the protagonist's experience," he says. So when Blazkowicz takes his first steps into a strange Nazi-dominated world, so too will players. "We want to reveal this world to BJ as we reveal it to the player. When you emerge in that new world, you get that same revelatory experience that he has."

"We wanted to utilize what the Nazis were planning in terms of architecture, and obviously they needed some time to implement that, even though they are supercharged technologically," Matthies says. "Also, the '60s is very interesting in terms of the cultural impact that decade had. The fact that now the Nazis rule everything, those familiar cultural expressions aren't realized — or at least not in the way they are in our world. Everything's from this Nazi perspective."

In The New Order, we'll see familiar pop culture references distorted through a Nazi lens. The moon landing, for example, will be a Nazi-achieved victory in The New Order. Players will discover that as they navigate and do battle in a Nazi planetarium that commemorates the alternate-history feat.

"The 1960s were a time of exploring freedom, taking a stand against war," says Tommy Tordsson Björk, MachineGames narrative designer. "Our '60s is the total opposite. It's total oppression and restriction of freedom."

Despite the time warp, Matthies says The New Order stays true to the storyline presented in previous Wolfenstein games, the most recent of which was id and Raven Software's Wolfenstein. MachineGames' take on Wolfenstein is not a reboot or a retcon, simply the next step in BJ's story.

"We take this game in a direction it's never been before," Matthies says, "but we don't violate its history. What happened happened; we're not messing with that. In some ways it's a sequel, but you don't have to look at it that way if you don't want to. If you're brand new to what Wolfenstein is, you'll be fine starting with this game."

MachineGames did go back to the original Wolfenstein 3D, released in 1992, to shape the finer points of BJ Blazkowicz's personality, which is on display in The New Order's cutscenes and in the occasional inner monologue. BJ will sometimes comment on the sticky situations he finds himself in, lamenting for a simpler time, when Nazi soldiers — not Nazi robots — were his greatest challenge.

Expect "a lot of depth to his personality that maybe hasn't been present in previous games," Matthies says. It's something that couldn't have been realized in Wolfenstein 3D, Björk says, but that BJ's personality will be consistent with what players would have inferred from his 1992 introduction.

"He's this sort of muscle-bound action hero and, instead of shying away from that, we've embraced it and we honor that, but we also layer in levels of depth to the character to create a real human, basically," Matthies says.

"He is a Nazi ass-kicking machine, but he's more than that. He's a person, too." 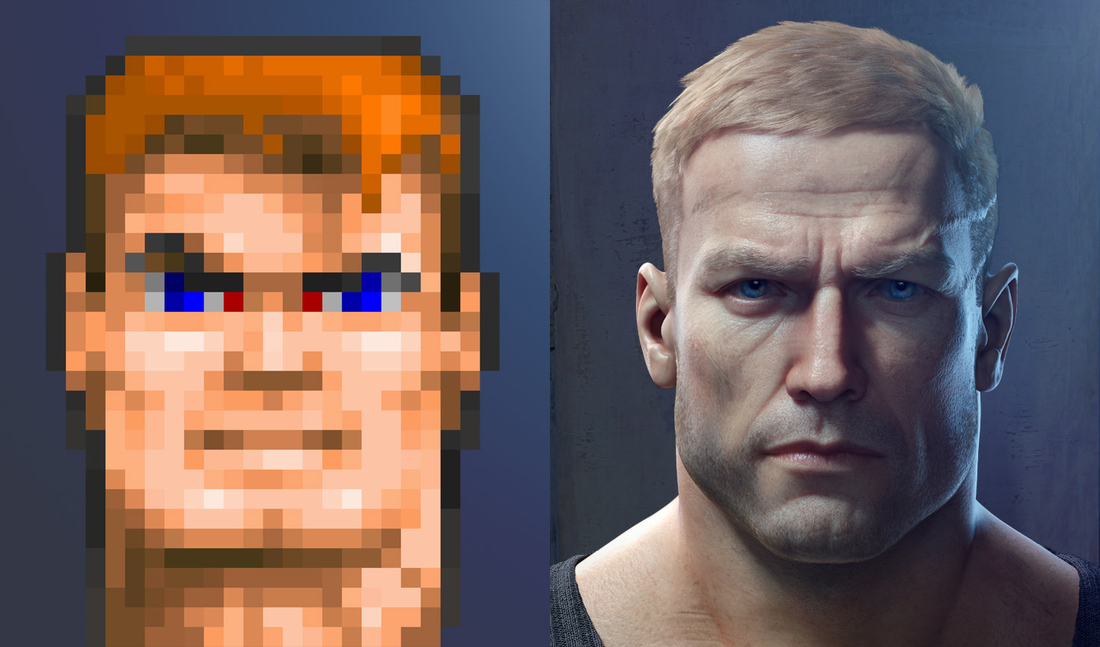 Wolfenstein: The New Order plays like a game caught between two time periods, as well. In one example, MachineGames combines the modern regenerating health system popularized by first-person shooters like Halo and Call of Duty with one that also relies on picking up health kits and body armor. To fully restore BJ's health and protect him from gunfire, players will have to scrounge for health-restoring medkits and armor. Collect enough, and BJ's health will overcharge well beyond a full 100 points. BJ can also regenerate health simply by staying out of harm's way. But he can only regenerate hit points in 20-point increments. Should his health drop down to 50, he could rest and regenerate it automatically up to 60, for example.

Björk says that combination of classic and modern health systems — as well as the hiding of ammo, health and armor behind hidden panels and secret passageways — is MachineGames' way of paying tribute to games like Wolfenstein 3D.

"Another thing is other games of the modern era have a lot of auto-aim in them, whereas in the olden days there was none of that," Matthies explains. "You had to aim yourself. We merged those concepts. We want to tweak it so it's just right, so if you want to make a headshot, you have to really aim..."

The mix of old-school and modern will manifest in other ways, including BJ's weapon selection. Blazkowicz can dual-wield massive shotguns or machine guns, as well as fantastical weapons like an energy cannon called the Lazerkraftwerk — a powerful beam weapon that can slice through metal doors and grates; a puzzle-solving tool.

"We're huge fanboys. id Software is what brought us into making games."

In a roughly 20-minute demo of Wolftenstein: The New Order, set about one-third of the way into the game, we had the chance to take control of BJ Blazkowicz as he invaded a Nazi stronghold and laid waste to scores of Nazi infantry. There's a mix of exploration, puzzle-solving and tactical combat that felt decidedly old-school and faithful to id Software games of yore. The AI-controlled Nazis of The New Order certainly feel smarter and more challenging than those of classic Wolfenstein games. They'll flank you and change tactics as you battle them, seeming less like bullet fodder than formidable foes.

There's an over-the-top quality to BJ's arsenal, his gruff action hero language and his ability to dispatch dozens of Nazi übersoldiers and their robot allies. MachineGames is not aiming for realism, Matthies says, preferring to skirt on the edge of believability.

"We want to take people and put them in this weird strange world where you have Nazi robots, insane weapons and over-the-top action and combine that with the domestic," he says. "So we have these really intimate relationships, and we have the day to day of being a person in this world and in that sweet spot is where we like to live. For us it's not about 'Does that really make sense that you can dual-wield auto-shotguns?' It's about the emotional moment that you have when you pull those [guns] up and see them for the first time, the feelings that invokes."

Those feelings of wonder and nostalgia seem genuinely important to MachineGames. Matthies says the original Wolfenstein 3D and the ability to explore a game world from the first-person was "a revelation that made me want to be a game developer."

"I remember for me it was like the first mind-blowing experience I had with a video game," he said. "So we've always loved it and for us it was a huge honor to work with it and for id Software to give us permission to do our thing. The amount of freedom they've given us with this game, the level of love we feel for this project, if it was our own IP or an existing IP, it doesn't matter. We love it so much.

Wolfenstein: The New Order will be published by Bethesda Softworks later this year on Windows PC, PlayStation 3, Xbox 360, PlayStation 4 and Xbox One.

Tracey Lien contributed to this report.