Kixeye makes it move to mobile this fall with Backyard Monsters: Unleashed

Share All sharing options for: Kixeye makes it move to mobile this fall with Backyard Monsters: Unleashed

Browser-based social game developer Kixeye will venture into mobile territory this fall with the release of Backyard Monsters: Unleashed on mobile devices.

Backyard Monsters is a tower defense game that is currently one of the most popular real-time strategy titles on Facebook, attracting millions of monthly players. Speaking to Polygon, Kixeye's chief marketing officer, Brandon Barber said that the studio plans to expand into the mobile space by first bringing over Backyard Monsters, then War Commander and eventually brand new IP that could potentially have cross-platform persistence. He said it's taken Kixeye this long to develop for mobile because the studio wanted to focus on its strengths before developing for other platforms.

"For us, browser was working really well and still is, and we're one of the few developers on Facebook that can manage their business model in a positive way," he said. "One of the biggest mistakes start-ups make is they lose their focus, so we felt like fighting a war on many fronts was not the best idea and that we should really focus on what was working.

"For the purpose of focus, we've stayed away from mobile, although we've always been fans of mobile. So we started thinking of ways we could bring Kixeye games to mobile without diluting everything to the point of being super flavorless and not consistent with our brand."

The studio brought on Caryl Shaw to be the executive producer of Backyard Monsters: Unleashed for mobile. Shaw had previously worked on mobile titles at ngmoco and was at Maxis before that. Her role is to ensure that all the strategy and design of Backyard Monsters is brought over to mobile platforms so that the game is appropriate for those platforms without losing the experience that Barber says "really satisfies RTS and RPG players."

"What we wanted to simplify was the user experience. What we didn't want to simplify was the gameplay. That's what we've tried to do with Backyard Monsters," Shaw told Polygon. "We're not trying to dumb down our gameplay. We're absolutely trying to make the experience one that is fun, really accessible to people, and the things we've changed have mostly been with an eye toward making shorter gaming sessions."

In a demo fo the game that Polygon played, we were shown that all the strategic elements from the browser version of the game remained intact — the user interface was the main thing that was different. In Backyard Monsters: Unleashed, players build fortresses in their backyards and guard it with walls, lasers, traps and other reinforcements to keep enemies out. At the same time, they build structures that will help them create an army of monsters that they can take out to battle and conquer other people's backyards. 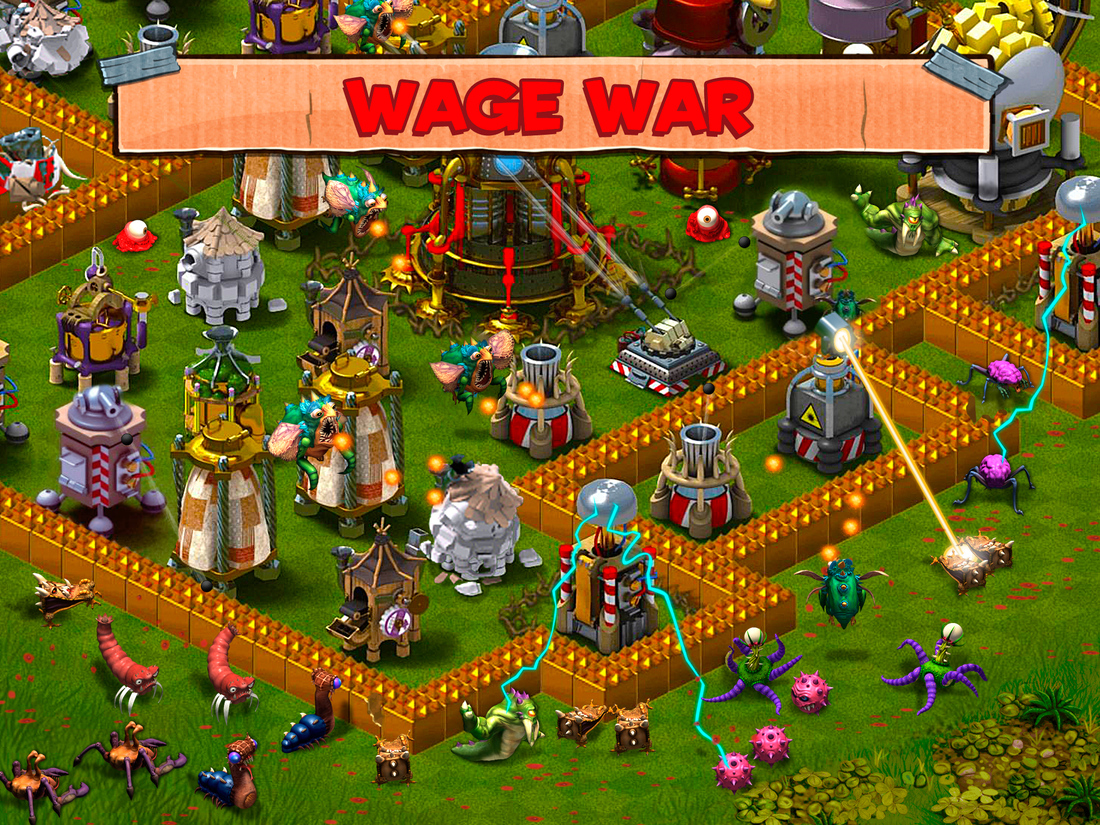 Where the browser-based version of the game requires players to use the mouse to fling their monsters into other people's backyards, the iPad verison we played allowed players to tap on the screen where they wanted to drop their monsters. Building objects is as easy as tapping on an icon and tapping a location to build. Players can also swipe between enemy backyards to preview battlegrounds.

According to Shaw, the game remains strategic because the monsters all have different abilities that can be used in different ways. In one playthrough, we deployed all our monsters at the same time to the same place, but they were immediately wiped out by enemy lasers. In a second playthrough, we distracted the lasers with our lightweight infantry monsters and sent stronger monsters around the back to take down the enemy wall before releasing more infantry soldiers to swarm the fortress.

As a tower defense game, players will also have to defend their own backyard and, if they get attacked, they can watch replays of battles to identify their weak points, and then seek revenge if they so wish.

Backyard Monsters: Unleashed will release on mobile devices this fall.