Doodle Jump for Kinect preserves the original's addictiveness, is a bit harder on the knees

Share All sharing options for: Doodle Jump for Kinect preserves the original's addictiveness, is a bit harder on the knees

Doodle Jump for Kinect brings the same rhythmic bouncing and shooting from its mobile predecessor to its upcoming big screen counterpart — although this time players may be feeling it a little more in their legs.

Lima Sky will bring its cutesy platformer to the Xbox 360 with the help of Kinect Adventures developer Smoking Gun Interactive early this summer for $5 (400 Microsoft Points). The game utilizes the Kinect's motion controls, swapping out tilting your smartphone and tapping the screen and adding a little more foot-shuffling and arm-flailing. The game's visual design is completely new — no environments or levels have been reused from the mobile version.

"When we first saw Kinect, we instantly felt that Doodle Jump was a natural for the platform, as it enables us to introduce great new gesture-controlled features and create an engaging experience that brings the whole family together," COO of Lima Sky Matt Turetzky told Polygon. "We were fans of Kinect Adventures, so we reached out to Smoking Gun Interactive, who had worked on it. When we sat down with the team there, we knew right away that they were the right development partners, as they brought some great ideas that showed they really understood Doodle Jump and why it's been popular for so long."

The titular Doodler will constantly jump on his own, while players step sideways to maneuver him up a vertical path of floating platforms. Each level has several checkpoints on the way up, and if you fall off or miss a platform your Doodler will be sent back to the last checkpoint.

Despite the prominent jumping mechanic, Turetzky said there was no way they were going to make players continuously jump.

"We experimented with different control schemes and felt that constant jumping was simply too exhausting," he said. "The game is addictive, so we didn't want people to stop playing simply because it is too much exercise. The game does require a good amount of movement, but it is certainly not a workout." 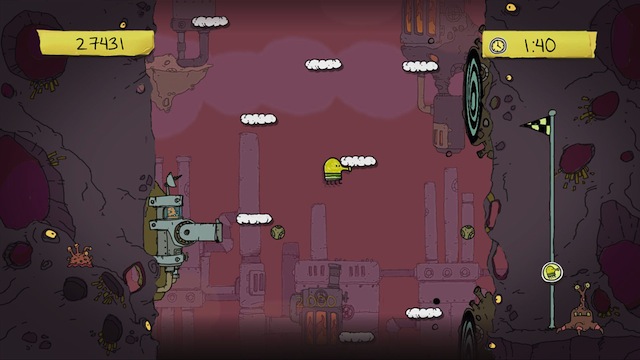 In later levels, some of the static green platforms are replaced with crumbling wooden boards that snap on contact or white puffy clouds that disappear after being jumped on once. Floating enemies will continuously crop up, and players can take down these enemies by waving their arm in the direction they want Doodler to shoot.

Players can hop through three different worlds — a cave system, floating islands in the sky and a creepier environment reminiscent of the underworld — each of which include ten different levels. The final level of each world is a boss battle in which Doodler must jump on his enemy's head four times to destroy him, all the while dodging obstacles like smaller floating critters and chainsaw blades. 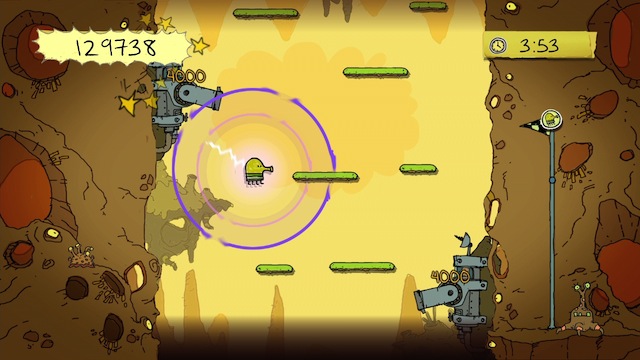 Of course, Doodler isn't left totally to his own devices. Players can collect power ups along their ascent, such as bombs that will explode when you clap and a pair of wings that allows you to rocket up a level faster by flapping your arms. Other power ups include coiled springs that give you a temporary increase in your jump and armor that protects you from baddies.

Stepping side to side repeatedly to move Doodler up each level felt simple but still a challenge; players who naturally tend to lean with their controller when turning or moving in games will find Doodle Jump for Kinect a comfortable fit. The challenge kicks in when the platforms become more spaced out and more enemies approach, and you have to quickly dodge an incoming spike ball with your whole body, or quickly squeak between two enemies up a series of very tiny clouds.

Turetzky said bringing the game to Xbox 360 feels like a natural fit due to the Kinect's motion controls.

"A key element of the original Doodle Jump is the motion control," he said. "Kinect offers us a chance to expand on that original vision with even more gestures to control new power-ups and game interactions. We found it to be fantastic as a party game, because people can look silly playing it. Oh, and the art style of Doodle Jump looks fantastic on a big HD screen."

Doodle Jump for Kinect is also being touted as a party title, and while there is no multiplayer mode, watching your fellow players shuffle around flailing their arms is entertaining — not to mention the tenseness of watching their Doodler eek up a narrow flight of platforms.

"More than anything," Turetzky said, "it's the shared experience that really sets Doodle Jump for Kinect apart from its mobile and tablet cousins."