The search for David "Knuckles Dawson" Dreger, the former contributor to Rooster Teeth who went missing last weekend, is still on and will likely move from land to water this weekend, according to the Facebook group for the search.

Dreger, 28, was last seen near midnight on the night of Sunday, May 26, in his hometown of Vancouver. His bike and helmet were found the next day in Stanley Park, and in addition to closing his Twitter and Xbox Live accounts, Dreger reportedly left his wallet, computer and phone at home.

Family and friends of Dreger, as well as the Vancouver Police Department's Missing Persons Unit, have been coordinating searches for him all week long. A spokesperson for the Vancouver Police Department told Polygon earlier today that there were "no additional details" at the time. Another search party will go out this afternoon in the Rocky Point area of Port Moody, a Vancouver suburb, starting at 7:45 p.m. ET.

According to David Dreger's sister, Danielle Dreger, search and rescue personnel have advised the family that the next step is to begin searching by sea. The family is currently looking into organizing boats for searches this weekend, said Danielle Dreger in an update posted to the Facebook group at 4:21 p.m. ET today.

You can see the latest missing poster for David Dreger below. Anybody with information on his whereabouts is encouraged to call (800) 222-TIPS. Interested parties can follow the ongoing search on the Facebook group, as well as on Twitter with the hashtag #FindKnuckles. 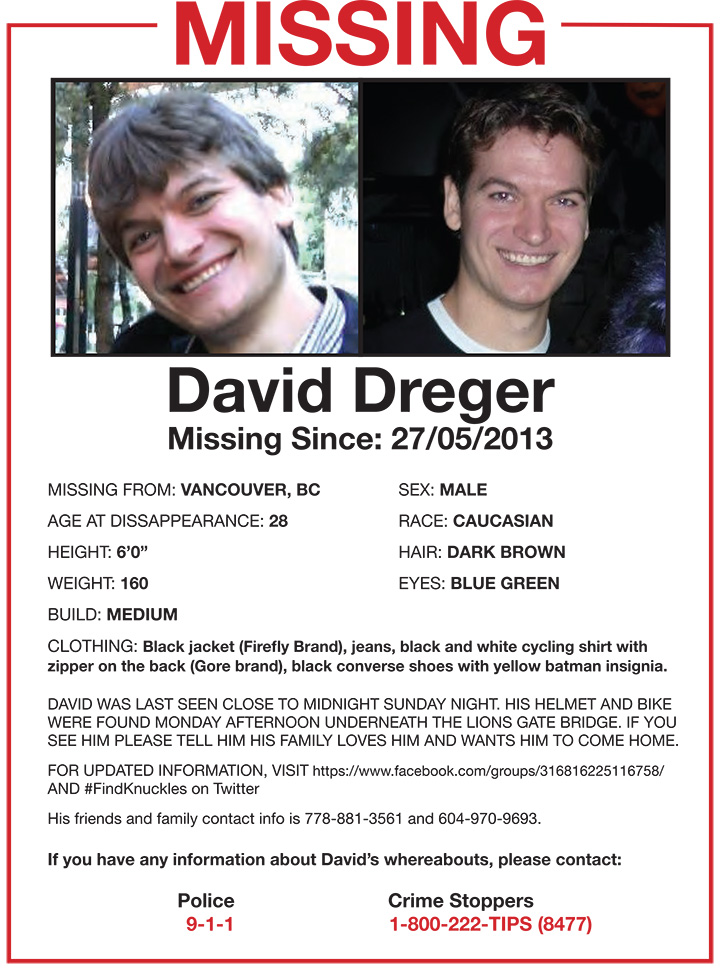