Share All sharing options for: Tubs of blood, no computer effects and The Evil Within's gruesome live action trailer

When Tango Gameworks, the studio founded by Resident Evil creator Shinji Mikami, and Bethesda Softworks set out to create a teaser for their horror game The Evil Within, they turned to a company called Prologue and director Kyle Cooper. You may not immediately know their names, but you know their work.

Venice, Calif.-based Prologue, the creative agency founded by Cooper in 2003, is responsible for the title sequences of dozen of films (Iron Man, Argo, X-Men First Class) and television shows (The Walking Dead, American Horror Story), as well as a handful of video games, including Konami's Metal Gear Solid series. Cooper directed the title sequences for Metal Gear Solid 2: Sons of Liberty while at Imaginary Forces and David Fincher's serial killer movie Se7en, perhaps his most groundbreaking, most recognized work.

It was Se7en and American Horror Story that came up in initial conversations between Bethesda, Tango and Prologue, the teaser film's creators tell Polygon. Bethesda wanted "something dark," Cooper said, and tapped Prologue to create "a conversation point."

The result was a two-minute live-action teaser drenched in mystery and blood. It was a tone-setter, not unlike the first gameplay-free peeks that Bethesda gave of The Elder Scrolls 5: Skyrim and Human Head's Prey 2. 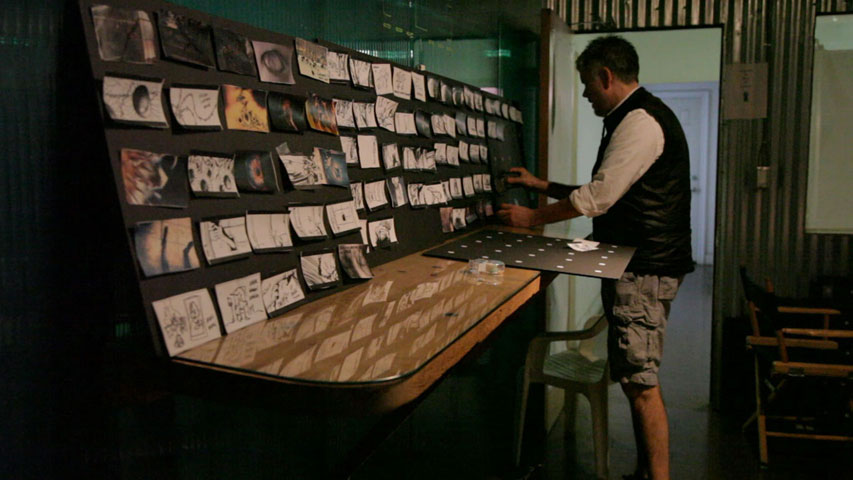 Pete Hines, vice president of PR and marketing at Bethesda Softworks, said the promotional teaser was designed not for the video game's title sequence, but as "something that gets players in the right mindset as they think about The Evil Within and the kind of game Shinji and his team are making."

Prologue started with a few key visuals: a man sitting at a table, creating traps made of barbed wire; a woman in an iron lung; an asylum with an attached lighthouse; and old scientific photographs. Prologue amassed sources of design inspiration, compiling books that might have one image out of 40 that resonated with The Evil Within's developer and publisher.

"It was a fairly organic, cooperative process," Dervin said. There may be one frame of a shot Bethesda and Tango loved, Dervin explained, asking Prologue to highlight certain visuals or a particular color palette. The two creative teams went back and forth, ensuring that the teaser was up to the standards of and ultimately signed off by Mikami.

As the sequence progressed, Bethesda and Tango began to share artwork from the game, revealing characters like the bloody spiderwoman, one of The Evil Within's so-called Reborn seen in the teaser, and man with hundreds of glass shards embedded in his flesh. 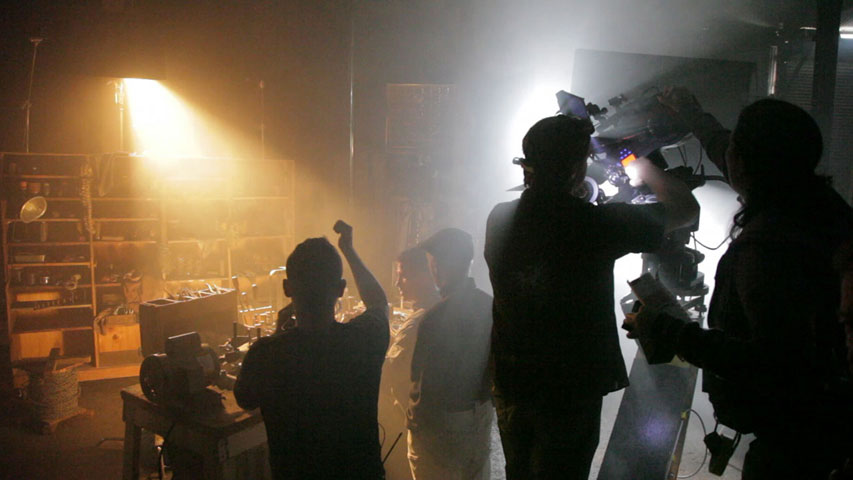 Dervin called the choice to film live-action "a philosophical decision." Cooper said that, despite actor discomfort, shooting practical effects instead of CG helped "some of the anger" come out in the process.

"I like that if I do it, maybe it's not the same as everybody else would approach it," he said. "I find that in some of these things — American Horror Story, Final Destination and Se7en — you have these conditions for live-action experimentation. I can keep my hand in it [when] I'm shooting things. I can be a little bit improvisational and a little bit expressive. You can embrace some improvisation because its happening simultaneously. Some of the anger and things can come out in the process.

"We wanted to use live-action to set a mood for the game that we weren't sure we could execute in the same way with gameplay or CG," Hines said. "But the trickier part was how to do live action and have it look right and not come off cheesy."

According to Hines, Mikami "seemed happy and excited for the way it all came together." Cooper, too, seemed pleased with the outcome. "They still let me do what I do," he said, "but [Bethesda] was very involved."

"I find that some of the video game products, like Metal Gear, fascinating to me," Cooper said, adding that he's not much of a player of video games. "The way that Kojima's mind works is fascinating."

It was a slightly more subtle hint than when Cooper and a friend wore Moby Dick Studios t-shirts to the VGAs and Konami's after party, all but confirming The Phantom Pain's ties to Metal Gear.

Expect to see more of Cooper and Prologue's work in games in the coming months, Cooper teased.

"In a couple of months, there's some cool shit happening," Cooper said. "We're doing a lot more video game things and there's some pretty interesting projects that are pretty hardcore.

"It's a really good time at Prologue."