In most video games, players are entrusted with performing actions: run, jump, shoot, swing, slash, crouch and curb-stomp. The developer sets the scene, establishes the context and the player is released into the world with an arsenal of actions. In Loveshack Entertainment's Framed, things work the other way around.

Framed is a narrative-based panel shifting game where players rearrange a series of panels to help tell a story. Set on a screen that resembles a comic book page, players push around blocks of minimalist animated paintings. Each panel is saturated in muted pastels, environments and surfaces are given a textured, painterly quality where colors are added in broad strokes, and as the game's character leaps from panel to panel, it feels like he's a character trapped inside a comic book.

Developers Joshua Boggs, Adrian Moore and Ollie Browne originally worked at Firemint, an Australian studio best known for its work on Flight Control, Spy Mouse and Real Racing. The trio left Firemint shortly after the independent mobile studio was acquired by Electronic Arts. Within months, they founded Loveshack Entertainment in an effort to get back to their independent roots. They wanted to work in a small team, they wanted to be accountable for their actions and, most importantly, they wanted to make the game that had been fighting its way out of their collective heads — a game Boggs describes as something unlike anything out there right now.

"So I had this idea," Joshua Boggs tells Polygon, "I thought, what if there was a guy who was trapped in someone else's work of fiction? What would that look like as a game?"

Boggs played around with how he could communicate his idea. Initially he thought of making a game that was entirely narrated — as the player performed actions, text would appear on the screen to complement what was happening. But before Boggs could even get started, he was beaten to it by games like The Stanley Parable and Bastion — games that did in-game narration with a panache that Boggs wasn't sure he could match.

The idea continued to stew in his head. For a long time it went nowhere because unless he could do it in an original and interesting way, he didn't see a point in doing it at all. That was came to him on a flight.

"What happened was I bought Scott McCloud's Understanding Comics and I was reading it on the plane and, all of a sudden, you when know the penny drops? It was that moments," he says. "All of a sudden this idea I had years and years ago just finally dropped and it was like, oh my god. I was frantically writing it down."

The chapter that lit the spark in Bogg's brain was a section devoted to comic book gutters.

"So in comics, you have gutters, which is the white space between panels," he says. "And the thing I found interesting about it is it creates a space where people can put their own imagination in it, like filling in the gaps. I really thinks that's what makes good stories interesting.

"What makes good games interesting is when you don't cram too much in, but when you take out just enough so there's this hole where people can imagine what things will be like. It just instills a sense of wonder."

The development team didn't intend for the game to take on the form of comic book panels, but Boggs says it came naturally to them and, the more they thought about it, the more it made sense to use the panels as a game mechanic.

Early prototypes of the game were done on paper, with each panel cut out so they could be arranged and rearranged. Boggs says the story of a man being trapped in a fiction changed to that of a man existing in a world where he has been framed and, in an almost god-like fashion, players determine the meaning of his actions and their consequences by rearrange the panels to change the story's context.

In the same level, when two panels are switched around, it tells a completely different story. Instead of climbing down the ladder and being axed, the man takes a different path, picks up the axe, attacks the former axe-wielder at the bottom of the stairs, and climbs up the ladder, where he then uses the axe to smash open a boarded-up door. 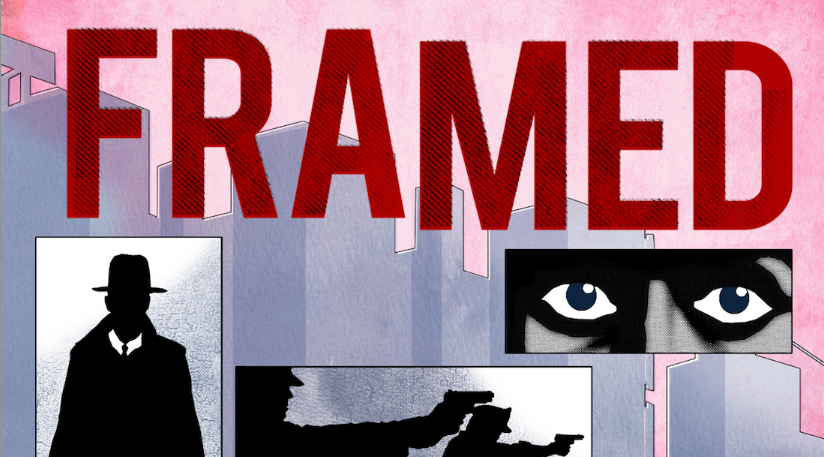 "It's approaching interactive narrative in a different way," Boggs says. "So instead of the actions changing, you're changing the context of what happens. I really believe in there being a narrative in any scene. The meaning behind any kind of scene is from the action and the context."

Boggs says he drew inspiration from flash fiction, which is a way of telling a story in only one sentence. He uses an example commonly attributed to Ernest Hemingway, which reads, "For sale: baby shoes, never worn." According to Boggs, the collection of those six words tells a story and, despite its lack of detail, readers don't hesitate to fill in the gaps themselves — they create their own backstory and, depending on their imagination, the meaning of the sentence could differ wildly from person to person. Framed is trying to achieve something similar. Boggs explains that where most games are full of actions, the developers of have preset the actions, and it is up to players to change the context. Every panel tells its own little story, and as the character momentarily disappears into the gutter between panels, players are left to use their imagination to find meaning in the actions they're seeing.

"There will be one ending," Boggs says. "People can interpret it in different ways because of the changing context."

Loveshack Entertainment is facing no shortage of challenges in making Framed. According to Boggs, the game's level design is "really hard" because, as linear as the levels may look, the developers have to account for what the player will do from scene to scene. Every level is designed on bits of paper, cut out, stuck to a board, and iterated and tweaked until the story makes logical sense and the panels flow from one to another.

The game is months away from launching and the Loveshack Trio currently have their heads down developing levels for Framed. When the game was shown at the Game Developers Conference this year, it was positively received. Boggs hopes its future players will respond the same.

"I really hope that when people play it, they sort of look at it as an example of how we don't have to make a narrative fully interactive," he says. "I think narrative is one of those things where you want to restrain people, but players want freedom, so you have to do it in a really subtle way and make them feel like they're making massive changes.

"I guess what I'd hope when people play it, they'll say, 'This is it. They've nailed interactive storytelling.' We've been trying to do it for so long, so we hope that's the takeaway."