Share All sharing options for: Hohokum and Doki-Doki Universe coming to PS3, PS4 and PS Vita

Hohokum, due sometime in 2014, is the creation of artist Richard Hogg and developer Honeyslug, the team that co-created PS Vita game Frobisher Says! In a post on the PlayStation Blog, Hogg writes that the game is a Sony Santa Monica project and describes the game thusly.

"It is a whimsical colorful game with an emphasis on playful exploration and creativity," Hogg writes. "You take on the role of a curious flying snake-like character. A technicolor, calligraphic, worm-like, kite-like being! The way you move around the world is very expressive and kinetic and kind of mesmerizing to play."

Hogg says one of the main goals for Hohokum was to "create something where the usual pressures of videogames — constantly being told to do things, fearing failure and being challenged to earn progress — were all absent." The game will have "goals and secrets to discover," he says, but that the game is a playground to wander about and lose yourself in. 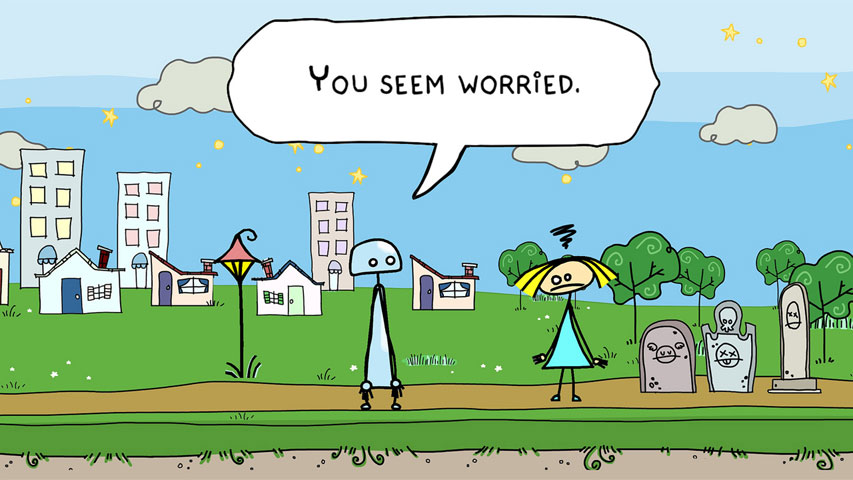 Doki-Doki Universe is the other independent game coming to three active PlayStation platforms, this one from developer HumaNature Studios.

HumaNature founder Greg Johnson describes Doki-Doki Universe as a series of products, with the first being a free downloadable app that lets players fly around a universe and take personality quizzes.

"This free game will include our fun Doki-Doki Mail messaging app, which players will also be able to get for free on mobile platforms, for cross-platform chat," Johnson writes. "If players decide they want to land on planets and interact with all the crazy characters in our Universe, they can purchase and download the full game, which you might call an ‘RPG/Simulation/Interactive Story' game."

Johnson says Doki-Doki Universe is ambitious and difficult to describe.

"Doki-Doki is a lot more than just a game," he writes. "It's a huge simulated 'living' Universe of intriguing content, filled with interactive stories and self-discovery. From within Doki-Doki players can use Doki-Doki Mail that ‘magically' animates anything you type, and lets you communicate in playfully expressive ways with friends who also have the game or the mobile app."

More information on both titles is available at the PlayStation Blog.

Six years on, No Man’s Sky is still reaching for the stars

Every new movie and show coming to Disney Plus in October

Every movie and show coming to Netflix in October