Mario and Donkey Kong: Minis on the Move tweaks and twists the puzzle-action formula.

Mario and Donkey Kong: Minis on The Move more than lives up to its pedigree.

It's a brilliant twist on the Mario vs. Donkey Kong line, a puzzle-platformer spinoff series that's marched steadily towards the former end of that spectrum since it started in 2004. Eschewing both the "vs." and the platformer elements of previous titles, Minis on the Move offers tighter action and a top-down perspective.

But Minis on the Move's real brilliance lies in its willingness to tweak its own formula. It keeps things interesting and challenging across more than 180 stages, with four main game types that all offer a fresh take on Mario vs. Donkey Kong's basic structure, building on those core mechanics.

Recent Mario vs. Donkey Kong games have centered on guiding the titular minis (tiny wind-up toy versions of popular Mario Bros. characters) through increasingly crazy obstacle courses. You never control these characters directly, instead manipulating the environment around them to lead them to victory. This is still the case in Minis on the Move — only this time, you're actively building and changing the stage around them.

In each level, your mini emerges from a warp pipe and follows a path, and it's your job to place tiles that create a clear route to the goal. Plenty of obstacles stand in your way in any given stage, including spiked pits, enemy shy guys and frequent free falls. Some levels require you to grab a key before the goal opens, and each has three deviously placed "M" coins. If you manage to nab all three in a stage, you're awarded a star, which is used to unlock modes, minigames and features. 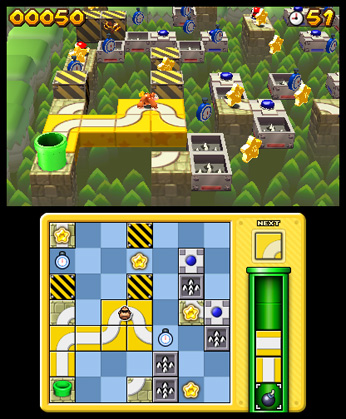 Minis on the Move features four main puzzle modes, all with their own twist on the basic format. It wisely eases players into the action, as new gametypes unlock as you go, but only Mario's mode is available at the beginning. "Mario's Main Event" requires you to juggle a queue of placeable tiles — if you don't work fast enough, these will stack up like a clogged Tetris screen and you'll fail the stage. As you unlock more characters, you can use them in the other games, like "Many Mini Mayhem," which lays out all of the tiles in the stage beforehand but makes you manage several minis, each of which starts off walking in different directions, and often in different locations. "Puzzle Palace" is calmer, giving you a set selection of tiles and tasking you with plotting out the perfect path — though you can't change placement once your mini starts running through the course. Finally, "Giant Jungle" offers the stiffest challenge: a bigger, harder take on Mario's Main Event with massive boards and the added difficulty of collecting stars along the way.

Minis on the Move works across the board because its core mechanics are constantly, cleverly iterated upon

The game frequently adds new elements that build logically upon existing features. Once you get the hang of, say, spring blocks that bounce you over one tile space, you'll be introduced to new Donkey Kong tiles that flip you two spaces in the air. After you've mastered the loop feature — which allows you to earn more time and reach certain coins — you'll start playing with figure eights. Minis on the Move grows its challenge without hitting you over the head with it.

That challenge does grow — later stages in every mode are chaotic, requiring fast reflexes as well as a strong grasp of the level's architecture. You need to think quickly and improvise, especially while managing multiple characters. But Minis on the Move's levels are so brilliantly designed that even failed attempts at clearing a stage always yielded new clues and new strategies. I rarely felt stumped by a level, and when I did, I found that playing around in other modes allowed me to come back with a fresh perspective and the winning moves.

Accompanying the main event modes is a collection of action-oriented minigames. These work well as palette cleansers — and stress relievers — allowing you to fling minis at floating targets, for example, or to hurl your little guys at block structures to bring them down. Another mode, "Elevation Station", has you hoist and lower a platform as quickly as possible to grab coins and avoid bullet bills flying across the sky. All are light, twitchy exercises, well suited for breaks if your brain starts to hurt from the main game.

An intuitive level editor rounds out Minis on the Move's feature set, which allows you to create and share stages with other players. Minis on the Move's relatively simple mechanics and boxy-by default stages make excellent training grounds for would-be puzzle engineers. I found that messing around creating death traps for minis actually inspired new strategies for beating tougher stages in the main game. 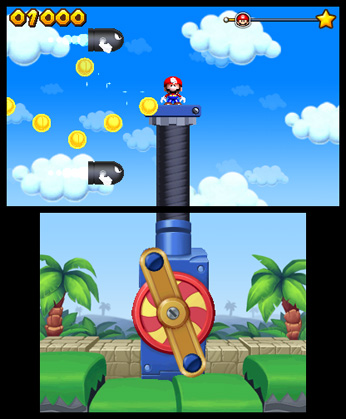 Mario and Donkey Kong: Minis on the Move stays fresh and inventive throughout.

From the moment I picked up Minis on the Move, I fell into a zone, alternating between master tile strategist and rapid-fire course builder. The challenge level is spot-on and the individual stages are cleverly built. These are the hallmarks of great puzzle game design, and Minis on the Move demonstrates them handily.