Share All sharing options for: The Crew is Ubisoft's social racing gambit

The Crew is Ubisoft's big attempt to make a significant dent in Need For Speed's dominance in arcade-action racing.

New consoles offer an opportunity to innovate, and The Crew embraces all the promise of Xbox One and PlayStation 4, most particularly social and co-operative play. The game is being developed by Lyon-based Ivory Tower, staffed with former alumni of Eden Games (Test Drive) with the help of Ubisoft Reflections (Driver: San Francisco).

Creative director Julian Gerighty told Polygon, "The entire game has been assigned with social, group and co-operative play in mind. Where Xbox 360 and PlayStation 3 brought us HD graphics, this generation brings a greater focus on community and social features."

The Crew offers up a 20-hour campaign that allows players to engage in missions alone, with friends or with random co-op players. Upgrades and geographic unlocks are awarded along the way. In multiplayer, players can create their own crew to compete against other teams in races, take-downs and other challenges.

Gerighty described the game as "definitely an RPG" with an emphasis on MMO-style human interactions. "You might be racing against an AI, or it might be another person," he said.

The Crew's tagline is 'Never Drive Alone'. In a multiplayer demo, Gerighty said, "There is no lobby here, no separation of the online multiplayer and the single-player experience. This living world full of potential rivals and friends is our conception of next-gen." Players can also modify their cars using tablet devices.

Comparisons with Need For Speed: Rivals are inevitable. Whether Ubisoft can match EA's Frostbite 3-driven visual fidelity remains to be seen, but both games lean towards anarchic, tire-squealing cop-chases and gleaming bodywork show-off individualism, as well as the drop-in, drop-out multiplayer buddy-connectivity most often associated with first-person shooters. The Crew takes its lead from Grand Theft Auto-style road-awareness, in which pedestrians exist to festoon the mayhem. 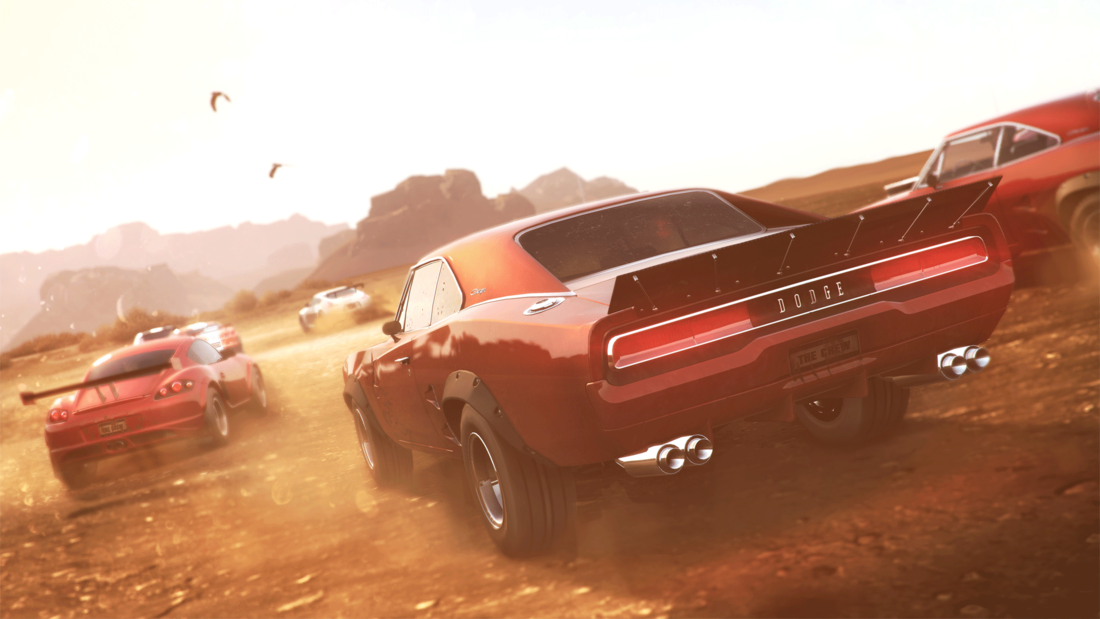 At E3, Ubisoft showed maps in New York, Las Vegas, Miami and a largely off-road arena in the Black Hills. The game includes an opportunity to drive anyway where in an idealized, shrunken version of the contiguous United States. Gerighty said New York is "about the size of Liberty City" and that it would take about an hour-and-a-half to drive from New York to Los Angeles, with vaguely appropriate geography along the way.

The Crew is scheduled to launch in early 2014 for Xbox One, PlayStation 4 and PC.