Dark Souls 2 has a new director and a new engine, but the soul of From Software's series of dark, challenging role-playing games appears to be intact in Dark Souls 2, even if slipping into its body feels a bit different.

Some of the game's changes, including its new graphics engine, took a bit of time to get used to in a recent hands-on demo. The control of characters felt noticeably different, speedier perhaps, and without the weight of characters in Dark Souls. We had no way to see what our characters stats were, nor the weight of the equipment they carried, so it's difficult to judge how character's will ultimately feel.

And Dark Souls 2 won't ship for consoles and PC until March 2014, so the game has time to gel and be polished. But the extra time From Software has to perfect the game is comforting.

From Software's E3 demo for Dark Souls 2 features two pre-built characters: a Warrior, based on the character seen in the game's debut trailer, who was armed with a shield, short straight sword and a gleaming greatsword; and a Sorcerer, equipped with a short sword and a tall catalyst for spellcasting. (Another two were locked in the version we played.)

The Sorcerer had a range of offensive spells and pyromancies at his disposal, including a soul arrow-like magic attack and another that rained down a volley of soul arrow attacks. He could toss fireballs and emit a sweeping wisp of flame, which arced out at a very specific distance. The Sorcerer also had a unique shield that looked like it was collection of runes made of wrought iron.

That Sorcerer shield stood out as one of the examples of brilliant visual design that separates From's take on dark medieval fantasy from its peers. Seeing this unusual, ineffective-looking shield was strangely exciting. It immediately conveys information about its weaknesses and possible strengths, and I cursed From Software for not letting us dig into the game's menus to see what this runic shield could do.

Dark Souls 2's E3 demo takes place inside and among the exterior of a crumbling, medieval structure; not quite a castle or fortified, but a broken fortress that looked largely abandoned. Its inhabitants included low level dreglings, a type of undead creature armed with sword and shield or bow and arrow, and heavily armored creatures with bulky tortoise shell armor. Those bulky shelled enemies wielded heavy maces capable of smashing through walls and could crush a player with a backward fall if they attempted a backstab. 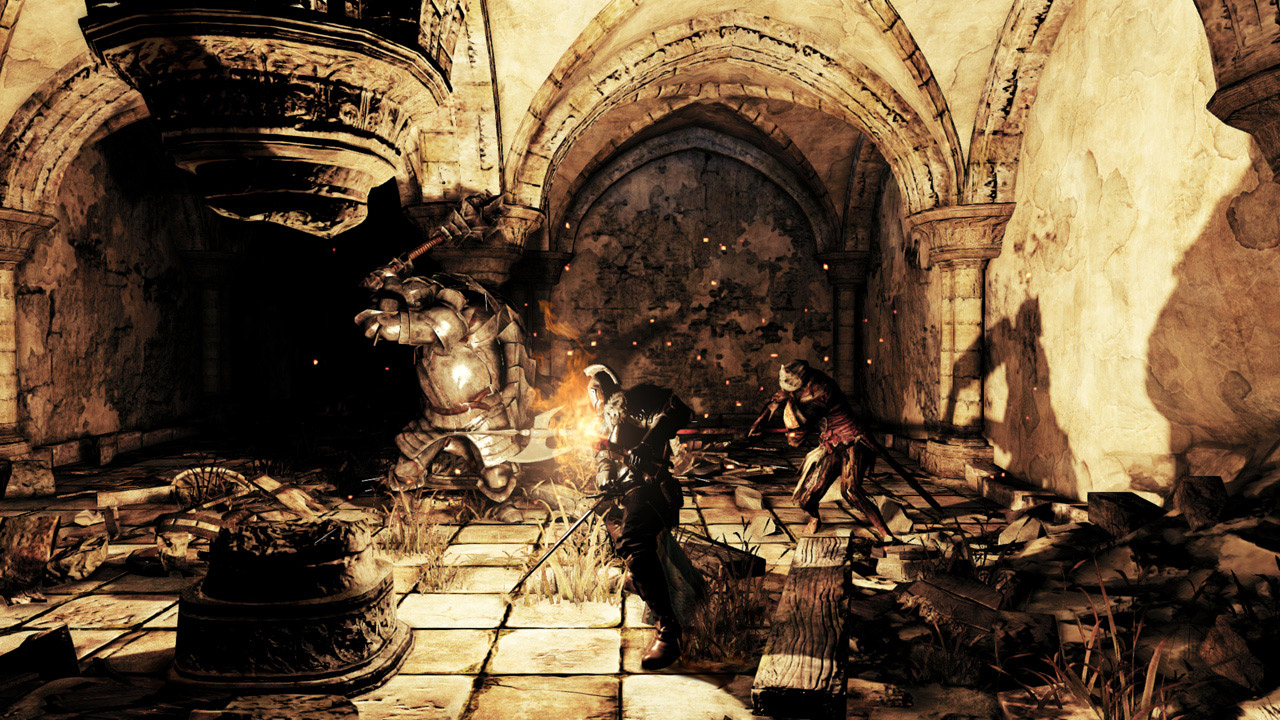 Backstabbing will make a return in Dark Souls 2, but in a slightly different form. In the case of the Warrior character, executing a backstab with his short sword performed a three-hit animation: a hilt bash followed by two slashes to the back. Rather than stabbing through the torso of an enemy, backstabs will results in attacks with weapon-specific flourishes.

According to a Namco rep, players may accidentally "whiff" a backstab if they're within range, but not at a distance close enough to execute. A short sword backstab attempt may miss on the first part of the three-part attack, we were told, leaving the backstabber open to an attack — something we weren't able to witness firsthand during a hands-on demo.

But the changes to backstabs appear to be a move from the developer to reduce players' reliance on backstabs, which are easy to execute, carry little risk and yield high damage in the first Dark Souls.

The differences between Dark Souls 2 and its predecessor appear to be less dramatic than that of the transition from Demon's Souls to Dark Souls. Players will be able to heal themselves in multiple ways in Dark Souls 2, through the returning Estus Flask and with "lifegems." Those healing items will come in standard lifegem and radiant lifegem and, based on the demo, seem to function like humanity in the original Dark Souls. They replenish hit points and can be used on-the-go for faster replenishment.

The Dark Souls 2 demo included a handful of other consumable items, including amber herbs and twilight herbs, though their functions remain mysterious.

The game also appears to feature the return of a Demon's Souls gameplay mechanic: Black Phantoms of run of the mill enemies — as opposed to named Black Phantoms, such as Maneater Mildred — can appear out of thin air. In one section of the demo, a trio of Black Phantoms materialized, tossing two dreglings and an armored tortoise knight at the player at once.

From Software isn't shying away from sending increasing numbers of enemies at players in Dark Souls 2. In one section, following a bonfire warp from the fortress to a castle interior, the game threw four horse-headed knights at us. Those knights, which at first appeared to be kneeling statues, sprang to life when my warrior got too close.

A goat skull-headed wizard in the distance lobbed magic missiles not far away, adding insult to injury. The knights, armed with pikes and a fierce kick, brutally assaulted my warrior, making short work of my character. It was only in a "god mode" demo that I was able to pass them, kill the wizard — less of a challenge at close range — and move onto the demo's boss fight.

(It turns out that those horse-headed statue knights can be dispatched much easier, simply by beheading them before they become animate. Pro tip.)

Fortunately, the pain of getting there was worth the wait, as Dark Souls 2 will include at least one boss battle that beautiful to behold and stunning in its design, but will likely be a maddening challenge. 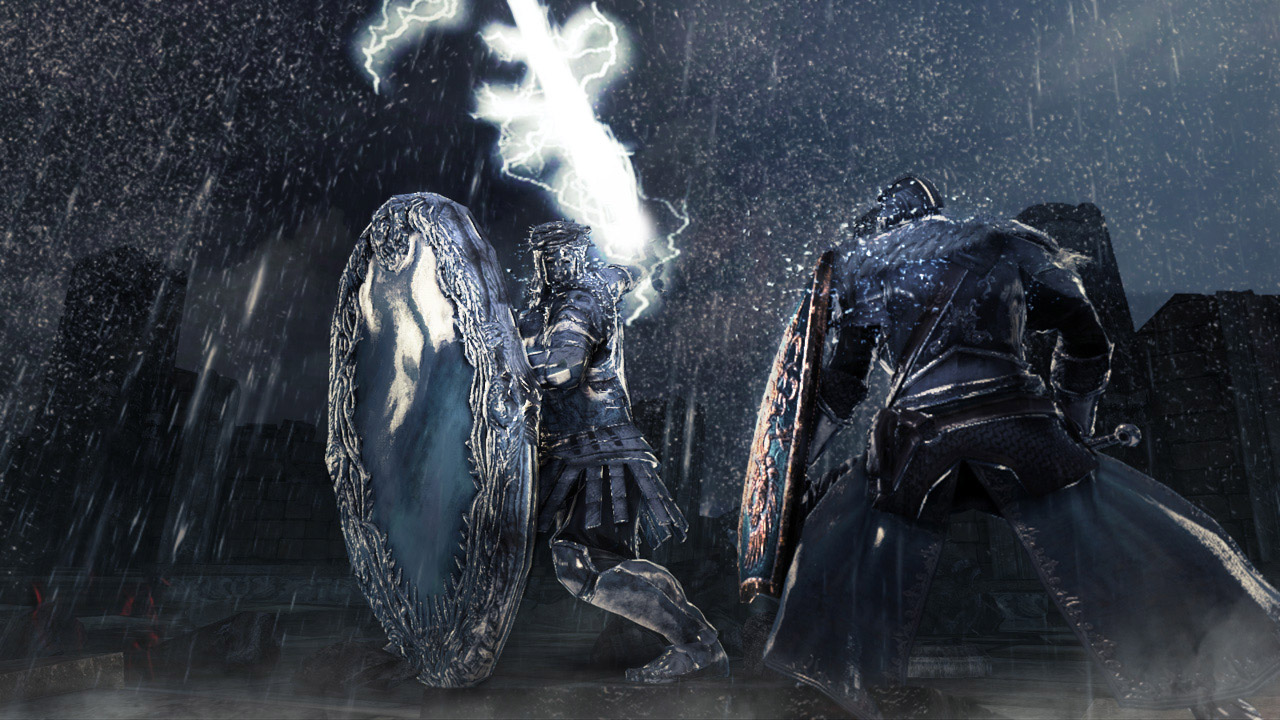 The demo's final battle was against an imposing enemy known as the Mirror Knight. Outfitted with reflective, chrome-like full body armor, the Mirror Knight fights in what appears to be a rooftop arena — or at least some environment exposed to the elements, as a dramatic rainstorm soaks the scene. The Mirror Knight takes advantage of that inclement weather to attack you, channeling bolts of lightning at the player.

But the Mirror Knight's most impressive and deadly attack comes from his shield, an ornately decorated mirror. He'll slam it to the ground, upright, leaving himself vulnerable to attack. But as he does that, an image of a smaller knight will appear inside the reflection of the mirror shield. That secondary knight will pound on the interior side of the shield, shattering through and breaking free, leaving the player with a second foe to fight.

Mirror Knight can summon a second ally through his shield and in the case of our encounter with the boss, called forth another knight with a different weapon. It's not clear just how many knights Mirror Knight can spawn or if their weapons are randomized. It is crystal clear, however, that Mirror Knight will be an immense challenge, even by Dark Souls standards.