Below from Capy Games is an ode to roguelikes, with 'brutal but fair' combat

Share All sharing options for: Below from Capy Games is an ode to roguelikes, with 'brutal but fair' combat

The creators of Super TIME Force and Superbrothers: Sword & Sworcery EP unveiled their next adventure, Below, at E3 2013. Below is a project that's been brewing for years and is now destined for Microsoft's Xbox One.

Below harkens back to "roguelikes of yore," its creators say, noting its use of intense challenge, permadeath and randomly generated environments.

Capy Games' journey into the next generation may share qualities with graphically simple, maddeningly tough roguelikes. It may also draw comparisons to the likes of tough-as-hell games Spelunky and Dark Souls. But Capy is careful about how it describes Below.

"It's not a roguelike," explains Capy's Nathan Vella, trying not to offend purists of the genre. "It's a roguelike-like."

"The game's really about exploration," Vella says. "You're a tiny warrior, exploring the depths of a remote island. The first goal is to explore it, but really the key part of exploration is surviving."

"You're small, and can die at any turn."

Survival comes from "brutal but fair combat," and not being reckless in your exploration of the island. You're never going go die as a result of a poorly implemented game system, Vella promises. Your skill with sword and shield — and paying attention to your environment — will translate to a long and happier life in Below.

"If you manage to survive, that's where the discovery component comes in," he says. "That's when you start unlocking the potential of the game, the story, the lore and also what you can within the game itself."

Vella calls Below a "super video game-y video game" whose strengths are its mechanics, its visual aesthetic and its soundtrack. The tiny warrior that players control is miniature in size to present a sense of scale. Tilt-shift photography effects offer more dramatic visual flair, reinforcing the diminutive size of the warrior versus his world, but also provides a point of focus for the player. 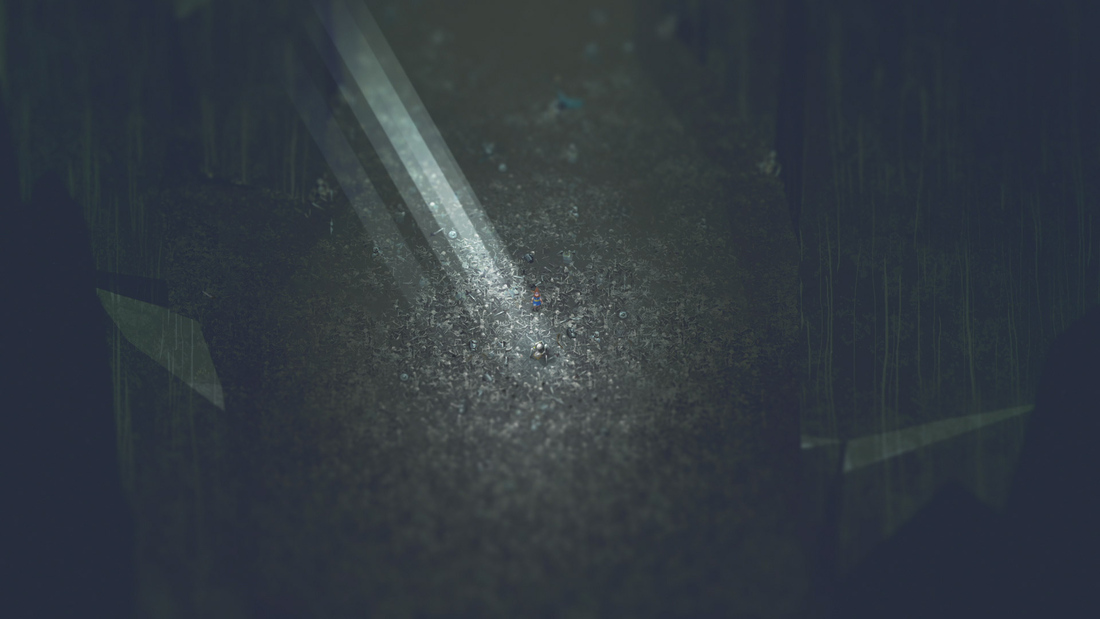 The game will feature a multiplayer component of some sort — Below's teaser trailer shows two warriors fighting together on a shared screen — and some sort of persistence. But Vella was unable to expand upon those concepts further, instead focusing on the "explore, survive, discover" philosophy of the game.

Below will be another collaboration between Capy and singer-songwriter Jim Guthrie, whose music was at the heart of Sword & Sworcery.

"We knew we wanted to work together on something, and this couldn't be a better fit," Vella says. "But we mostly wanted to do it because of how positive the collaboration had been previously. This was an opportunity for us to work with Jim in a different way. A lot of Sworcery was taking Jim's core and working upon that [with the game]. And in this case, it's our core and Jim building on it [with music]."

"The truth of it is: We fuckin' love the guy," Vella adds. "I want to work with my friends, and it helps when your friends are the most talented people you know."

There's still much more to be revealed about Below: how its multiplayer and persistence work and how it uses the Xbox One's hardware and software features. But it's clear this is a passion project, and that Capy has enthusiasm in ample supply.

"This is a concept that Kris Piotrowski [of Capy Games] has been very passionate about," Vella says. "We started talking about this idea years ago, pre-Demon's Souls. Games like Spelunky, Dark Souls, Demon's Souls, FTL: they've done a bit of legwork for us in helping to prove out the idea that people want brutal, hard games that don't hold your hand and have something happen differently every time you play it."

Nintendo is the latest target of Saudi Arabia’s gaming investment