Rocksteady set the scene for the Batman: Arkham series, but WB Montreal and Armature Studio are splitting responsibility on where it goes from here.

“Fans have a right to be skeptical.”

WB Montreal creative director Eric Holmes has just finished an interview with Polygon, but says he wished he had said that last sentence on camera. He's responding to the concerns that some fans have over whether Batman: Arkham Origins will be able to live up to the high bar set by two previous Arkham games from developer Rocksteady.

Holmes understands the source of those concerns, but he believes in his studio's approach: emulation. "We're trying to be true to it,” Holmes says. "We really respect what [Rocksteady is] doing. The worst thing you could do would be to come in and try to reinvent the wheel. We're trying to be true to why people love those previous games and add new things on top of it — not substitute or replace or ultimately reconstruct things that are solid. We want to find new ways to add."

On the other end of the spectrum is Mark Pacini, the game director for Armature Studio. Formed five years ago by veterans of Retro Studios, the creators of the Metroid Prime series, Armature has stayed out of the industry spotlight until now. Batman: Arkham Origins Blackgate, a Vita and 3DS spin-off of WB Montreal's game Batman: Arkham Origins, will be the first highly publicized release from Armature. The studio has a lot to prove.

If WB Montreal's approach is to attempt to recreate Rocksteady's magic, Armature is more interested in reimagining it. Both 2009's Batman: Arkham Asylum and 2011's Batman: Arkham City borrowed a lot of their structure from the Metroid Prime formula, which Armature's founders proved so adept at developing during their time with Retro. With Blackgate, they want to leverage that experience but also build something unique onto a familiar figure.

"We wanted to preserve the experience but make it different," Pacini says. "We needed to ensure that it feels different. It's an original game, so why should you play this game?"

To grind or not to grind

Origins and Blackgate oppose each other in more ways than just top-level design philosophy. One of the major additions to Origins that Holmes talks up is an expansion of the leveling system from the previous Arkham games. The wall of upgrades from previous games has been reshaped into an ability tree that allows players to choose upgrade paths that spec into certain strengths and weaknesses. Fighting well gains you more experience which allows you to purchase more upgrades. Holmes hopes that in a "city overrun with crime," the experience system will "drive players to grind."

Blackgate, on the other hand, has no experience or leveling system at all. Pacini specifically notes that he doesn't want players to worry about grinding. He prefers that they find upgrades naturally and allow that discovery to set the pace of the game. In fact, players can pick up new gadgets in any order by choosing which bosses they want to tackle.

"[Players] could possibly break the game in ways that we never even thought of," Pacini says. "You can have items that you aren't meant to have when fighting a certain boss that make it super easy if you figure it out." When Holmes talks about freedom in the console version of Arkham Origins, he clearly means something different. He says that players will have lots of choice because "there's always something new popping up, but they can follow that or stick to the core story."

It's not choice over how the game experience shapes up but a choice of which of Origins' myriad distractions to take in. 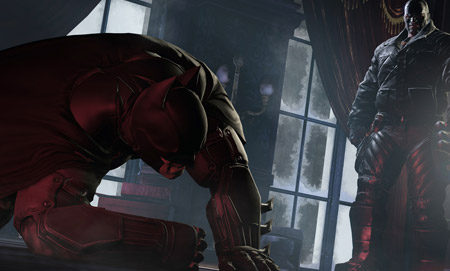 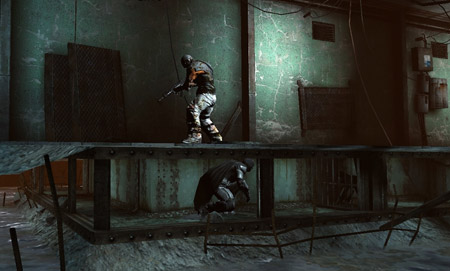 Batman: Arkham Origins takes place in a virtual Gotham City that WB Montreal has repeatedly bragged is two times bigger than that of Arkham City. It is, by definition, a game of "more." More landmass. More enemy types. More side missions. But when we say as much to Holmes, he is quick to back away from that notion.

"I don't know where you got that soundbite about adding more than it's ever had before," Holmes says. "Definitely we're contributing. We're adding to the game. Some things we're removing too."

As an example, Holmes notes that they've pared back some of the gadgets that were introduced in Arkham City. He suggests that the previous game might have had too many gadgets and that some weren't as immediately or evidently useful. "Some players went through the game without ever using some of the gadgets," he says.

And yet one of the key points of WB Montreal's E3 demo for Arkham Origins is the remote claw, a new gadget that allows Batman to attach objects or enemies to each other. Tie one enemy to another, and they fly together and knock each other out. Or you can tie an enemy to an explosive canister. Or to a gargoyle statue. The game will also require use of the remote claw to solve some traversal puzzles.

It's a handy tool, no doubt, but is it actually any different from the one thing Holmes concedes that they're cutting back on? He says the WB Montreal team is planning encounters that are tied to specific gadgets to teach players and encourage their use.

In the end, Holmes's defense and what he hopes will make Arkham Origins a great game lays in that same deep well of reverence for Rocksteady's past successes.

"I wouldn't say Arkham City felt bloated or distracted, and we've tried to remain on par with that," Holmes explains. "We've tried to keep the spirit of that. Unless you felt Arkham City was bloated, you won't think we are." 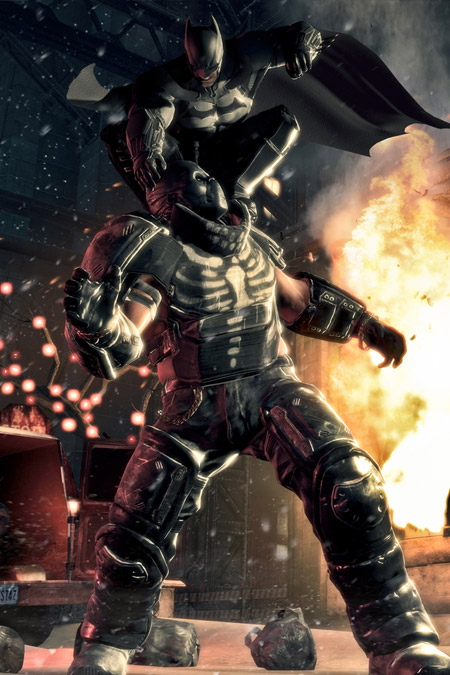 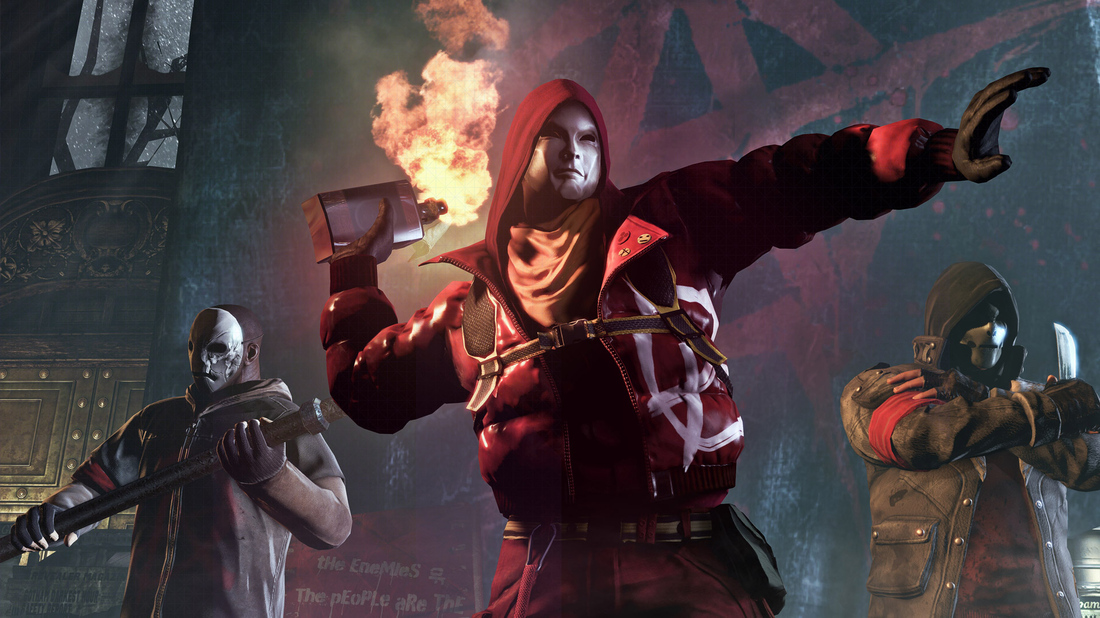 "There's an opportunity because the games are different. [Blackgate is] an original game from the ground up." Pacini is describing the relationship between Origins and Blackgate, but he could just as well be describing how Blackgate stands on its own in general.

Though informed by elements of Metroid and Castlevania games of the past, Batman: Arkham Origins Blackgate has a unique feel in our hands-on demo. Batman is a slow, meaty protagonist. He cannot jump. His punches — using a similar combat system to the console games with some modifications for 2D – have weight to them. The pace is slower and more methodical than other 2D action games.

Armature is not using the perspective shift as an excuse to downplay the series' oft-lauded visuals either. Though players always only have control over a 2D plane, the game uses constant dynamic camera angles to foster a greater sense of scope. The camera zooms in over the shoulder as Batman races down a zipline. It swoops up to a top-down vantage point as he crouches onto a gargoyle for a stealth sequence. It captures the feel of a giant, wide-open game while fundamentally trimming the gameplay to fit it onto handheld systems.

While all these elements come together perfectly in what we saw, it's hard to tell if they'll succeed through the full game. The E3 demo for Blackgate is the introductory sequence, supposedly the only part of the game that is linear and heavily scripted. Pacini's promises of an open-ended game world that can be explored in the order you want is still just a promise right now. 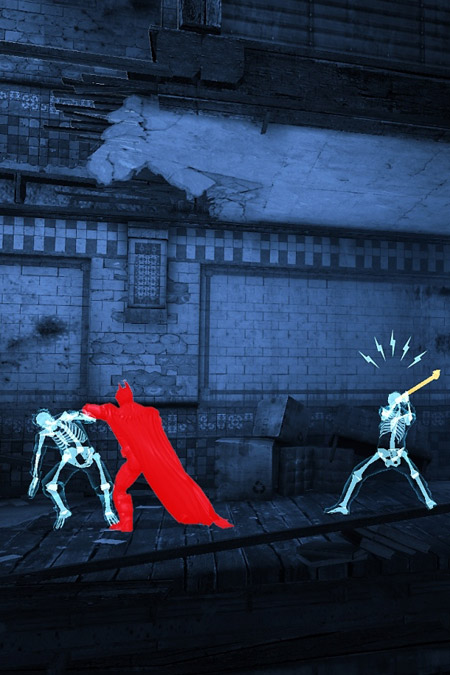 Meanwhile, our hands-on time with the console version of Arkham Origins feels like exactly what Holmes described: another Arkham game, through and through. He shows off new "Most Wanted" missions — optional side stories focused on specific villains that offer unique upgrades as rewards. He debuts new enemy types such as the armored enforcer and the martial artist, a baddie who shares Batman's ability to counter attacks. The animations during the free-flow combat seem just a little jerkier and less polished than the previous Arkham games, but it's an unfinished E3 demo.

The most interesting addition to Origins is a new crime scene investigation system that builds on Batman's detective vision. As players scan a crime scene in first person, Batman's computer software will reconstruct events, allowing him to actually fast-forward, reverse, and pause time as he looks for clues. The puzzle in the demo involves replaying a helicopter crash, following pieces of the chopper as it comes apart and eventually locating the vantage point of the shooter who took it down.

Origins's investigations seem to require more thought and analysis than the non-puzzles of the last two games, though Holmes clarifies, "We didn't want to make something incredibly difficult and frustrating." He says players shouldn't find themselves stuck in the investigations, but they will have to put the pieces together on their own. 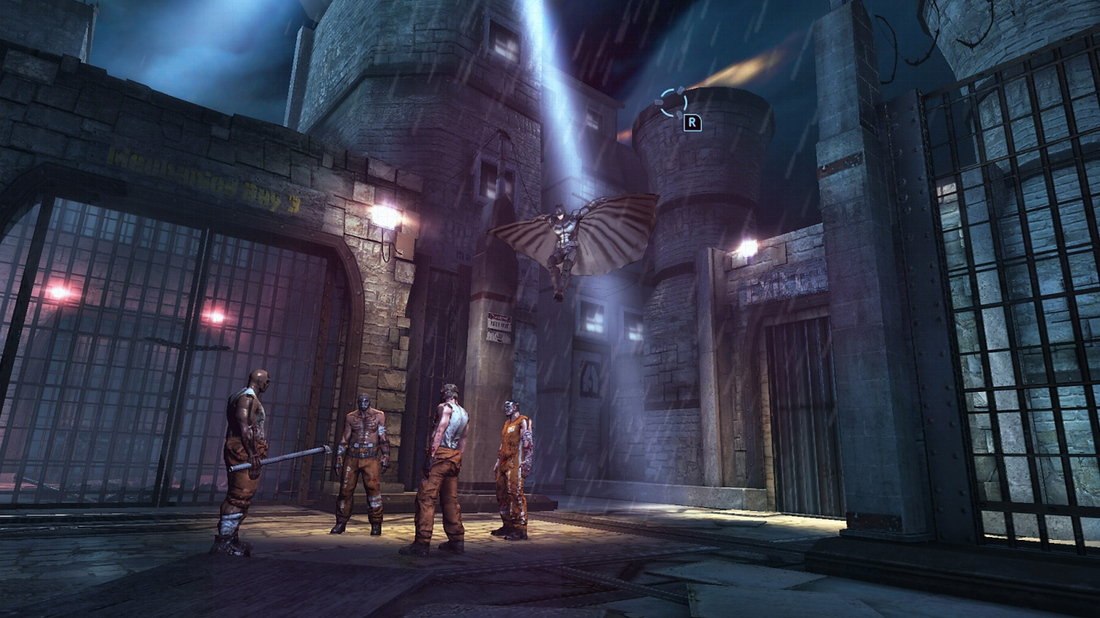 WB Montreal's clearest play to recapture what worked in Arkham Asylum and Arkham City comes at the end of the E3 demo for Batman: Arkham Origins. Batman is on a mission to hunt down the Black Mask, a lesser-known villain that WB has promoted as the main antagonist of Origins. Batman arrives at a hotel where he believes Black Mask is located. Without context and apropos of nothing, he instead discovers The Joker.

Holmes says that Arkham Origins will tell the "essential" story of Batman's first encounters with The Joker and the development of their relationship. "I would be worried if we were trying to squeeze in some non-canonical game," he says. "But we're making a game with a story that's pivotal to this franchise."

On that note, at least, Origins and Blackgate are on the same ground. Blackgate's plot picks up a few months after Origins, though Pacini is careful to point out that both stories are standalone — you won't miss out on something if you play Origins but not Blackgate and vice versa.

Despite the differences — or perhaps because of them — WB believes both of these Batman projects fit on the same release slate. "I'm really not looking at it as competing projects," Pacini says. "If you like [Origins], go and pick up the handheld version. Or if you like [Blackgate] but have never played the console versions, go pick that up."

In his praise of Rocksteady's work, Holmes points out that they "made Batman relevant in the gaming space. They've not only made great Batman games, but just two great games." 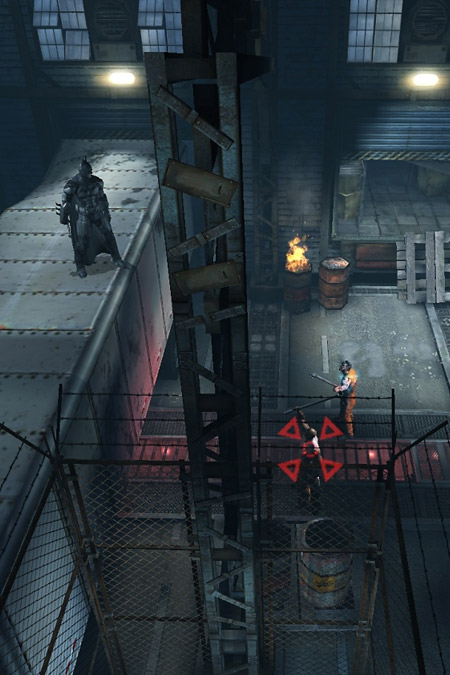