Unpacking the Quantum Break elevator pitch is its own meta-game.

In layman's terms, Quantum Break is one of those wildly ambitious projects that would be prohibitively expensive were it not funded by a billion dollar corporation determined to get people excited about its upcoming entertainment hardware, in this case Microsoft's Xbox One.

Set in the fictional Northeastern U.S. Riverport University, the story of Quantum Break follows the people who were in the presence of a time-travel experiment gone wrong — two of whom are playable. With the power to manipulate time, gained from the proximity to the failed experiment (a la The Fantastic Four), they try to repair a universe in which time is collapsing, freezing, fast-forwarding, rewinding and slowing-down.

And yet, over the course of a 30-minute presentation with the game's creators, one seemingly inconsequential aspect seemed the most astonishing: the mouths. What happens between the chin and the nose of the virtual lead characters of Quantum Break borders on lifelike. The lips purse and curl against the teeth, the teeth clinch down and the jaw lunges forward.

Sam Lake, the Creative Director at Remedy, responsible for the story in games like Max Payne and Alan Wake, laughs when asked about the virtual chompers.

"The first thing we do when we hire an actor," he says, "is we send them to the dentist to get dental molds." These are then digitized and implanted into the skulls of their digital representations.

This attention to detail is part of a system the company calls the "Northlight Engine."

The obsession with human minutiae borders on the unsettling, but the result — an emotive, lifelike virtual face — is a significant improvement, Lake says, "from the static, constipated face of [the original] Max Payne." Remedy Entertainment, Lake explains, needs the most realistic virtual characters possible, because they will be starring alongside their real-life counterparts.

Quantum Break is the latest in a trend of video game and television show hybrids that kicked off earlier this year with Syfy and Trion World's Defiance, a seasonal television show set in the universe of a Massively Multiplayer Online Role-playing Game of the same name.

Unlike Defiance, Quantum Break is a single-player game, and its television show will come included with it in its entirety — sort of like a complete season box set spliced together with a AAA video game. Lake says Quantum Break is meant to be experienced as a unified creative work. The game will alternate between extended sequences of gameplay and roughly half-hour episodes of television.

The hope, says Lake, is to get players so invested in the story that after finishing an "episode" they'll want to play, or watch, "just one more"; that they will want to experience Quantum Break they way they do a television series on Netflix.

When a player returns the following day or week or month, the game will precede the game with a television-style "last time on" vignette. Remedy did something similar with the episodic story of Alan Wake, its previous game, but this time Lake hopes the short catch-me-ups will include actual footage of the player's in-game actions.

Allowing the player to shape the story in ways like this is Lake's grand goal. Smartly so. Interactivity is the advantage the game has over a traditional television show. 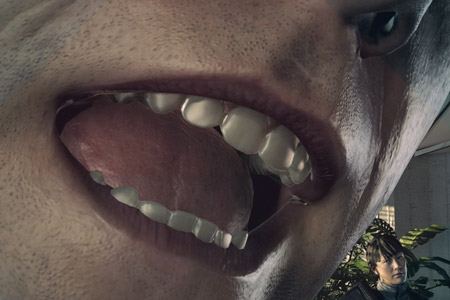 A character model from Quantum Break 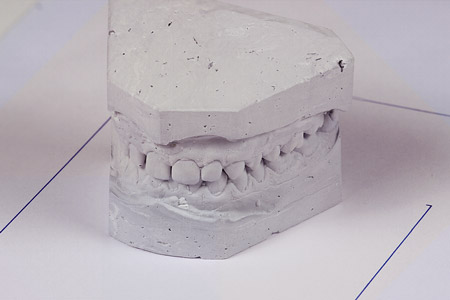 A dental mold from an actor

In the case of Quantum Break, the television episodes will be directly impacted by the player's actions and choices. For example, the aftermath of a shootout — the people you save, the buildings you demolish — might be reflected in an episode. Remedy is keeping secret how, and to what extent, it will accomplish this with live-action footage.

It sounds difficult, expensive and a bit unnecessary, raising a number of questions about the practicality of such a project. Wouldn't it be much easier to create digital versions of the episodes, rather than film live-action footage that is far less flexible? What's to be gained from what sounds like history's most expensive work of mixed-media art?

The uncanny valley is the proverbial tell on a virtual character that reminds your brain what's being viewed isn't quite human. Previously, the uncanny valley for video game characters has resided in their digital eyes, which often look like vacant marbles rolling around two shot glasses. As the art of fabricating digital eyes has been mastered, new valleys have appeared: the static shoulders, the stiff forehead, the rickety mouth.

Now, Sam Lake thinks the uncanny valley has been passed; that when people see the characters in Quantum Break, their brains won't be distracted by the unreality of the world and its citizens. He thinks the recreation of humanity is so spot on, that the viewer will notice the tiniest of emotive action — that curl of the lip — on a character in the virtual world and spot it when the same character (or actor) appears in the live action footage.

With that level of precision, it's not that they couldn't create the whole project as a video game, rather that doing so wouldn't attract the much larger, much broader audience that watches television, but maybe only plays a couple games a year — or has never played one.

For the newcomer, Lake says, "television is an entry point." And for the gamer, the mixed-media is a reflection of the world we live in: consuming television, games, text and music, often all at the same time. Lake loves these spells of high-level talk, and you can imagine his ambition, like a balloon, is what makes him special, but also must be occasionally grounded for fear it carry him off into the clouds. 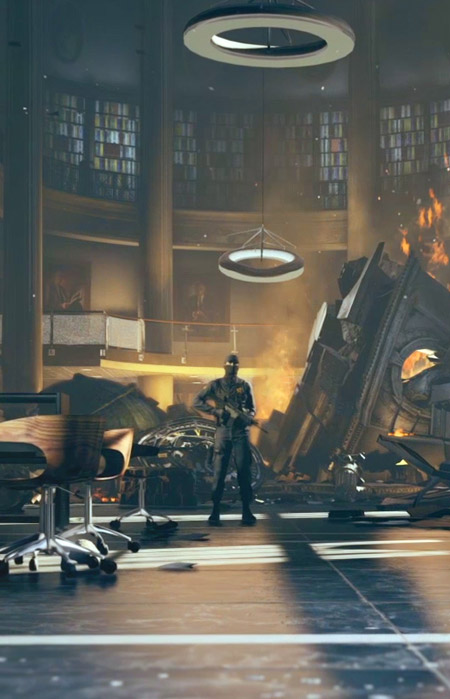 That ambition could change the way we enjoy games. And television. That's what interests Microsoft, who has a lot to gain from this project: a game that strives to make gamers of everyone who owns a television; a television that introduces gamers to the joys of binge watching. Quantum Break is a double-sided gateway drug handcrafted for a living room device that intends to be the future of both mediums.

And so, Quantum Break is the essential Xbox One game; the manifestation of its philosophy. It's big, ambitious, medium-bending and a pinch confusing. And it could be the future. Or it could be a bellyflop. But like the Xbox One, it will likely be the former, because it has the talent and resources, time and money.

Remedy beefed up the 55-person team behind Alan Wake to 100 employees. They have the support of consultants, Xbox Entertainment, Microsoft and a rapidly expanding Finnish development scene.

If something like Quantum Break can work, this is the best shot it'll get. After all, few video game studios have the sway to demand dental molds.