Dying Light may look familiar, but it's not the same old game.

Techland international brand manager Blazej Krakowiak is passionate about zombies. He has a massive list of books and movies that the studio draws on for inspiration – from The Walking Dead and 28 Days Later all the way to George Romero’s classic original zombie flicks.

These sources are all variations on the same general zombie mythos, but they cover a wide variety of tones and styles. And that's why Techland feels comfortable starting work on its second zombie IP.

"We are trying to look at the zombie genre as this broad pop culture phenomenon," Krakowiak says. “We think this is where the strength is: It’s not just one specific thing. You can bring more ideas into it."

Compared to the chaotic hack-and-slash nature of Techland’s previous work with the Dead Island games, Dying Light is overflowing with ideas. 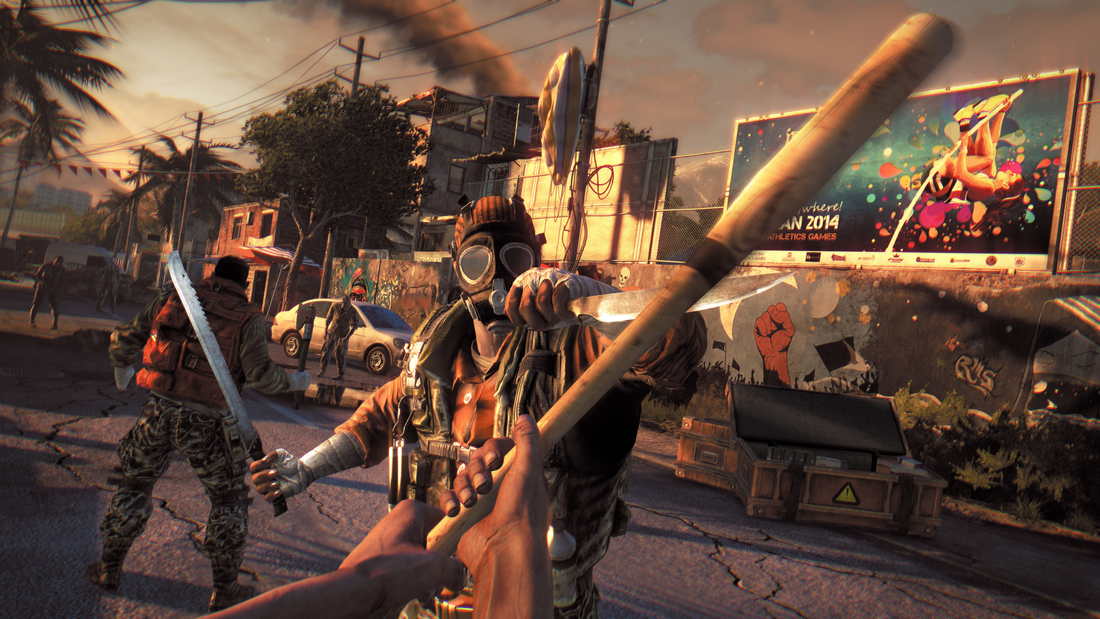 Dying Light seems overly familiar at first glance. It's set in a dusty, run-down city not unlike the middle section of Dead Island. You use melee weapons to decapitate and disable hordes of infected humans. You do sidequests for experience points, and there's even a crafting system that allows you to piece together weapons such as an electrified machete. The DNA is not hard to spot.

The E3 demo begins with the main character watching a plane fly overhead and let loose two cargo drops a few miles away. The unnamed protagonist lives in the middle of a quarantined zone in the city of Harram, a fictional locale inspired by the clash of cultures seen in cities such as Istanbul.

Along with his partner Jade, the protagonist been locked in the quarantine zone for two months while the virus spreads and the city turns into more and more of a slum. Supplies are limited and people are panicked. When he sees the air drop, he vows to get to the supplies before anyone else.

At odds with the methodical movement of Dead Island, Dying Light's main character is incredibly mobile. He runs past zombies more often than actually fighting them, leaping across rooftops, crashing through barriers and generally vaulting over any obstacles that get in his way. Krakowiak calls this addition "the simplest thing imaginable." 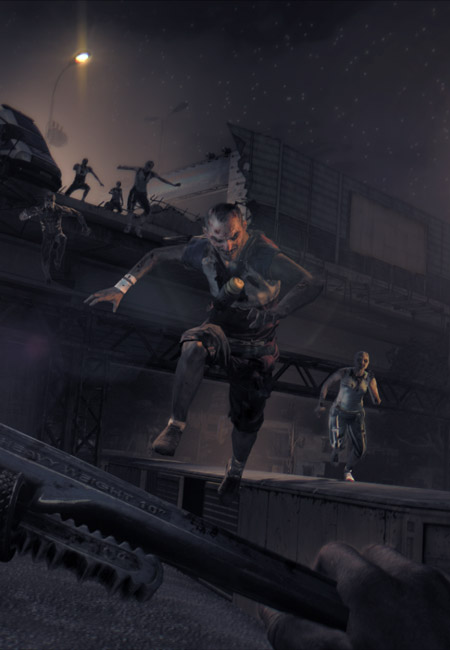 "We looked at it from the direction of what was missing in zombie games," he says. "If I'm trying to survive, shouldn't I be able to run, jump, climb, utilize the entire environment? Just walking on the street level isn't very smart for humans."

Krakowiak believes mobility adds "more freedom to the sandbox," expanding the options that a player can explore in any situation.

One of those options pops up quickly in the demo. As the main character leaps from rooftop to rooftop, avoiding the slow biters below, he hears a scream for help coming from a house. Krakowiak notes that this showcases the game's randomly-generated side mission system.

"We want the world to feel full of events, opportunities and distractions," Krakowiak says. "That's what I think worked very well in the past."

As he enters the apartment, the main character is surprised by a zombie lying on the floor. The creature latches onto his leg and bites him once before getting its head smashed in. Krakowiak takes this opportunity to explain that the main character is actually already infected. "That will be a major part of our story," he says, "but we're not talking much about it yet."

After the mysterious main character rescues a traumatized young girl from a closet where she's hiding, he continues his journey to the supply drop.

In Dead Island, killing zombies was the goal above all else. By contrast, Dying Light puts players into situations where avoiding confrontation is not only rewarded but necessary. Krakowiak compares it to "the rise of survival simulations" such as Don't Starve and Minecraft.

In the E3 demo for Dying Light, the main character pulls himself up to a highway overpass where one of the supply drops has landed only to discover a massive horde of zombies clogging one side of the road. Though he can take on a handful of enemies with his small arsenal of melee weapons, a group this large would easily overpower him. Instead of fighting, he tosses a sparkler further down the road. The zombies are distracted by the flashing light and head toward it as the main character dashes in the opposite direction.

The AI of human characters gives players a choice. If you don't get too close or act violently first, they won't necessarily attack you. In this case, the main character realizes that he's outnumbered and decides to leave. But it won't always end this way.

"You have to think of an apocalyptic scenario where resources are scarce," Krakowiak says. "If you're not ready to give up all those resources, you will come into conflict with other humans."

By the time the main character finally reaches the second supply drop, the sun is setting on the game's day-night cycle. Over a headset, Jade urges the main character to hurry and grab the supplies before it gets dark, but he's not going to make it.

The switch to night plays a huge part in Dying Light. It's when the "most lethal predators" in the game appear. They're called volatiles, and Krakowiak describes them as "unlike anything else in the game, super-dangerous, agile, terrifying creatures." 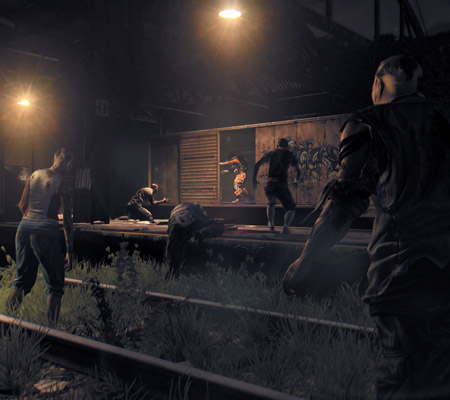 Sidebar: What about Dead Island?

The second Dead Island game, Dead Island: Riptide, just came out a few months ago, and it's hard not to shake the feeling that something went rotten between publisher Deep Silver and developer Techland in the process.

When we asked Krakowiak about whether the studio would ever return to Dead Island, he curtly replied, "Dead Island is Deep Silver's IP. You should ask them about that."

When we reached out to Deep Silver, a PR representative reiterated that the publisher owns the rights to Dead Island: "We have not announced any new projects within that universe. We have no comments on Techland's new project."

Whatever happened with Dead Island, it doesn't look likely that we'll see another Techland-helmed project in that series in the near future.

By the time he has grabbed some supplies, shadow has covered the game world, and the main character can hear the growls of nearby volatiles entering into the world. He crouches and hides around corners to avoid them. He can send out a sort of radar ping that allows him to see where enemies are wandering through walls. He's able to make it some distance without being seen.

Inevitably, though, one of the monsters spots him. The volatile are incredibly fast, and they are aided by regular zombies that power up at night. This combination is not meant to be fought. It is meant to be avoided.

"If they catch up to you, you're dead," Krakowiak says as the main character literally runs for his life. "We want players to be able to stand and fight during the night, but there is a point where you're never strong enough."

This philosophy is so different from (and so much more interesting than) Dead Island's approach to zombies. The infected of Dying Light aren't just enemies filling an otherwise lifeless world; they are an actual threat and the reason that everyone in this city is so desperate. 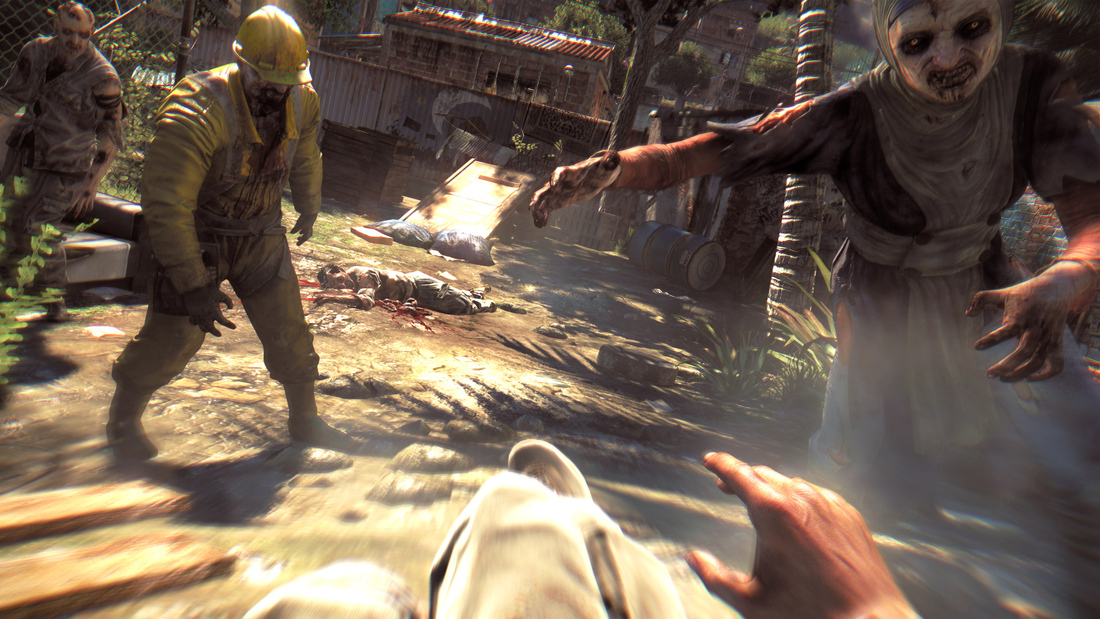 Not everything in Dying Light will be such a life-or-death situation. Krakowiak says the studio is "trying to create an action game that's enjoyable" first and foremost. "We're trying to up the survival element, but we don't want to punish people for playing," he says.

In our hands-on time with Dying Light, we can see what he means. Despite the main character's wide range of movement, the controls are easy to grasp. Getting around the environment is easy.

"If something in the world looks like something that you think a fit person could reasonably climb in real life, it works in the game," Krakowiak says. "It's the easiest thing to learn. You're no longer thinking in terms of game mechanics. It's an intuitive way of getting around the world."

Though the city is huge and open-ended, navigation comes naturally. We never find the main character trapped in a pit he can't get out of or struggling to find the right way up the side of a house. That's a difficult-enough feat in a linear platforming game; pulling it off in an open world is especially impressive.

If combat is more your pace, that seems functional in Dying Light as well. Melee weapons smash and slice enemies with satisfying bone snaps. A stamina system allows you to charge up swings for special attacks, such as slashing in a full circle around you with an axe or a powerful ground pound with a sledgehammer. Fighting isn't the main attraction but it still seems thought out, well-paced, and challenging.