Earlier this year Plague Inc., the popular mobile game that has players controlling a disease as it attempts to wipe out humanity, made an appearance at the CDC.

Next month, the Centers for Disease Control and Prevention return the favor, making an appearance in the game.

The in-game appearance of the CDC is planned as a subtle form of education, a chance for the CDC to reach the ever-growing fanbase of the Android and iOS game, James Vaughan, Ndemic Creations founder, told Polygon.

The CDC will be introduced into the game as part of a free patch next month, which will also bring with it a new leaderboard-driven speedrun mode.

The CDC will show up in Plague Inc. as new news alerts in the game, replacing some of the generic headlines with actual news drawn from CDC press releases about health and safety. Vaughan said he's also looking into ways to allow people to get more information about the news outside the game, if the headline interests them.

The CDC will also pop up in the game as a new event.

But the player controlled disease will also have ways they can thwart the CDC hunt.

The in-game appearance of the Centers comes after Vaughan was invited to speak at the CDC in March about how his game was getting people interested in disease control and how he modeled the spread of disease in the game.

"They're always keen on using novel ways of engaging the public," Vaughan said. "They're scientists and they can be so passionate about a topic that they want to give all of the information, to a person at once. But to an average person who doesn't have their IQ, it's like being blasted by a water cannon."

Plague Inc, seemed like a great way to feed a little bit of information to the public without scaring them off and the addition of the CDC is a perfect fit for the game.

Unlike an earlier deal, which Vaughan described as a "commercial venture", that added Risk Management Solutions to the game, the CDC addition has no money tied to it. While the RMS deal was paid for, Vaughan pointed out it also brought with it access to the company's epidemiology experts, allowing him to increase the title's realism. 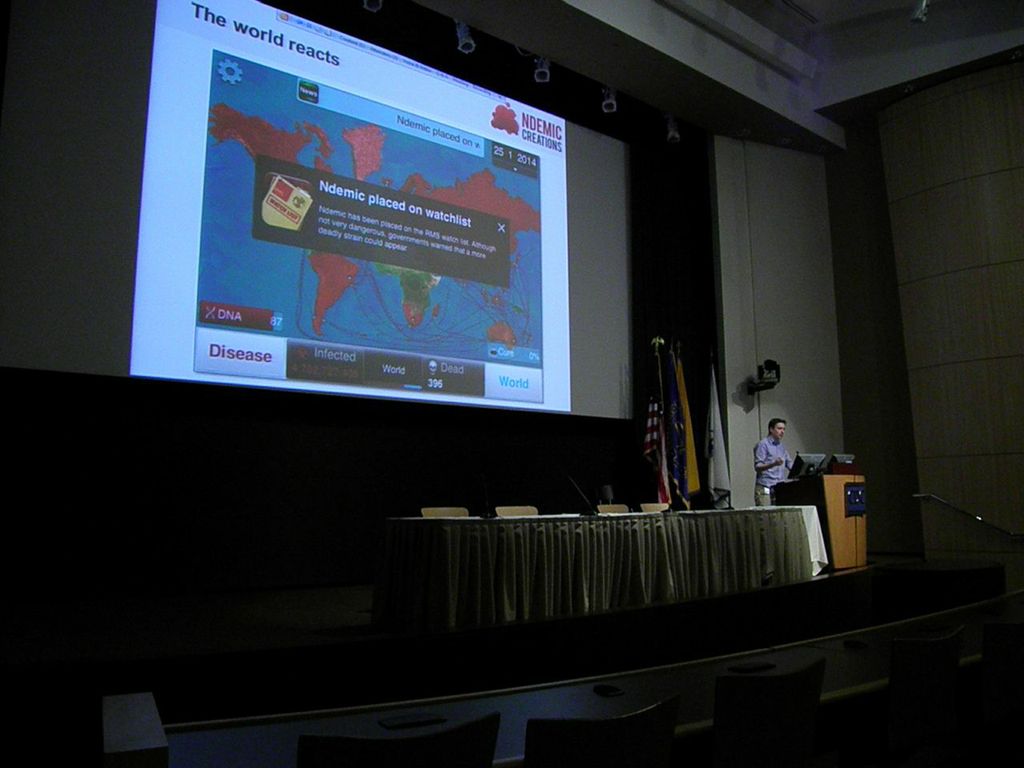 Vaughan, who's company recently brought on a second freelancer developer, said he's spending all of his time now working on additions to Plague Inc.

"I have ideas for brand new games that I'd love to do, but I can't," he said. "I need to make sure I'm doing everything I can for Plague Inc."

Among the things coming to the title are at least two new content packs. While Vaughan declined to detail what they would be, they would likely be of the same depth as the pack that brought a zombie plague to the game.

Vaughan, who is based in London, is in New York this week for the annual Games for Change Festival. In his talk today, he discussed the importance of focusing on fun and simplifying complex ideas and structures if you want to make a game that is educational, even if it educates by accident.

In the case of Plague Inc., Vaughan said he's received emails from people who use the game to learn about topics as diverse as government affairs, geography and anti-biotic resistance.

"I didn't set out to make an educational game," he said.

Vaughan said he also thinks it allows people to ponder important questions they might not normally think about, like the way their government might react to an outbreak.

"Would your government really execute a load of people who are infected to save the planet?" he asked the audience. "Should they do that?"

Ultimately, the ability of Plague Inc. to educate is driven by it popularity, which in turn is driven by how much fun it is, he said.

"Anyone can pick it up and kill a billion people," he said. "You've got give people a pleasurable experience. If it's not a pleasure, they're not going to tell their friends about it. And there's enormous potential there."