At an event like E3, it's not unusual for a group of strangers to sit down at a multiplayer co-op game and play together without ever communicating with each other. The unspoken expectation among players tends to be, "just figure it out." You can try this approach when playing Spearhead Games' Tiny Brains. But it won't get you very far.

At E3 last week, Polygon jumped into a game of Tiny Brains with three random players who had been pulled into Spearhead Games' booth on the show floor. After a quick tutorial from studio co-founder Simon Darveau where he explained that we would be playing as lab rodents who had developed physics-based super powers after being experimented on, we were tossed into our first obstacle course. 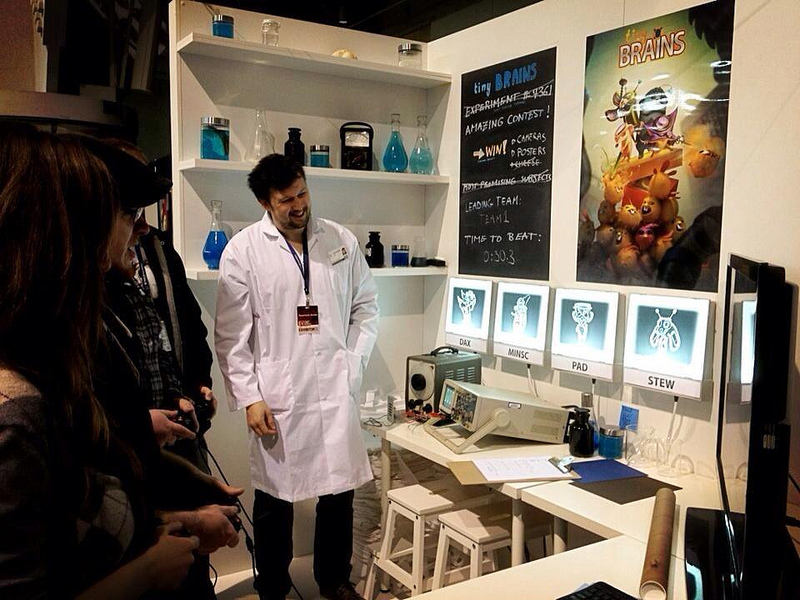 During the first few minutes, the four rodents ran around like confused blind mice, testing out their powers. The Polygon rodent had the ability to attract objects. One of the other rodents could repel objects, similar to the way The Force works in Star Wars. The third rodent could switch places with objects and the fourth could create ice cubes from thin air, although these cubes would melt within seconds of being created. Together we had to solve puzzles in order to open up doors that would lead us to more obstacles that had been created to test our abilities. But first, we had to stop running into each other.

Tiny Brains is a game where being social is the only way to make progress. After accidentally mashing our rodents into each other for the 20th time, we turned to each other in real life and did what so few games require of us: we talked to each other. We pointed at the screen to indicate where each rodent should be. We organized ourselves and planned our approach.

In an early level of the demo we played, our rodents had to move a battery pack from an adjacent platform to our platform in order to power a door. The problem was the platforms were divided by a gaping hole in the ground, and our teleporting rodent could not get a good enough view of the battery pack to switch places with it. After many attempts that involved us all jumping to our deaths in the hole, the following conversation took place in the real world.

The four of us were skeptical it would work — it seemed both too complicated and unlikely that the developers would allow for such a thing. But we were stuck, so we gave it a shot. Everyone moved into their place. First, the ice-making rodent created a little cube and placed it on the edge of the platform. He quickly ran out of the way while the force rodent pushed the cube out into the hole. The teleporation rodent immediately zapped the ice cube, switching places with it, and as soon as the battery pack was within view he zapped the pack and switched places. Our little rodent then ran to the edge of the platform and used our attraction powers to pull it in. It worked. 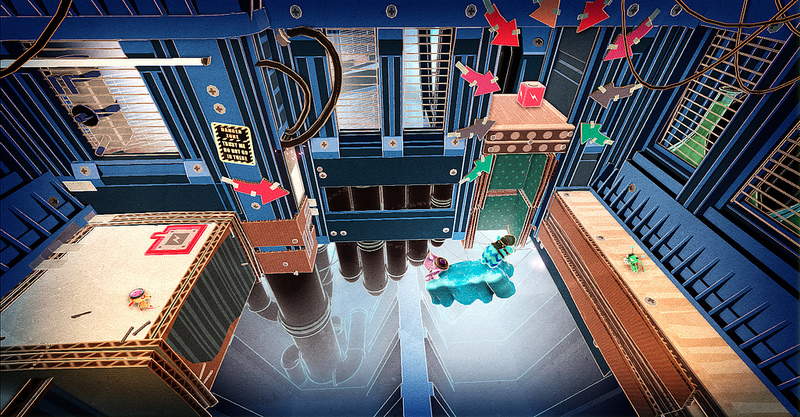 In another level, we were tasked with moving a ball up a tube to see how far we could get it. The tube was spinning clockwise and its wall was falling apart, creating holes. The rodents had to work together to not only move the ball upward, but to stop it from falling into holes. Once again, communication was key. Our object-attracting rodent ran ahead of the ball, the force-pushing rodent moved behind, the ice cube rodent stayed close below while the teleportation rodent stayed far ahead. Together we force pushed and pulled and zapped the ball upward, dodging holes in the ground. Whenever we lost control of the ball, the ice cube rodent would place down a block to stop the ball from rolling back down the tube, giving the rest of us enough time to regain control.

When we spoke to Spearhead Games earlier this year, Simon Darveau told us that the game was designed to encourage players to communicate with each other in the real world.

If our E3 demo was anything to go by, it seems like Spearhead Games has succeeded in its mission.

Tiny Brains is coming to current-gen consoles and has also been announced for the PlayStation 4.