GUNPOINT IS A PUZZLE GAME, AND A PLAYGROUND

I am Richard Conway, star of Gunpoint.

The third-story plate glass window turns to razor-sharp confetti as I hurl myself through it. My landing is softened by a guard who I put to sleep with a single rabbit punch. A second guard, drawn by the noise, throws open a door and pulls his pistol on me. He fires, but instead of sending me to the Great Beyond, the pull of his trigger ... shuts off the lights. He's mine.

I am a spy-for-hire, and I am very good.

When fans of gaming clamor for innovation, real innovation, it's in hopes of moments like this. We've been shooting people in the face for two decades and I don't know that it really makes me feel anything any more. But when mechanics are as fresh and well-composed as they are in Gunpoint, allowing your imagination to buy into the fantasy isn't just easy, it's instinctual.

Richard's two-dimensional missions in Gunpoint are usually simple enough: penetrate a locked-down facility, get something of value, get out. Conway's aided by his Bullfrog pants, which allow him to leap dizzying distances and cling to any surface. You choose the trajectory and power of your jump with your mouse and fling your hero forward, hoping for the best.

It feels fantastic, especially as the device's power evolves over time. Thanks to some intricate animations and sound effects, there's a great sense of power (and a little vertigo) every time Conway launches himself into (or over) a building. Using it for quick escape (like sticking to a ceiling as a guard passes underneath) feels equally ... right.

Gunpoint is a puzzle game, and a playground 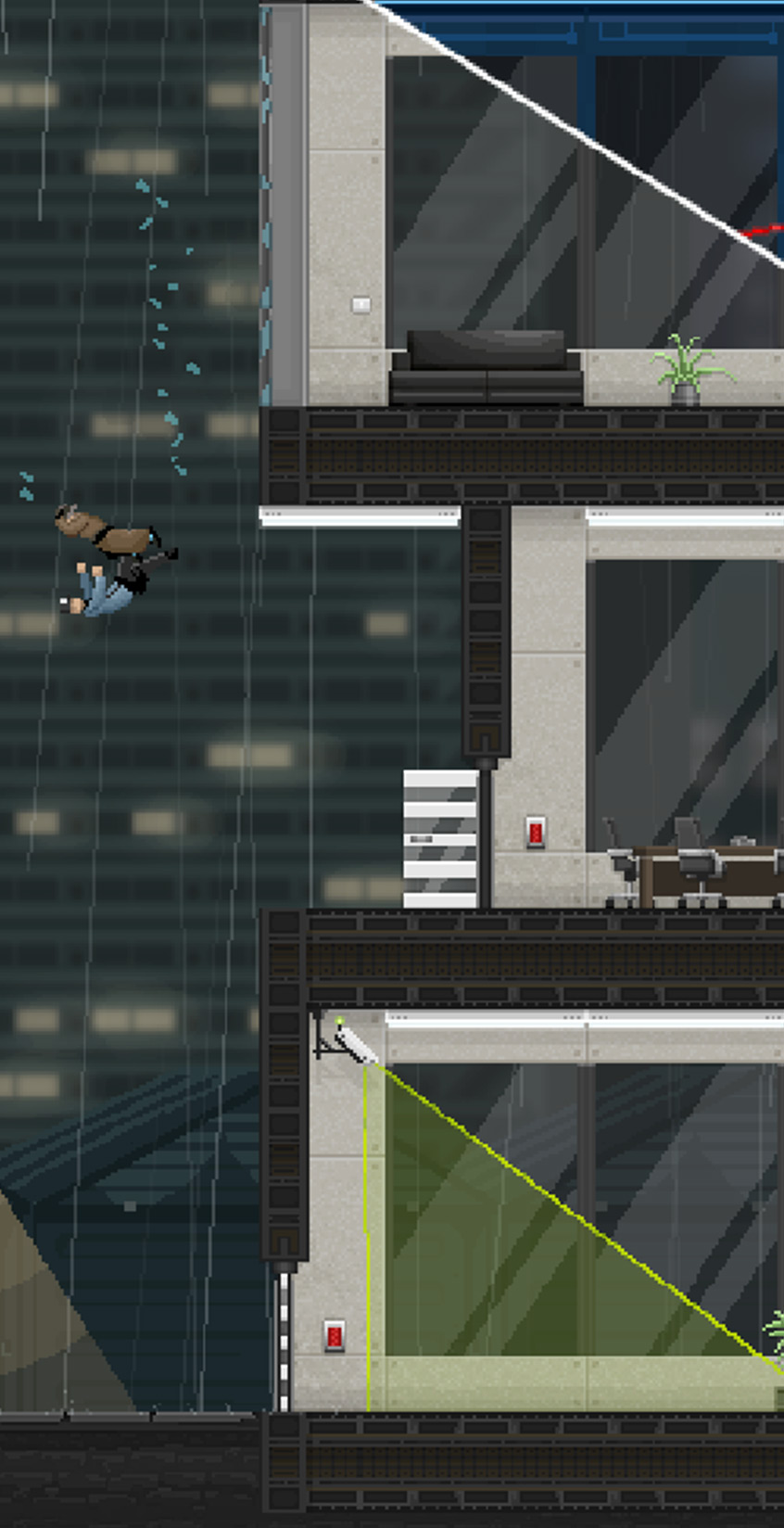 Instead of stopping there, developer Suspicious Developments hyphenates Gunpoint's genre with the addition of the Crosslink. By pressing the Alt key, Conway sees a wireframe of his targeted building and the colorful network of electricity that connects every device and switch therein. By clicking and dragging between two devices, he is able to rewire them and create traps, diversions and even pathways to his goal.

This is easier to understand in practice: In one level, I rewired a building so that the ping of my elevator arriving triggered a sound detector in that room. That sound detector was rigged to a light on the floor above, turning it off. A guard on the floor moseyed to the nearest lightswitch to rectify the problem, except I had connected the lightswitch to an adjacent locked door I needed to pass through. And guess who was on the other side of the door waiting to leap at the unsuspecting guard and incapacitate him? 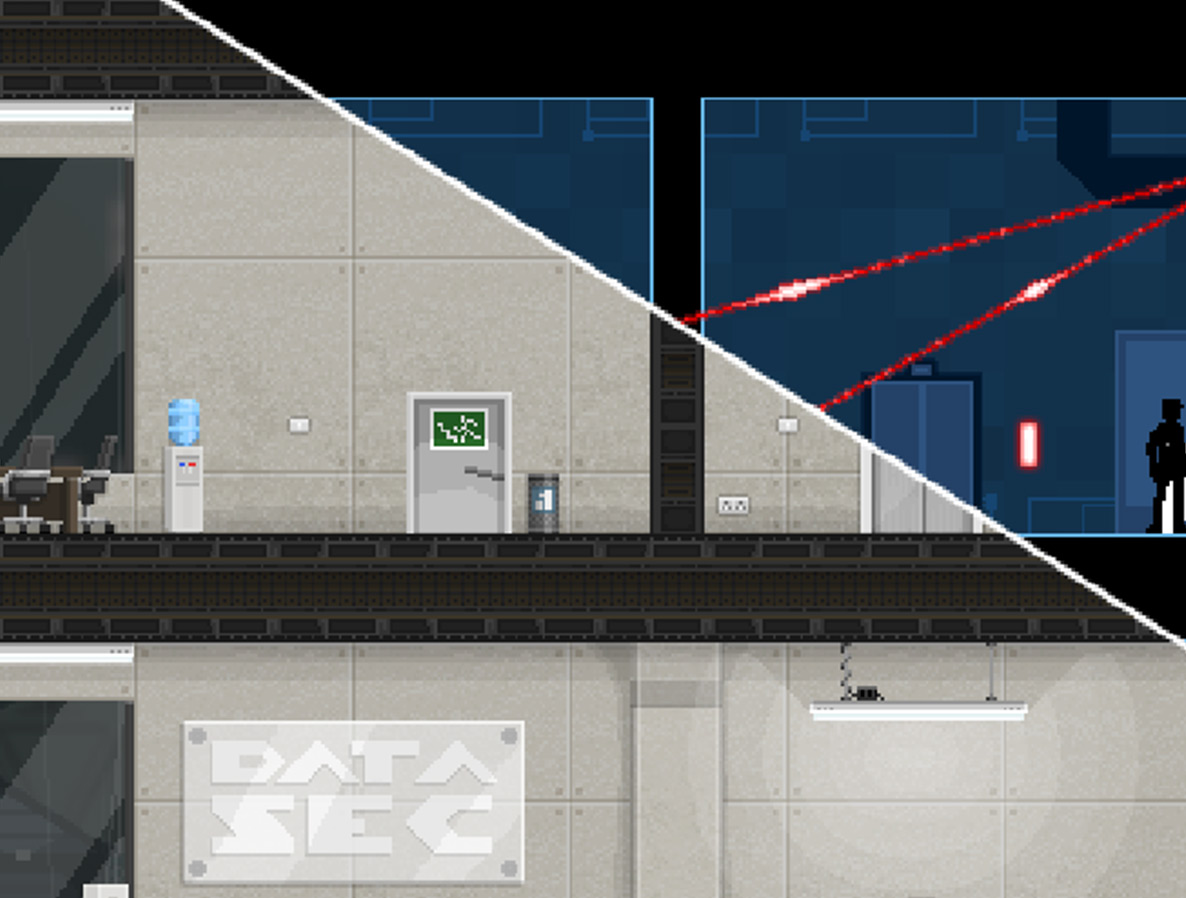 This turns Gunpoint into something of a puzzle game, but it's also a playground. Sure, your plan of connecting an elevator button to a trapdoor may not pan out, but it's almost as much fun to watch it go wrong and try to recover on the fly. Even if you have to resort to gunplay (most levels reward you for silence and non-violence) or are killed, you always have the opportunity to return to an autosave just seconds prior, so there's no risk in experimentation.

As Conway upgrades his abilities - like the power to turn switches into deadly traps by connecting them to an outlet - the possibilities get even broader ... and more sadistic. 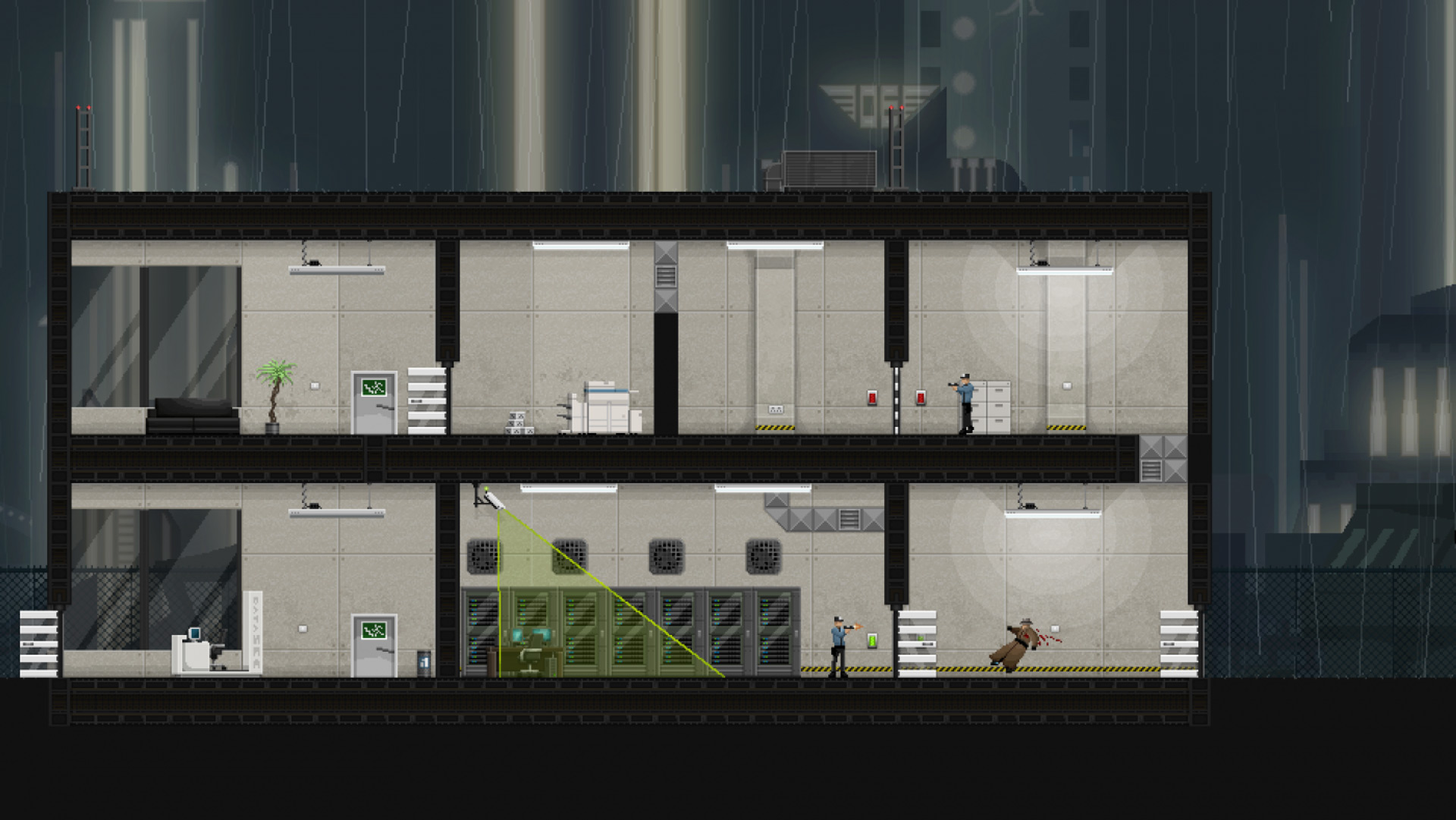 If you want some additional challenge (and money for upgrades) you can retrieve data from hacked laptops in many levels. I was so invested in Conway's scalpel-sharp execution that completing every aspect of each mission was basically a given.

The exquisitely designed mechanics are well-supported by a fantastically moody soundtrack that blends jazz and electronic influences and a wry, if a touch convoluted, story. You can typically choose between a couple of missions to attack, but bouncing back and forth between narrative threads can make the story a bit tough to follow.

Gunpoint is a delightfully lean experience

Gunpoint isn't a long game - for $10, it doesn't have to be - but it's a delightfully lean experience. From the mechanics to the artistic direction, any trace of bloat has been done away with (if it was ever there to begin with). As mainstream games continue to balloon in budget and feature sets, Gunpoint is a bracing reminder of how lovely simplicity, when exquisitely executed, can be.

Gunpoint was reviewed using a code provided by Suspicious Developments. You can read more about Polygon's ethics policy here.