Opinion: The biggest news of E3 was Apple's controller announcement (no, really)

Share All sharing options for: Opinion: The biggest news of E3 was Apple's controller announcement (no, really)

The most important piece of hardware during E3 was a controller — and it was 400 miles away.

At Apple's WWDC press event in San Francisco on Monday, the company announced that its upcoming iOS 7 software — the operating system for iPhones and iPads — will finally support traditional video game controllers. The news was met with enthusiasm from a number of developers and abject uninterest from the rest of planet Earth. After all, when compared to the rest of E3's fantastic gaming announcements, this one seemed small fry.

I suspect that, in time, that opinion will change; that a small addition to Apple's iOS may have a grander impact on video games than either Microsoft's Xbox One or Sony's PlayStation 4. That is, if Apple nurtures this seed to its furthest potential.

an iOS device becomes a mobile console and a living room console, all-in-one

If Apple finds a way to standardize traditional controls, every iOS device will become a transportable console. In a year, both iPhones and iPads will approach the processing power of the current-generation devices. Companies will have the ability to port controller-based games for the mobile devices in millions of pockets — an install base far greater than they've ever had before.

Today, using AirPlay and an Apple TV, players can stream their games from their iOS device to their high-definition television. With controller support, players will be able to play more traditional, non-touch games.

iPhones and iPads will be like untethered Wii U's. Where Nintendo's device streams information to a tablet, iOS 7 will stream to your television. The direction of the flow is important, because while the Wii U tablet can't leave your living room, an iPhone can.

Essentially, an iOS device becomes a mobile console and a living room console, all in one. You will have one device that lets you play all of your games wherever and however you want. Microsoft and Sony are interested in locking the media you consume into the living room. But Apple could one up them by keeping everything — music, television, film, games — with you at all times. 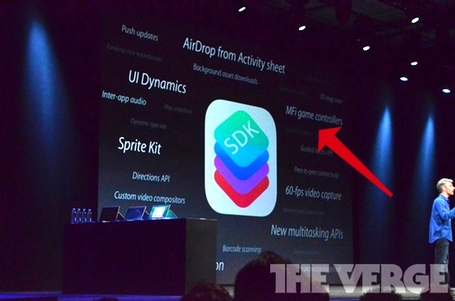 There's a big if. Knowing Apple's history of gaming — collecting billions of dollars off gaming apps, and otherwise ignoring their existence — the odds are not great that it will properly invest in the potential of gaming on iOS. (Although it's worth noting Apple's raking in that absurd amount of money when it's hardly trying. What does that say about Microsoft and Sony?)

Turning iOS devices into portable consoles would require partnerships with major developers, a restructuring of the App Store and a reassessment of app pricing — none of which have been a priority for the company in the past.

Worse, Apple won't be releasing its own controller, instead leaving that to the many companies that feed like vultures on the iOS accessory market. Third-party controllers tend to be sub-par. Worse, the lack of a first-party controller prevents standardization. One controller may have four buttons. Another may have eight. Developers need a specific controller layout to design to, lest they create for a splintered market.

With iOS 7, we can expect dozens if not hundreds of games to take advantage of controller support

Why partner with third parties? Because they already exist. For Android, dozens of wireless controllers are already available. And for iOS, a handful of controller makers have created controllers that sort of hack around the current software. Third-party controllers are ready to be produced and released at the drop of a hat. They can test the market for Apple, and if it likes what it sees, perhaps it will make a grand, first-party entrance.

Apple also has a real reason to change the way it looks at games. Games could be what sells its next-generation Apple TV. With iOS 7, we can expect dozens if not hundreds of games to take advantage of controller support. If (read: when) Apple announces an App Store for a new Apple TV, all of those games will be ready to be played with a controller. In effect, the Apple TV will be a $99 game console/media device, launching with many controller-friendly apps.

Valve's CEO Gabe Newell spoke about this in January at the University of Texas.

"The threat right now is that Apple has gained a huge amount of market share, and has a relatively obvious pathway towards entering the living room with their platform," Newell said. "I think that there's a scenario where we see sort of a dumbed-down living room platform emerging — I think Apple rolls the console guys really easily."

Ten years from now, we may look back and say controller support was the most important announcement of E3 2013. But only if Apple wants it to be.