Share All sharing options for: Games for Change 2013 keynote speakers discuss broadening the horizons of gaming

The 10th annual Games for Change conference kicked off Monday in New York, and the second day of sessions closed yesterday with half-hour keynotes that touched on similar topics with very different approaches.

The first talk, from gaming journalist and critic Leigh Alexander (pictured above), focused on an issue she has previously advocated for in her writing and at conferences such as Different Games: diversity and inclusivity in games. Jesse Schell, the CEO of Schell Games and a faculty member at Carnegie Mellon University's Entertainment Technology Center, followed Alexander to discuss the homogeneity of the American education system and the place of games in education.

"The largest vertex of the [modern] commercial games industry, I think it's fair to say, was mostly founded by white guys who grew up with a Super Nintendo and a Game Boy — possibly a Sega Genesis — and a persecution complex," said Alexander, characterizing the vast majority of games as power fantasies designed by people who were bullied in high school for being nerds.

According to Alexander, games suffer from a lack of diversity because their creators do, and because the tools to make games have — until very recently — been restricted mostly to people of privilege: Development kits for traditional consoles cost tens of thousands of dollars, Alexander pointed out.

"I sort of feel like democratizing games is a moral imperative"

"I sort of feel like democratizing games is a moral imperative," said Alexander. "Games as a medium are not doomed to be big-budget male power fantasies or corny also-rans to film and television."

Alexander went on to list personal games created by independent developers, including a couple of titles from the ascendant queer games scene, Anna Anthropy's Dys4ia and Merritt Kopas' Lim, both of which are representations of their respective creators' struggles with going through life as transgender individuals. And both Anthropy and Kopas had no formal training in game development; instead, they used cheap or freely available tools to make their games.

Those tools, Alexander argued, "give a voice to the people who haven't had a voice." With outsiders making games, the medium will become more diverse, and that's only a good thing. And as so-called serious games join entertaining games, perhaps the conversation around game quality will shift, too.

"Maybe we can think in terms of effective or not effective, in ways that aren't necessarily statistically measured, and instead of fun or not fun, or good or bad," said Alexander. "You know, what's wrong with real or not real?" 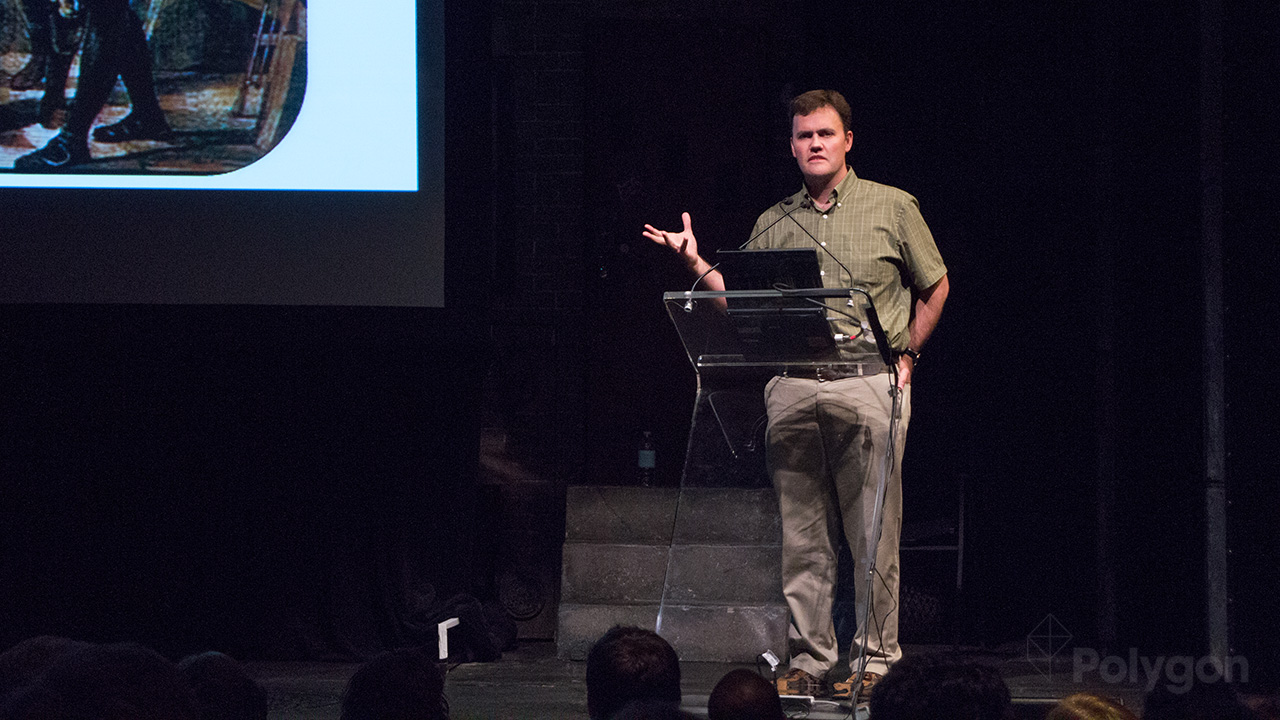 After Alexander concluded her keynote, Jesse Schell (pictured above) presented a lecture he called "Sheep, Goats and the Future of Education." Schell, who teaches at Carnegie Mellon University and runs his own studio, Schell Games, pointed out that people from all walks of life are trying to figure out what place games have in education. He spent his talk examining the psychology of education, classifying people into two categories: sheep and goats.

The traditional education system, Schell argued, has been designed almost completely with sheep learners in mind. It started out that way because centuries ago, most work was "sheep work" — industrial jobs in factories, for example — and even today, most standard education doesn't offer much about career options like becoming an entrepreneur. But the internet makes it possible to teach yourself almost anything "crazy fast," said Schell. In other words, the internet caters to the goats — it rewards curious people, and if a person possesses curiosity about the world around them, they'll stay curious.

"the sheep and the goat need to be in balance"

Games, too, are in line with self-education. Games, said Schell, "fit really well with pursuing things at your own pace, at your own rate, the way you want to pursue them." He added that although many people today are saying that games and goat-oriented learning will revolutionize the face of education, he doesn't think that's the case for three main reasons: Schools are slow to change; sheep skills are valuable and can't be discounted; and people value the "sheepskin" — a college diploma — a lot.

Schell also pointed out that most people aren't interested in "goatware," the educational games that developers might make. Parents don't want to pay for it; kids don't want to use it after spending all day in school; and administrators don't want to hear about the gaps in their system that it might address.

"The teachers," he finished, after an audience member uttered the word. "The teachers want your goatware — at least, the good teachers do." Teachers, said Schell, know that schools do a poor job of supporting the goat side of learning, and teachers are interested in anything that might help them with that.

Schell closed his talk with a plea to goatware developers.

"the teachers want your goatware"

"I'd like you to think for a minute about that one teacher in your life that made a real difference for you," he said. "And now I want you to think not about creating software for kids or for parents or for administrations. I want you to think about what tool could you make for that teacher that would have made their job easier, that would've been able to get them to carry out their mission, and to make a difference — like they made for you — for more people than they could've.

"And the last thing I want you to do," said Schell, "is to go out and make that tool."