Our Darker Purpose explores what happens when an abusive authority disappears

Share All sharing options for: Our Darker Purpose explores what happens when an abusive authority disappears

Action role-playing game Our Darker Purpose was inspired by a fascination with the psychological results when an abusive authority suddenly disappears.

"We loved the idea of what happens in the absence of authority, and particularly what happens if authority is malevolent," Avidly Wild Games co-founder David Roth told Polygon. "It's like the classic Edward Gorey picture with the skeleton holding the umbrella over the kids, The Gashlycrumb Tinies. And a lot of different literature deals with failure of authority."

Roth said the development team drew heavily from Shakespeare's play King Lear — the figure in charge, a force of terrible power, is suddenly extinguished and all hell breaks loose. The team even named their main character, Cordy, after the play's voice of reason: Lear's youngest daughter Cordelia. The name of the game was also taken from the play, a quote by Lear as he prepares to divest his land to his children in preparation for his own death: "Meantime we shall express our darker purpose."

Other literary influences are William Golding's Lord of the Flies and Neil Gaiman's Coraline, both of which focus on children on their own in great danger. 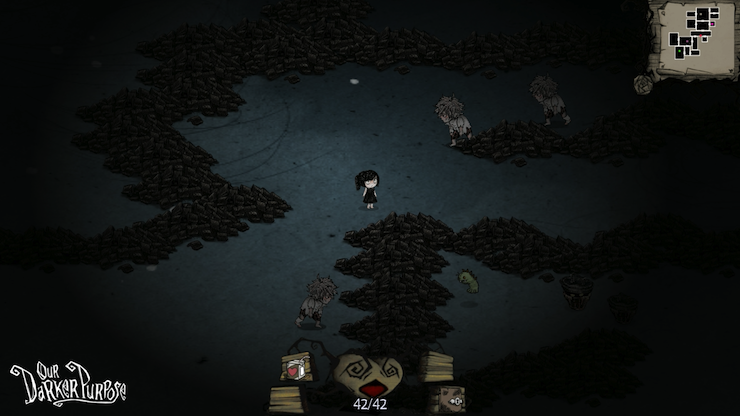 "Lord of the Flies deals with the brutishness of kids," Roth explained. "It's really a nightmare picture of what happens when they are left unchecked — essentially, what happens in the absence of authority. In our game, the teachers disappear, and the kids fall into these warlike factions.

"Coraline deals more with what happens when authority is evil, but pretending (badly) to be good," he continued. "This gets reflected in the mysterious Administrators who run the school [in Our Darker Purpose]; they're still around, they have nefarious motives and they seem to be having a good time watching what's happening."

Our Darker Purpose focuses on tiny heroine Cordy as she fights her way up the food chain of the bizarre, dystopian Edgewood orphanage. The school's teachers, Administrators, have all but disappeared and the children find themselves at war with one another in a deadly cross of Lord of the Flies and Battle Royale. 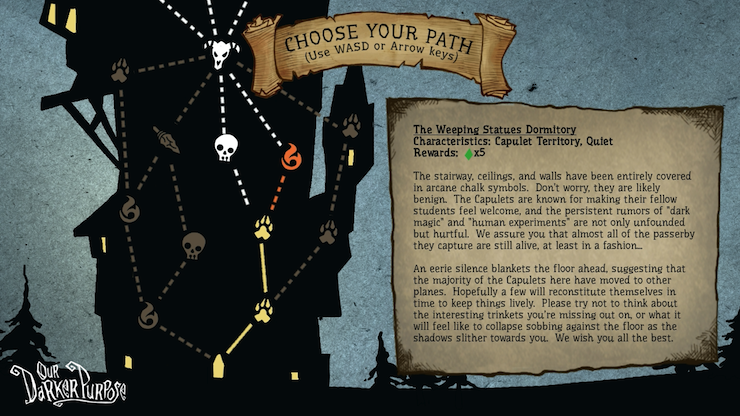 The game borrows RPG elements from the Legend of Zelda games and the dark overtones of The Binding of Isaac. Players can customize their items and take on the building's sinister inhabitants within a map system inspired by FTL: Faster Than Light.

Despite its horror-steeped nature, Roth does not call Our Darker Purpose a survival-horror game.

"The game is dark but it's pretty tongue in cheek," he said. "I'm easily scared and could barely play through some sections of Resident Evil when I was a kid, and even for me it's hard to imagine anyone losing sleep over Our Darker Purpose. That said, again, Edgewood is meant to be a creepy place. Comic gothic."

As players move through the orphanage, they will be rewarded with pieces of its twisted story upon finding specific items or triggering certain events. Some instances and boss battles happen in all playthroughs regardless of the path players take, but some elements will only appear occasionally — such as a rare creature or object. This means one playthrough is not enough to uncover the building's deepest, darkest secrets. 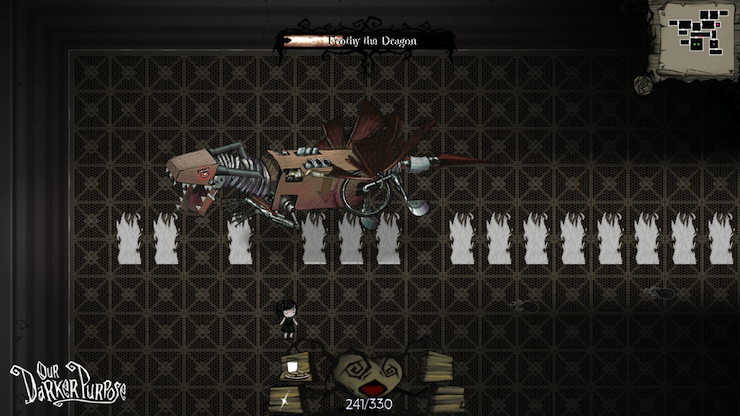 Players will also die frequently. Death is permanent, Roth says, in a sense that it is omnipresent and something you will inevitable have to face — and then restart your game.

"It's quite easy to die, and when you do you have to restart," he explained. "Every level is randomly generated. That said, within each game you can earn credits that can be traded for lessons later from your Guidance Counselor, a skeleton-scarecrow-guy [in the orphanage]. Those let you get permanent upgrades that last forever, and let you tailor more to your style of gameplay -— more speed but less damage, for instance."

Our Darker Purpose originated as a graduate project, and creators Roth and Wil Wu both realized that we really wanted to make a game.

"I'm focused more on the story and vision for the game, Will is focused on gameplay and actually building it," Roth explained. The pair found artist Caitlyn Kurilich later on their search to find a unique, sweet-yet-gothic art style for their game. 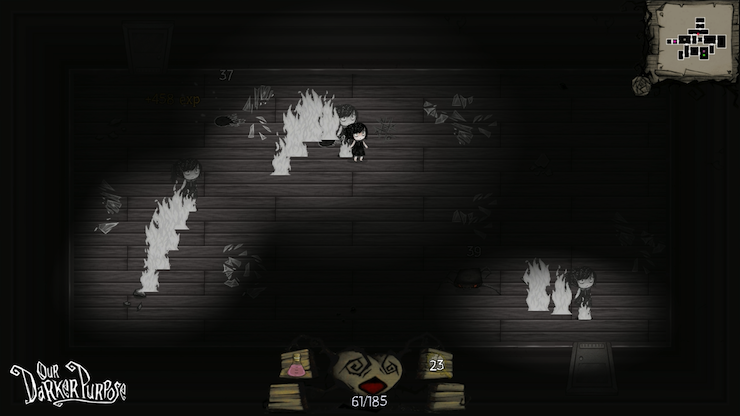 "One thing that sets Caitlyn apart is her ability to create characters that have an emotional vibrancy to them," Roth said. "So when you see a student coming at you holding a globe, he's frightening but he's also sort of vulnerable and endearing. The same thing the tousled hair feral students that chase you through the manor — they're enemies, but they also convey a story of isolation and desperation. That's what we wanted and we're amazed at what she's been able to do here."

"As to the story, we knew that we wanted to do something dark but with a comic element, along the lines of [Tim] Burton or [Edward] Gorey. We loved the idea of taking the general anxieties of being in a school and trying to enhance the danger that comes with that."

Our Darker Purpose is slated to launch for Windows PC should funding via Kickstarter be successful, with Mac and Linux versions coming after.