The works of Twisted Pixel — 'Splosion Man, Comic Jumper, The Gunstringer — have often succeeded on the strength of their charm and the consistent wackiness of each game's premise. That also appears to apply to the developer's debut Xbox One game, LocoCycle, a bizarre motorcycle racing/fighting game hybrid.

LocoCycle was unveiled at last year's E3 as an Xbox 360 game, but after a long silence, it has since made the leap to Microsoft's next-generation console. At this year's E3 we got to play it, this time on Xbox One.

The set up for LocoCycle is that a sentient experimental motorcycle trained in the martial arts named I.R.I.S. has escaped from her manufacturer, Big Arms (which has ties to the 'Splosion Man series), and her mechanic Pablo is dragged along for the ride. Unwittingly, that is, as Pablo's pant leg is trapped in I.R.I.S.'s inner workings. The two work together in aiding the motorcycle's escape, though neither speak the same language — I.R.I.S.'s Spanish-to-English translator is on the fritz.

The Xbox One demo we played at a Microsoft event started off without much combat. We had to steer I.R.I.S. through a canyon from a top-down view, slaloming between the whirling blades of mechanisms trying to destroy us. Later, combat came in the form of I.R.I.S. leaping off the pavement and "kicking" flying armored enemies with her tires. Motorcycle martial arts in LocoCycle isn't unlike the melee combat popularized by Batman: Arkham Asylum; we kicked and punched with I.R.I.S. using a single button, then countered with another button when an on-screen indicator warned of an incoming attack.

The combat isn't particularly complex, but the system challenges players to maintain air-juggling combo chains for as long as possible, indicating there's more to motorcycle kung fu than a 10-minute demo can convey. 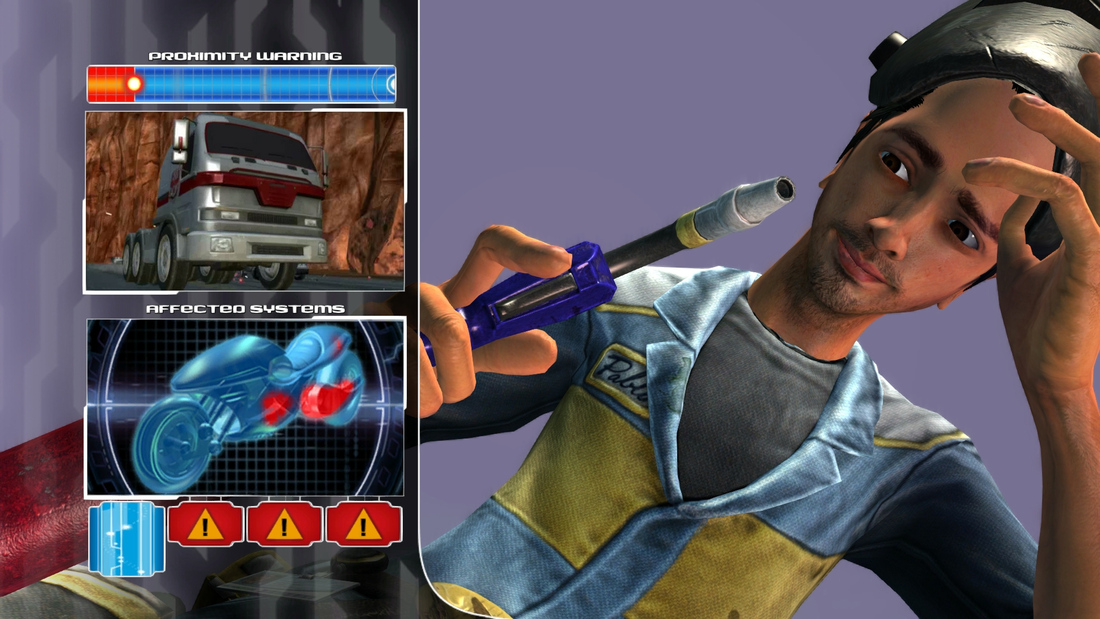 During driving moments, I.R.I.S. has a mounted machine gun she can fire to fire at enemy vehicles and Pablo can occasionally serve as an attacker in quick time events. He'll whack foes with a hefty wrench or send missiles hurtling back at whoever launched them.

Pablo can also be employed in extended quick-time events that behave like a series of puzzles. In one, near the end of our demo, I.R.I.S. broke down. Her mechanical failure caused Pablo great distress, as a semi-truck threatened to run them over if he couldn't repair I.R.I.S. in time. LocoCycle threw four repair mini-games at us, which required movements like rotating the Xbox One controller's analog sticks in a screwing motion and carefully hotwiring the bike with two live wires. The repair process culminating in a frantic jamming of buttons as Pablo kicked the motorcycle back into consciousness.

Playing the game on Xbox One hardware showed a visually improved LocoCycle that ran at a good clip and at high resolution, but it's clear that the game began life on the Xbox 360. LocoCycle plays smoothly, but has some rough-looking edges (which some slick effects and lighting help to mask).

Mechanically, LocoCycle is intriguing. There appears to be a variety of gameplay systems in place that we don't yet feel fully comfortable with, but will help break up any sense of repetition. The game rated me extremely poorly on my performance, indicating that I didn't quite "get" what LocoCycle was doing. But that's often a good measuring stick with Twisted Pixel's games: You either get the joke or you don't.

LocoCycle is planned as a launch game for Xbox One. The Xbox Live Arcade version for Microsoft's current-gen console is still in development, with a launch date to be determined.