Thank PlayStation C.A.M.P. for some of PlayStation's most interesting and offbeat titles. The program has spawned creative video game works like echochrome, Tokyo Jungle and the upcoming invisible adventure Rain. It's also spawned Open Me!, a unique augmented reality puzzle game coming to PlayStation Vita later this year in North America.

Open Me! for PlayStation Vita didn't garner much attention at Sony's E3 booth this year, but we became enamored with the quirky multiplayer puzzle game after stumbling into it at last year's Tokyo Game Show (where it was known as Box! Open Me). The premise is simple — you open a series of puzzle boxes — but its use of the PS Vita's camera, gyroscope and touchscreen makes for a dazzling experience. Open Me! functions when players point the Vita's camera at an AR marker on a flat surface. A puzzle box is rendered onscreen, resting on that surface, which players can interact with by tapping the Vita's touchscreen.

One of the earliest puzzle boxes is a simple wooden crate. Two players must cooperate to open up that box, pressing down on each side of the box to stop a pair of clamps from locking the box shut. Once that's accomplished, one player must hold back the lid, while the other reaches in. Reach into the box solo, and it will slam down hard on your virtual fingers.

Later boxes feature more elaborate security systems, with passcodes, laser beam sensors and video cameras that monitor your box-opening efforts. Players will have to break into cash registers and more abstract puzzle cubes that look nothing like metal or wooden crates. Here's a demo from TGS 2012 that might help explain Open Me!'s AR puzzle system.

The wooden crate box, which functions not unlike a mimic (a monster disguised as a treasure chest) was the first puzzle that game director Taro Matsuda prototyped. It was the demo that convinced the people at PlayStation C.A.M.P. and Sony Computer Entertainment to greenlight Open Me!

Matsuda, who had previously worked on PlayStation Network puzzle game Trash Panic, says his company Jetray Logic was tasked with creating something unique that capitalized on the Vita's hardware.

"A lot of the executives couldn't quite understand it at first," Matsuda said through a translator, Open Me! producer Dais Kawaguchi. After playing with the wooden crate, Matsuda said they started to get his game and "realized that this was the type of game that only C.A.M.P. could create."

C.A.M.P. stands for Creator Audition Mash-up Project, says associate producer Aoi Igarashi. His team at Sony Japan Studio works with small teams at PlayStation C.A.M.P. to bring in outside creative talent, whether that be from fields like the fashion or automotive industry, to get a fresh perspective on game design ideas.

Prior to a career in game development, Matsuda says he worked for the Japanese government in the postal service. He says he tries to focus on four key design rules when making games: it has to include something common in the real world (trash disposal, opening boxes); the user interface must be simple; it must include "something new"; and his father must be able to play it.

On that last point, Matsuda says he was mostly successful. Although his dad has finished all of Open Me!'s puzzles, he's made it more than halfway through. Good enough. 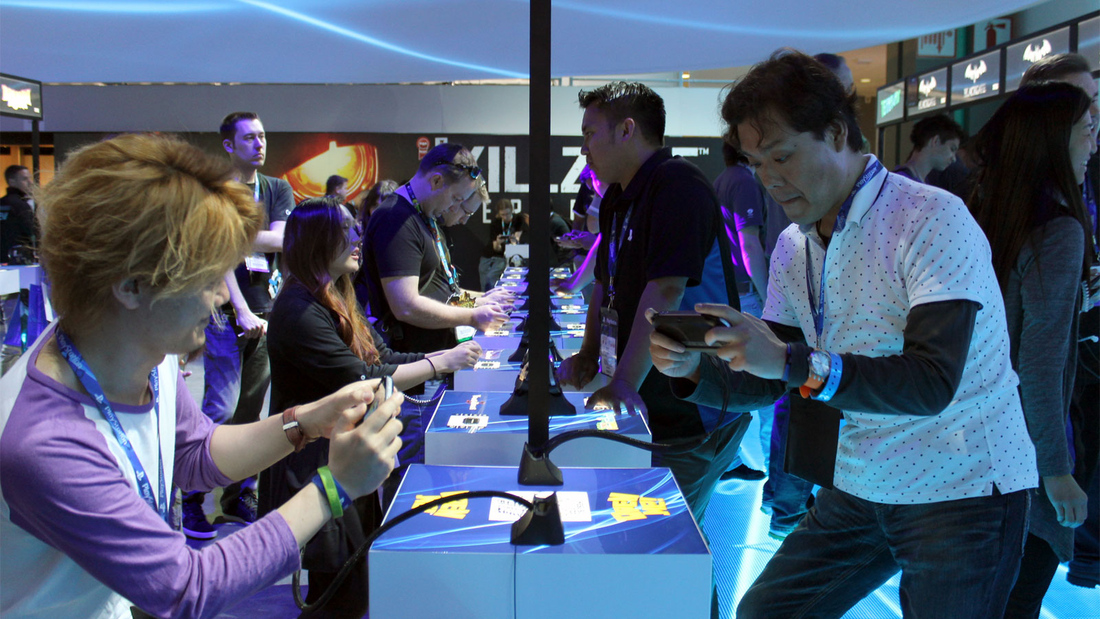 Open Me! has already been released in Japan and the PlayStation C.A.M.P. team has supported the game with free downloadable content. Two themed boxes, one based on Tokyo Jungle and another on Soul Sacrifice, have boosted interest in the game, Matsuda says. He tells Polygon that downloadable games have less prominence in Japan than they do in North America and Europe, but that digitally distributed games are growing back home.

Matsuda isn't sure if the flow of free, downloadable add-ons for Open Me! will continue — some of that is up to the game's reception in the West — but that he'd like to work on more boxes. One based on the recently unveiled PlayStation 4's design, he said.

He remarked that players of Open Me! exhibit a sense of surprise and laugh as they play the game, unlocking its secrets. In two-player mode, Open Me! players often get loud and communicative with each other, he said, one of Matsuda's expectations for the unique puzzle game.

Matsuda attempted to explain his next project, a video game about time existing in two different forms on either side of a wall, but the details got lost in translation. Given how Matsuda and team can turn trash compacting and box opening into delightfully unique games fostered by PlayStation C.A.M.P., its an idea worth watching out for.