First look at Star Citizen's 'BMW' spaceship, the 300i

Share All sharing options for: First look at Star Citizen's 'BMW' spaceship, the 300i

The roll-out of a gleaming new space-craft in Chris Roberts' Star Citizen world has taken on the quality of an old-fashioned Detroit unveiling of a new Chrysler or Chevrolet. For these are video gaming's shiny objects of desire, their beautiful entities. Curiously, they are also feats of engineering.

Chris Roberts is today showing off the 300i for the first time, along with a slick promotional in-engine video and an online brochure (see bottom of story) that is just as glossy as anything you'd expect to browse, while eating a tasty donut, in a BMW dealership.

Star Citizen, in case you are not aware, is Roberts' immense space trading, combat and exploration game from Roberts Space Industries. Like his classic Wing Commander series, it encourages players to the pursuit of power and prestige through the ownership of a kick-ass ride.

The blurb is deliciously seductive. "The all-new 300 Series is the manifestation of feeling. It is the thrill of T5 engines pushing out of an atmosphere. It is exhilaration as you weave through an asteroid field. It is when flight controls become more than mechanisms, they become a part of you."

A few months ago, Roberts unveiled the base-level Aurora, a functional, appealing but mostly unglamorous craft. It was, said Roberts, "the Ford Escort" of his universe.

The 300i is a different beast. It is a "BMW 3 or 5 series", according to Roberts. "It looks cool and it performs well, though it might be slightly over-priced for what you get," he said.

Like all the craft in Star Citizen, the 300i is not merely a fantastical creation, born of excitable designers who have avidly watched too much Battlestar Galactica. The ships must function as they would in real, three dimensions.

"The way we make these is a lot more high fidelity compared to other games," said lead vehicle artist Chris Smith. "It requires a different building technique. We have a lot of parts that are moving. The interior cockpit is so detailed. We want to convey a simulator type feel to it. It's based on reality. You have everything that you would need to fly, trade, fight." 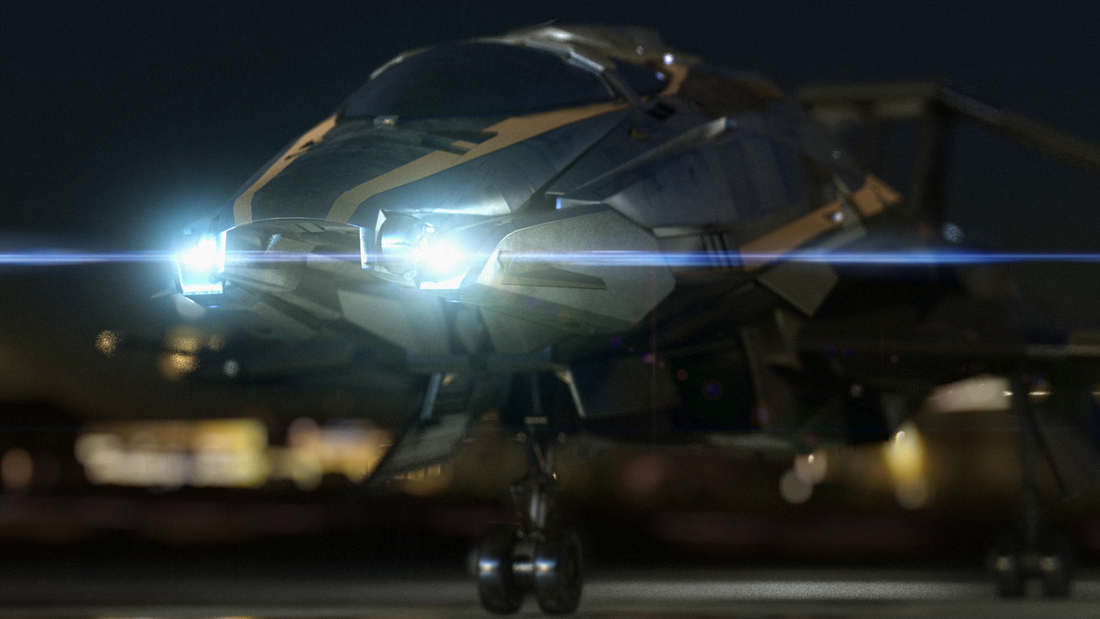 Players don't just magically teleport from the exterior of the ship to its cockpit, restricted to a head-swiveling HUD combat window. They step around the ship, its cargo areas, its sleeping quarters, its weapons pods.

"We make sure the landing gear retracts to a proper place," said Roberts. "It's cool that the amount of detail we build into these ships is like industrial design. We design and account for all the stuff that you would normally cheat with. We think in terms of all the pieces. We are almost mimicking what happens in the real world, all the functions and the design iterations."

The special quality of Star Citizen is not merely the galactic grandiosity of its in-game ambitions, but its aggressive drive to exist, here on 21st Century Earth. Star Citizen is the crowdfunding behemoth, raising $10 million so far from dedicated fans.

Roberts' model for this success is serrated-edged capitalism. It's interesting that, when talking about the brochure, he references Don Draper, for while the 300i lives in science-fiction fantasy, it also resides in the fantasy realm of consumerism. To inspect the 300i, is to desire it.

These ships are created in order to tempt new devotees into the Star Citizen world, long before the game is actually launched. You, the consumer, are invited to invest in the game, now. And if you choose to invest at a certain level, your trinket is not some gurning figurine or mock-archaic cloth map, but a beautiful 300i, or some other space-age vehicle, designed perfectly for your in-game needs.

It's cool that the amount of detail we build into these ships is like industrial design.

"If I wanted a blend of a ship that could hold some cargo and do some dogfighting the 300i is good for that," said Roberts. "The Aurora is the bare bone ship. Then you have a Hornet for dogfighting, but it's not great for cargo because it doesn't really have any hold. Then there is the Freelancer which is like a truck which is great for cargo but not great for dogfighting. So if you want a blend the 300i is the best bet of the basic ships that we have in the game at the start."

In Star Citizen's fiction, the 300i is made by a German corporation called Origin Jumpworks GmbH. The double allusion is to Roberts' old employer Origin Systems (which made good products) and to the great German car-makers. Even if you do not exactly love German cars, you must respect the integrity of their design, the finesse of their appeal among the affluent and aspirational. 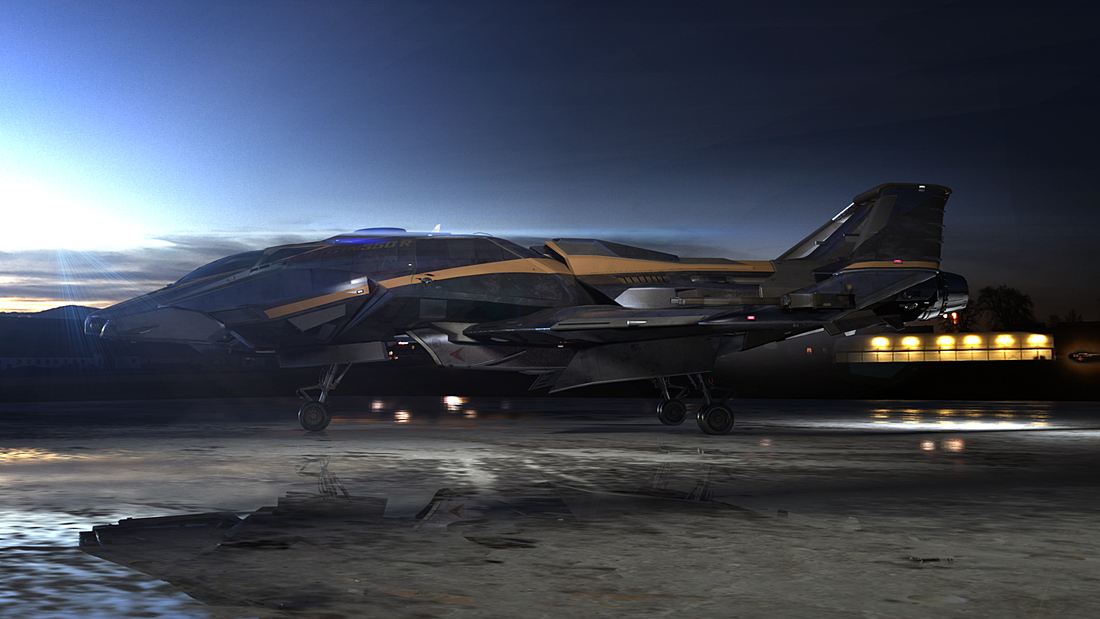 Many of the most successful Kickstarters of the past year have traded on the reputations of their instigators. In this regard, Roberts joins the likes of Tim Schafer and Brian Fargo, people who have made bloody good games in the past and so ought to be trusted to do the same again.

But nostalgia has a limited shelf-life; the past's consumer base is ever-dwindling.

The future is where the money is at. It is the place of unlimited aspirations, heady realizations of you: powerful, prestigious, surfing super novas.

This is Chris Roberts as Don Draper. It is not enough to create a fantasy, he must sell it too, shape it into a message. When Star Citizen asks you to invest in its future, it seeks to sell you your own dreams.

Because as you caress and peruse the 300i, you want it. The blurb says it is a "sleek, silver killer that sends as much of a message with its silhouette as it does with its particle cannons." It offers a single TR4 and 12 TR1 Thrusters, as well as two Class 1 A&R Omnisky III Laser Cannons, equipped. But that's just the beginning. Upgrades are on offer for faster, more powerful, or more roomy versions.

It goes on, relentlessly. "Every component, from the laser bypass core connector to the cockpit auto-latch vacuum seal system, has its own storied design team and has been rigorously examined for ergonomic superiority and stress-tested to within one-micron tolerance. We're dedicated to making sure your spacecraft feels like an extension of your body; pick up a 300 Series flight yoke to find out what you've been missing."

Driving a basic Honda will do the job just as well as a Ferrari.

This is the cleverness at the heart of Star Citizen. It invites you to inhabit an incredible, exciting world of space exploration, empire-building and multi-axis dogfighting, and then it asks you how incredible you would like to be, within that world.

Roberts is not a monster. The gamer within him has more sway than the ad-man or even the industrial designer. You can have the 300i, if you are prepared to work for it. Nothing is sold in Star Citizen that cannot be earned. Not only that, but all spaceships, ultimately, get the player from A to B. Players can get by with just an Aurora, if they wish. Everything else is a personal choice.

"Driving a basic Honda will do the job just as well as a Ferrari," said Roberts. "The Ferrari might be a lot more fun and look cooler but it still achieves the same goal.

"There's no ship that's like a 90-level character that's always going to kill a 7-level character," said Roberts. "There's always an element of skill. The ships are very rock-paper-scissors. There's a lot of customization and there's always trade-offs. Is my ship set up for combat or trading or long range scanners for exploration? So there are trades and balances. It's up to the players to choose their play style and how they want to configure it."

Roberts is very clear that flashy introductions of new spacecraft are marketing exercises, designed to attract new subscribers to the Star Citizen world. They are also rewards, to those who have already offered up their cash, perhaps based only on the 300i specs and who deserve to be given the chance to run their loving hands, figuratively, down the alluring bodywork.

But he and his team are also committed to making a fictional world beyond our world, an escape that feels real. The designs of spacecraft is an essential element in that fantasy.

"The idea is to speak to the broadest population possible," said chief visual officer Chris Olivia. "Whether you spend a lot of money or a bit, you will have something that you can purchase and that you'll enjoy. Regardless of the level of style and quality we give it the same amount of attention, the feel that it's a lot of care given to it."