It was the summer of 2007. Over milkshakes and hamburgers, Jeff Strain was sold on an idea that would eventually evolve into State of Decay.

Strain was still at ArenaNet, working on content for Guild Wars at the studio he helped start. A group of colleagues, including artist Brant Fitzgerald and art director Doug Williams, had tempted him to lunch with what would ultimately be a tempting idea: a massively multiplayer online-style game set during the zombie apocalypse.

"At the time, Guild Wars was running very successfully, and we had our hands full supporting the community and laying down plans for future content," Strain told Polygon. "I told them, 'I think it's a phenomenal idea,' and I personally am a huge fan of the genre. We could make it a really powerful game experience, and it would be fundamentally different from [MMOs using] the standard leveling-up mechanics. But it wasn't something the company was able to take on at the time."

So Strain and his colleagues decided to make a company that could.

"We built a studio around the idea of State of Decay."

In 2009, Strain left ArenaNet to set up Undead Labs, a studio built on the foundation of their zombie apocalypse MMO idea. Fitzgerald and Williams, along with a handful of others, joined Strain in 2010, driven by their juicy idea. In Strain's words, the studio could not exist without a strong game concept driving it, a "firm template for all the high-calibur talent" to rally behind. And so, they picked a name that would embody their commitment to the relentless pursuit of their dream game: Undead Labs.

"If you're creating a game studio, or really any business, where you don't know what you're going to be doing five, 10, 15 years from now," he said, "you have to come up with a name that isn't genre-specific, or that locks you into a particular business model. I think it's very important to send a message to everyone who's a potential player of your game that you're serious about it, that you get it, that you're not just cashing in on what's popular." 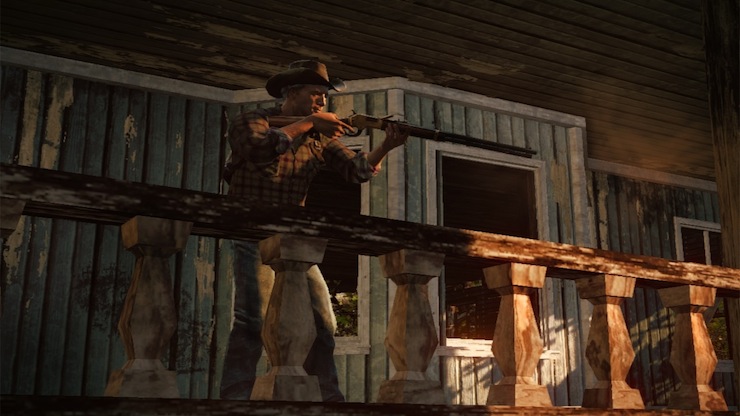 At the time the film Zombieland had just come out, and a wave of zombie-slashing media had washed over the entertainment business. Max Brooks' novel World War Z and other zombie survival guides were flying off shelves, The Walking Dead comic books were gaining traction and a zombie fascination had overtaken popular culture.

"It all really informed our thinking about what we could do to create a game that really channeled that survival experience," Strain said. "It could be an incredibly powerful game, something new under the sun.

"But also we looked at existing games in the zombie genre, and there are some fantastic ones, but it didn't feel like anyone had captured the essence of what made the genre popular — a focus on survival rather than a focus on killing zombies," he added.

Despite the flood of zombie-centric media, Strain and his team were undeterred in pitching their own contribution to the genre.

"Anybody who goes out there right now and announces a new zombie game is going to get eyerolls, because it is very popular right now," Strain said. "For many, many years the same was true about fantasy. If you had a game with dragons and elves in it, people rolled their eyes." 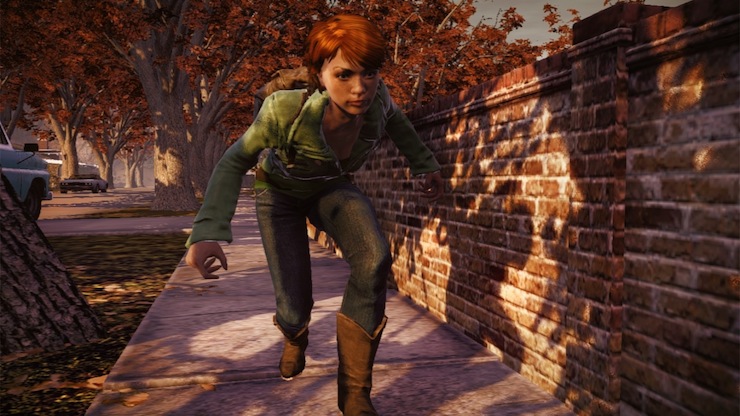 Strain believes that what inherently makes the zombie genre interesting in not the ability to freely hack up the undead in buckets of blood. It's the human element, the way other people act in the face of atrocity and hopelessness, that draws people to it.

"A real zombie experience is not about killing zombies," he said. "You can't take a miltiary shooter and redress it with zombies and call it a zombie game. You're not Rambo with a big gun getting points for how many zombies you can mow down; you're making decisions about how you survive, manage resources, interact with other survivors. It's the moral decisions you make.

"It's that particular aspect, the most endearing, the most powerful part of the genre, that we set our sights squarely on hitting with State of Decay."

Strain said that while the State of Decay experience available to players today is largely the experience Undead Labs had in mind from day one, some bits and ideas had to be scrapped along the way. The most heartbreaking feature to let go of, he said, something the team mourns to this day, was the game's cooperative multiplayer. 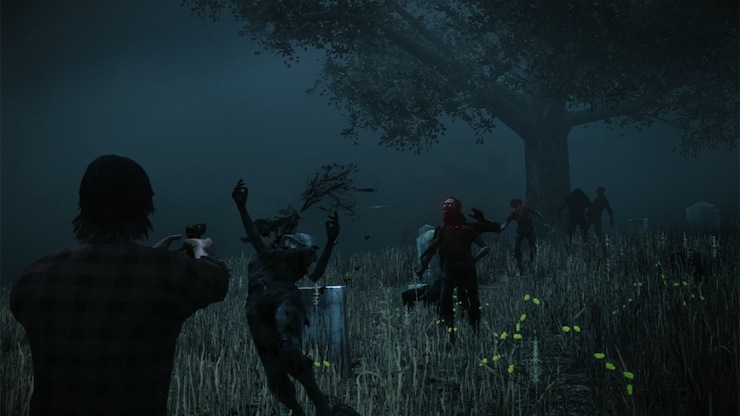 "We're still bleeding over it," Strain said, stating the feature was cut due to technical and budget reasons about a year before State of Decay's planned launch.

This multiplayer mode would have included sandbox-type and real-time strategy missions, events not tied to the main storyline but ones that Strain suggests would have added extra depth to the game's survival aspect

Despite some small studios reporting difficulties while working with Microsoft Studios, Strain said Undead Labs' experience publishing through the company has been smooth sailing. 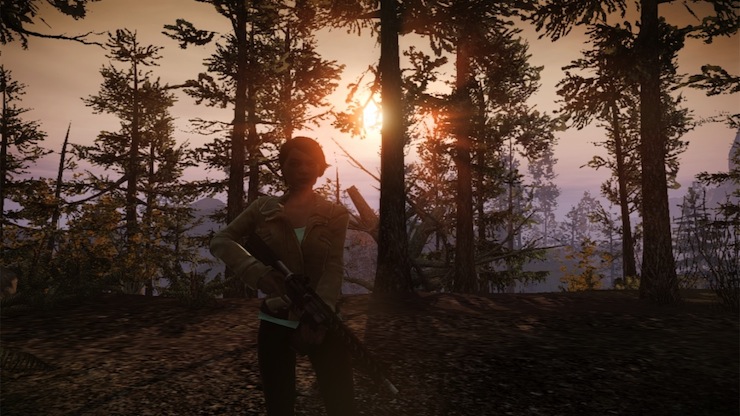 "Microsoft, to their great credit, was infected by our vision," he explained of Microsoft's reception to their initial pitch for State of Decay. "I understand there is some frustration out there about Microsoft [Studios], and in particular their support of indie developers. They took a chance on this game: it steps well outside of the traditional console experience, and it's not a safe game to bet on."

Strain said the studio "talked to everyone," including Sony, when shopping for a publisher for State of Decay. They ultimately went with launching on Xbox Live Arcade because the distribution platform was "a perfect fit" for what Undead Labs wanted to eventually do with their game, and because of a sense of genuine excitement and investment on Microsoft's part.

"We talked to [many different publishers], and we thought: is this going to be just another portfolio piece they tentatively get behind?" Strain said. "When we looked at all the business factors and publisher-developer relationship we would have, we felt Microsoft was the best choice."

Strain added that last spring, Undead Labs approached Microsoft about publishing a Windows PC version of State of Decay through Steam. He said Microsoft was immediately receptive to the idea, as Valve's platform could help ensure the game reached a wider audience.

"There was no hand-wringing, and almost no debate," he said. "They were just as motivated to get the game out there as widely as possible as we were." 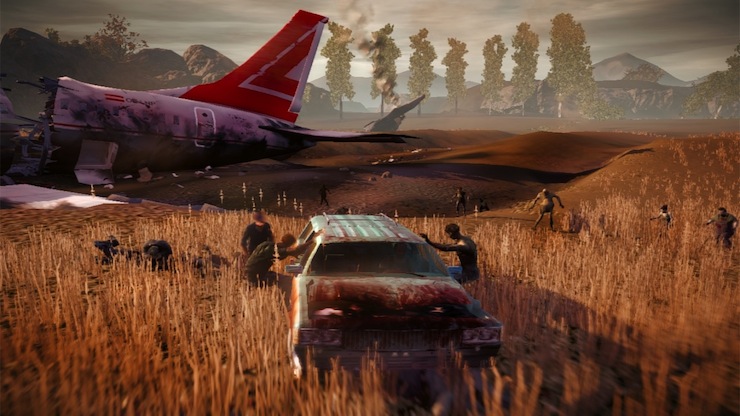 Undead Labs' next step for State of Decay is the addition of a "pure survival" sandbox mode, in which players will be able to explore the world on their own time.

"The game is basically a giant simulation of zombies versus humans," Strain explained. "The narrative we tell gives you some context and drives you through the experience, and there is a beginning, middle and end. I think people take between 15 and 25 hours to play the entire game, and we found that after that, players are immediately restarting.

"Every playthrough is different, but the story is the same every time. After they finish they want to just experience the game in pure sandbox mode and be able to focus on experiencing the world and not worry about completing the story. We're going to make that happen."

The "pure survival" mode will test how long players can survive, giving them freedom to roam the world and complete tasks as they will. The world simulation will continue to run, driven by how players choose to spend their time. The new mode will also feature new tools that will measure and rate players' progress, including how long certain characters are kept alive and how effective players are at gathering supplies and maintaining community health. Strain calls is a "SimCity-style simulation," and it will be released as downloadable content sometime in the future. Whether or not it will be paid DLC is Microsoft's call.

Strain also provided more information on the rumored in-development Class4, a follow up of sorts to State of Decay. He clarified that Class4 will be a "shared virtual world" in which Undead Labs hopes to cultivate an experience similar to that of State of Decay, and it will be a true sequel to the title. However, Class4 is not in development and currently exists only as a concept.

"We didn't know what to expect."

"[Class4] is what I would say is a future discussion, we're very much focused on State of Decay right now," Strain said.

As for whether or not we'll see State of Decay on Xbox One, Strain was vague about Undead Labs' plans for the title but stated that any future sequels would likely come to the next-gen console.

"If we do a full sequel to the game, it wouldn't be on currently existing hardware," he said. "We don't know what the future of State of Decay is right now, the IP, the franchise... Clearly if there's a full sequel, it would be on Xbox One. But I can't comment beyond that."

Community reception to State of Decay has been humbling for Undead Labs, Strain said, and has inspired the team to push their limits creating an even more immersive survival experience for their audience.

"We didn't know what to expect," Strain said of the game becoming the fastest-selling original XBLA game ever. "We're incredibly proud of what we've made. Obviously if we had more resources, you know, then we would have loved for State of Decay to have been an even more polished experience, but we felt gameplay was something new and original and it seems that [our audience] agrees.

"It's been unbelievably gratifying. We're in awe."