Deadpool gives voice to the merc with the mouth.

Deadpool is the ultimate man-baby.

High Moon Studios' first title set in the Marvel comic book universe is littered with poop jokes, bouncing breasts and famous X-Men appearances. Combined with the crass super-human's on-screen predilection to hear voices that aren't there which correspond to the id-ego-super-ego paradigm, the developer has captured the puerile spirit of the character.

But High Moon has also built a responsive action game around the idiot anti-hero, with a mix of melee and gunplay and a hodgepodge of other one-off sequences thrown in for good measure. Deadpool never sits still for a moment, and that's a very good thing.

Things start in Deadpool's apartment, as the masked man receives a phone call from video game mega-publisher Activision about making his game idea a reality. That'll be the fourth wall crashing down around your ears, where it remains for the entirety of the adventure. After assuming brief control of Deadpool himself, at which time you can enjoy such activities as defecating, inflating a blow-up doll and surfing the "interwebs," you soon get a special delivery at your door — the game script. From here, the plot serves as one giant excuse to eviscerate video game conventions.

Deadpool is a competent third-person arcade-style action game. You spend much of your time in High Moon's expansive levels cracking skulls in both combo-based melee combat and twitchy gunplay. These aren't discrete states — Deadpool is a master of blades and firearms, and you can choose to go guns blazing (or katana-chopping) into any situation. It's simple, but effective. Cornered by a bunch of melee-happy goons? Smash them up and let a few bullets fly at close range. Are dudes shooting you from the other side of the room? Flush them out with a grenade and shoot the rest.

Even when rushed by mobs of bad guys, I always felt empowered, but the mechanics can be repetitive. There are plenty of different enemy types that require slightly different tactics, but for the most part, you are slashing or shooting. An upgrade system alleviates some of the boredom, allowing you to trade in "Deadpool Points" for weapons and abilities. But new toys can't fix a fundamentally shallow system. In the "challenge" mode — basically, wave-based survival stages set in various environments from the story — there's nothing to do but juggle enemy types and loot ammo. This gets old quickly.

In the campaign, this isn't much of a problem, since you never have time to get bored. 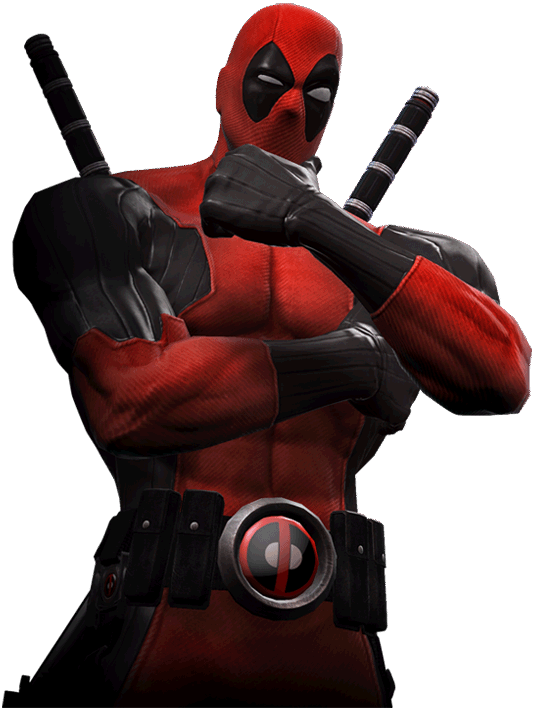 Deadpool's campaign succeeds through variety. I slid through sewer mazes, rode runaway mine carts, manned giant railguns with infinite ammo, platformed atop bits of debris in a tornado, survived an evil carnival boat ride and solved a bunch of bizarre puzzles involving giant robot arms. There are even sections of the game where the "budget" was cut, so you'll run around top-down 2D arenas and sidescroller stages with retro graphics. High Moon took Deadpool's inability to pay attention to anything for long and ran with it as a game design philosophy. 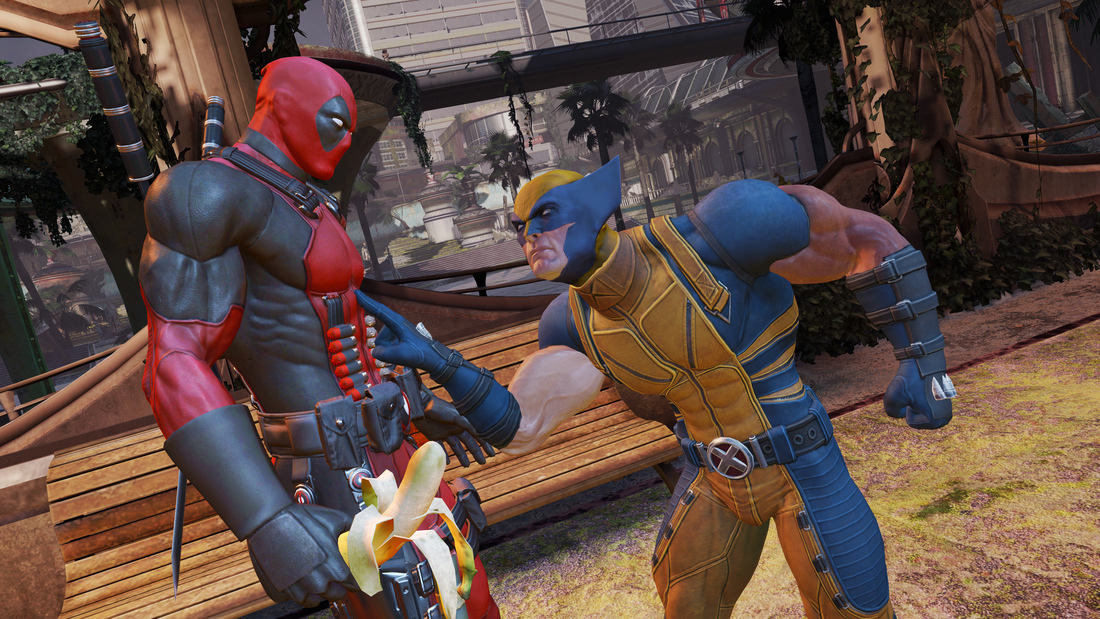 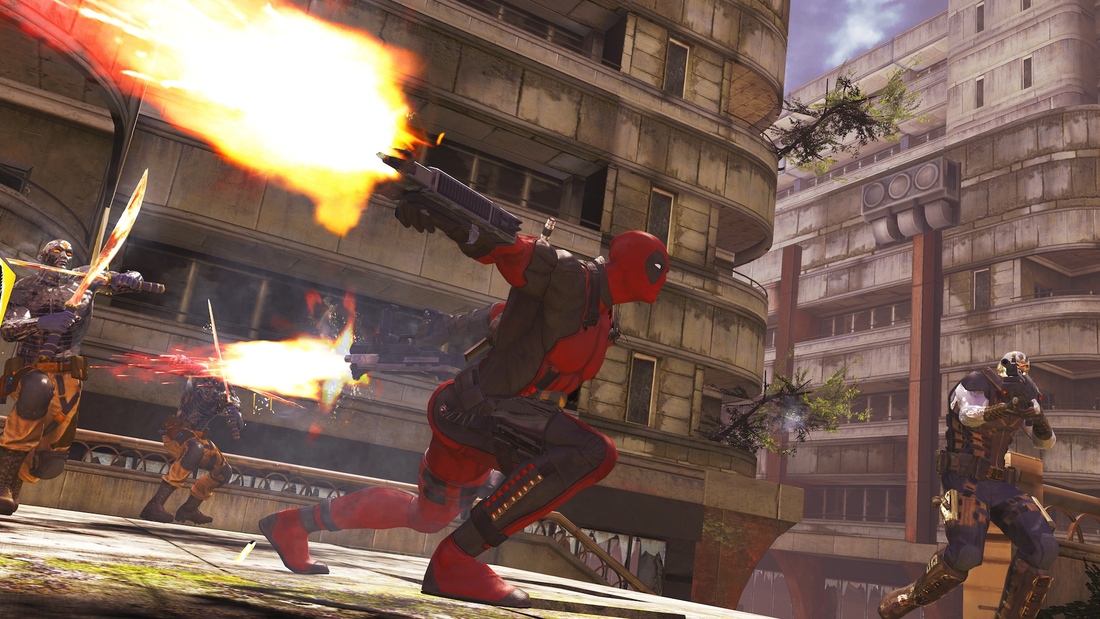 I encountered aggravating bugs during my playthrough of Deadpool that slowed my progression to a halt more than once. I had to replay the first section of the game twice thanks to a glitch that kept me from facing a boss character. I reloaded from checkpoints at other points in the game because an enemy who fell off of the level geometry wasn't counted as a "kill," which failed to trigger the next section of the game. I lost count of how many times I died because I was caught on a piece of level geometry at an unfortunate moment and got pummeled to death. They didn't ruin my experience, but Deadpool's glitches are a pain.

The ADHD level design is supported by some better-than-average writing and voice acting. The plot moves fast and works well as goofy, self-aware satire. The creative team has nailed the character — his juvenile antics, inner demons and dire tragic-comic outlook on life (and death). But there are inherent problems with a character whose immaturity is a selling point.

Never is this more apparent than in Deadpool's "appreciation" of the female form. There are a whole lot of virtual breasts in Deadpool, and Deadpool loves them. He loves talking about them, touching them and staring at them when a woman is talking to him. A bit more disturbingly, one of the very first shots in the intro has Deadpool literally shooting a framed portrait of a woman while he listens to a voicemail rejecting him.

But the game interestingly seems to know how tiring this objectification is, and High Moon paints the lead character as something of a doofus. When he hits on women, they groan and rebuff him (or turn out to be imaginary). Often, they slap him across the face. He's presented as kind of a loser. This made the character more palatable for me.

Deadpool does right by its bizarre hero

The early-game blow-up doll left me with low expectations for Deadpool. But High Moon surprised me with competent action and better-than average storytelling, and even Deadpool himself grew on me, despite his dumber-than-dirt antics. Amid some aggravating glitches, sometimes-repetitive mechanics and an unwelcome late-game difficulty spike, the game isn't really superhero material. But like its protagonist, Deadpool is faithful to itself, which counts for a lot.

Deadpool was reviewed using a retail copy provided by the publisher. You can find additional information about Polygon's ethics policy here.