Don't Starve is a survival sim that gets under your skin. It's like an endurance sport, such as running or cycling — opaque, introspective and eventually, powerfully addictive.

As with those athletic pursuits, there's a difficult learning curve. Your motivation to participate has to come from within rather than from without, as the rewards are intangible: you progress, get better, last longer. But for the right kind of player — someone who actively likes to compete against him or herself — Klei Entertainment's game is like a drug.

Don't Starve puts you in the shoes of Wilson — a gentleman scientist (though you can also opt for another of the game's unlockable Edward Gorey-inspired characters, all with their own unique attributes). You wake up in the wilderness, with the cheeky instruction that you'd better find food before nightfall. That's all you get by means of explanation: Both character and player are left alone to figure out the tricky landscape.

You click around the randomly generated scenery, collecting items and raw materials — which you'll turn into more sophisticated tools and gear necessary to survive. Each day is divided into daytime, dusk and night — and you need to create a light source to survive in the dark. You also have to avoid dangerous critters (or craft the right equipment to fight them successfully), forage or hunt for food, and make sure your character's hunger, health and sanity meters are in check at all times.

Crafting is a primary part of the game. It starts very simply — you'll pick up items in the landscape to construct simple tools, necessary to break down more raw materials. The system expands all the way from grass and twigs up to goofy scientific machinery, complex farms and magical devices. The tech tree has enormous depth and room for experimentation, all dependent on your priorities. You can play as a lone wolf, setting up camp here and there to research new crafting recipes and otherwise prey on everything that moves. Or you can favor the farming and foraging side, becoming a steward of the land. Successful players need to dabble in both sides — but Don't Starve allows you to find your own way. 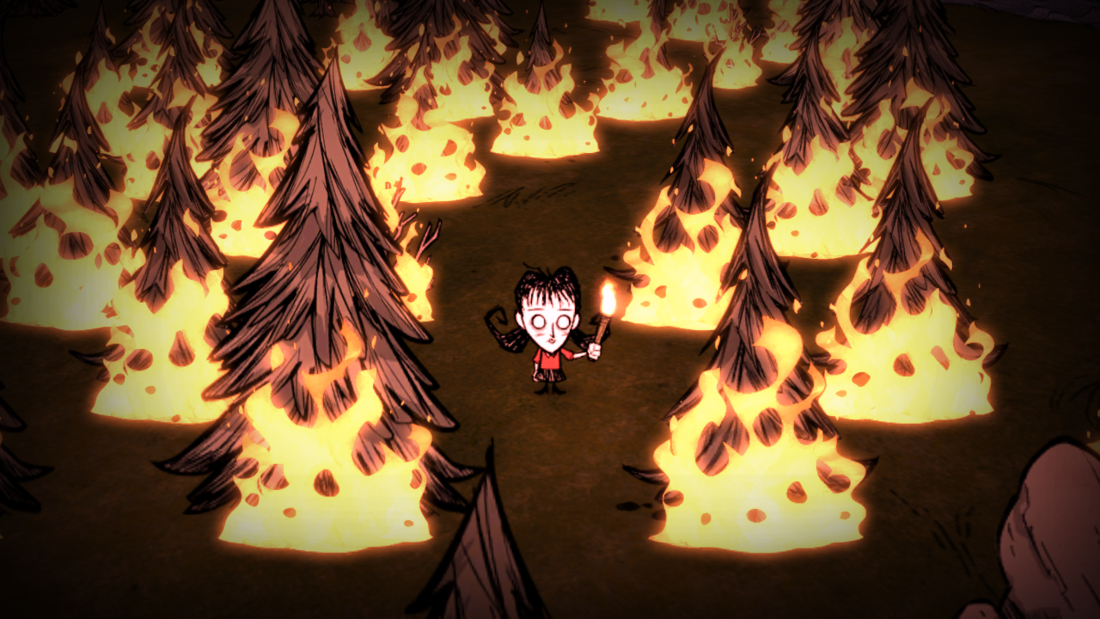 Don't Starve is constantly evolving. Klei has consistently updated the game with new content, adding unique features and terrain to explore. Caves came onto the scene recently, offering a completely new environment type full of spooky bunnymen, weird glowing plants and plenty of new ways to die. The team's dedication to keeping Don't Starve fresh is commendable — and promising for the future of the game. 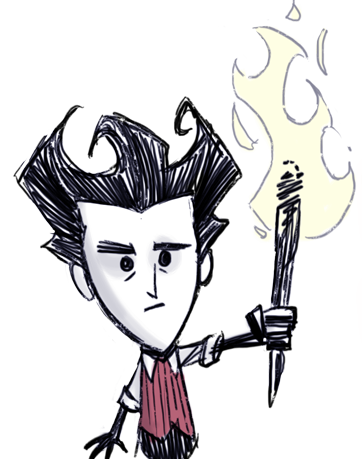 Don't Starve's genius lies in the intricacies of its systems and how well they're balanced. Not only do you need to suss out how best to live with the land; but you also need to interact with the various animals and monsters around you. Some are antagonistic by nature, but lend necessary resources — such as the spiders, which spawn silk and precious spider glands, required for making medicine. Others are more complicated, with moods determined by timed cycles — like "beefalos" and the anthropomorphic pigs that you can hire to be your bodyguards and goons. As with every element in the game, there are ways to get the most from them, and ways to get screwed by them.

There's a silly — but importantly consistent — internal logic to Don't Starve, which becomes clear through continued play. This big, weird world begins to shift into focus once you start sensing the rhythms of its flora and fauna, but until then, the game has a steep learning curve.

I died countless times by the jaws of a hell bent hound until I figured out that I could use other animals to fend them off. I constantly forgot to stock fire-making supplies when I was busy exploring, leading to a several untimely demises. Once, I even died by standing too close to a fire. Don't Starve is uncompromising — it's about survival, after all. Klei made the strong choice not to hold players' hands. 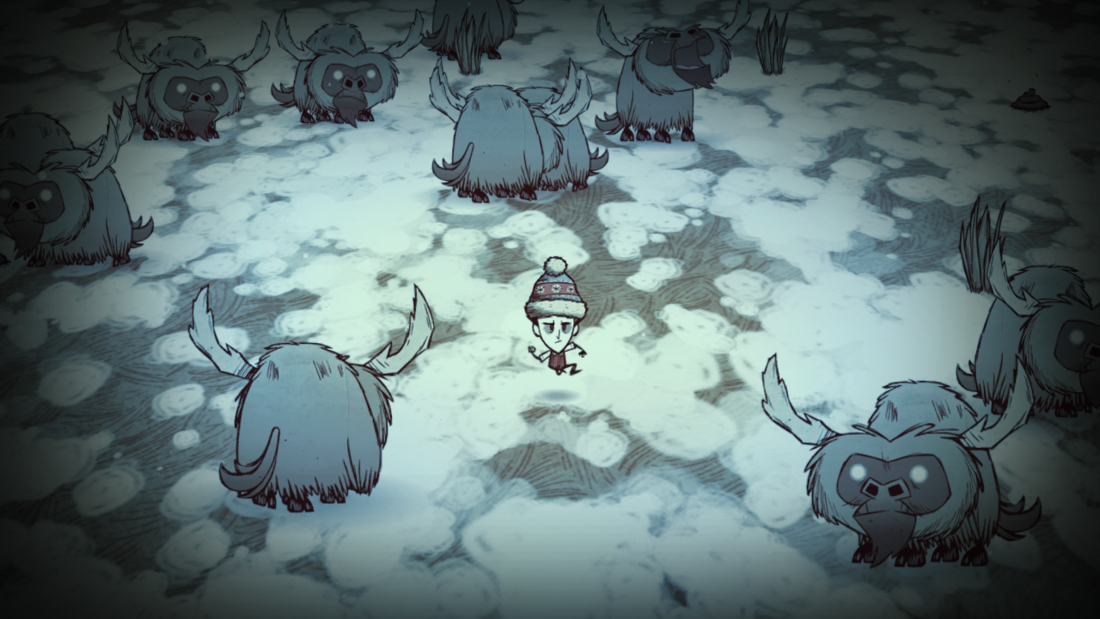 This works so well because the game incentivizes repeated attempts, no matter how pathetic your initial survival skills. I was constantly earning XP through every session, and dying was seldom frustrating because there are no real win or lose conditions. This is emboldening — I wanted to celebrate once I triumphed over a marauding group of spiders for the first time. That feeling was doubled the first time I made it to the winter season. There's satisfaction in mastering Don't Starve's mechanics — the feeling that you've figured out an intricate, unforgiving system and made it work for you. Every death, no matter how stupid, cemented my resolve to do better the next time.

Don't Starve is a refreshingly upfront experience, right down to the title. A game that shoves players into a complex, harsh world with little explanation, it can be tough to parse at first. But little by little, Don't Starve reveals itself via deep mechanics and an ever-evolving world. It started strong and got better, all the way until Wilson's (and my own) eventual mastery of the fantastical wilderness.