The 1,120-page Legendary Edition Guide for The Elder Scrolls 5: Skyrim is "the book I'm going to be buried with," according to its lead author, professional guide writer David Hodgson.

Hodgson spent the past two years working on three different versions of Skyrim strategy guides for Prima: the original one, which spanned 656 pages; the 864-page Revised and Expanded Edition; and now the Legendary Edition. It's a staggering tome that serves as the complete reference for all official Bethesda-produced content in Skyrim and its three downloadable expansions, Dawnguard, Hearthfire and Dragonborn.

Prima had to leave additional space at the inner edges of each page, because the length "tested the limits of what an actual binding can take," said Hodgson. The Legendary Edition's updates include all Dragonborn-related content and a new, more readable body font.

"You're essentially getting the Legendary version of the game in book form," said Hodgson. 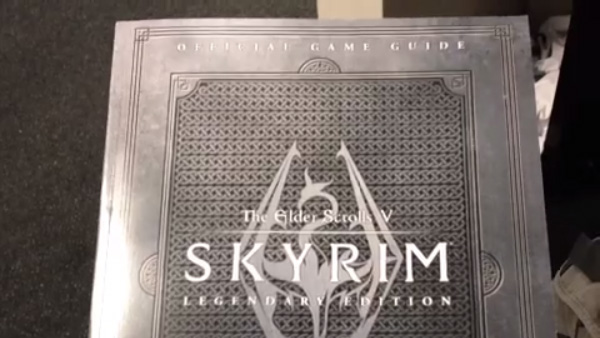 As for the process itself, Hodgson said it was "initially panic-inducing." He received the first build of Skyrim on May 10, 2011, six months before the full game was released, and four weeks into the process he realized he'd only figured out where 10 percent of the game's content was located on the map. Quest information was verified with each individual quest's designer, and Hodgson collaborated with co-author Steve Cornett, a level designer at Bethesda Game Studio, for battle strategies, background information and much more. Hodgson's other co-author, Steve Stratton, handled the Atlas information for almost all the game's Holds.

The Standard Edition of the Legendary Edition Guide, which comes with a two-sided map, costs $29.99. The Collector's Edition also includes a 24-inch poster with signatures from the developers, hardcover binding and ribbon bookmarks; it costs $49.99. Both will be available June 4, alongside the Legendary Edition of Skyrim. You can check out a Vine of Bethesda flipping through the guide's Standard Edition below.