South Park: The Stick of Truth summons the magic of farts

Share All sharing options for: South Park: The Stick of Truth summons the magic of farts

The transition of Obsidian Entertainment's South Park: The Stick of Truth from failed publisher THQ to its new home at Ubisoft appears to be going smoothly. The side-scrolling role-playing game starring the foul-mouthed kids of South Park is just as crudely hilarious and designed to offend those who find scatalogical jokes distasteful as ever.

At a recent hands-off demonstration of The Stick of Truth, Obsidian played through a battle that takes place in South Park Elementary, where humans, elves and goths are waging a grade school war. The player, in his role as the new kid in town — christened "Commander Douchebag" by Cartman, the Grand Wizard of the humans — adventures with South Park's Butters as they navigate through the school.

Douchebag and Butters have a deep library of spells at their disposal, both for avoiding confrontation and engaging in battle. Some are genuinely magical. The two can shrink to tiny size in order to climb up up a drain pipe, then sneak through a ventilation shaft to overcome a blockade set up by the elves, which Stan and Kyle pledge allegiance to.

Other spells available to the player are flamboyant names for mundane acts, like farting. Players can unleash vicious farts against their goth enemies, setting them alight or tossing them by passing gas into the hand, then throwing the offending odor. That's called the "Cup-A-Spell."

Magical abilities carry grand names and DIY executions. A Lightning Volt, for example, will see one of the South Park kids dump a bucket of water on a foe, then drop a car battery with exposed wiring into the resulting puddle. Healing Touch is simply a tap on the back and a reassuring "Yeah, that's it little buddy," from Cartman. A Funnel of Frost is a fire extinguisher and Hammer of Justice... a hammer.

Spellcasters in South Park can also unleash streams of fireworks, flaming flatulence and undead cats revived by the power of toxic waste at their foes.

Some of those spells play out more dramatically and more punishingly depending on the timing of a button press within a certain window. The action is reminiscent of the timing-based flourishes applied in games like Nintendo's Mario & Luigi RPG series or the active reload actions of Gears of War.

The New Kid, aka Douchebag, later becomes known as the Dragonborn at school, we're told, thanks to his shout abilities. His shouts will allow him to break down barriers and knock over trash cans, but it's his reputation as the Dragonborn that appears to be more important. He'll unite the various factions — girls, goths, elves, humans — of South Park Elementary. He'll do so through South Park: The Stick of Truth's version of Facebook, which is known in-game as, well, Facebook.

Facebook serves as the game's menu system, where players will manage relationships, track missions and upgrade weapons with "strap-ons."

The end of Obsidian's demo culminated in a battle between Douchebag and Cartman after the former is given a chance to change his allegiance from siding with the humans (Cartman's faction) or the elves (led by Stan). Cartman hurls vicious threats at Douchebag, calling him a "Fuckin' Judas!" and pleading to the new kid, "Don't let him Jew-wash your brain!" In this version of the demo, Douchebag switches sides, leading to a deadly fart-off between him and Cartman. 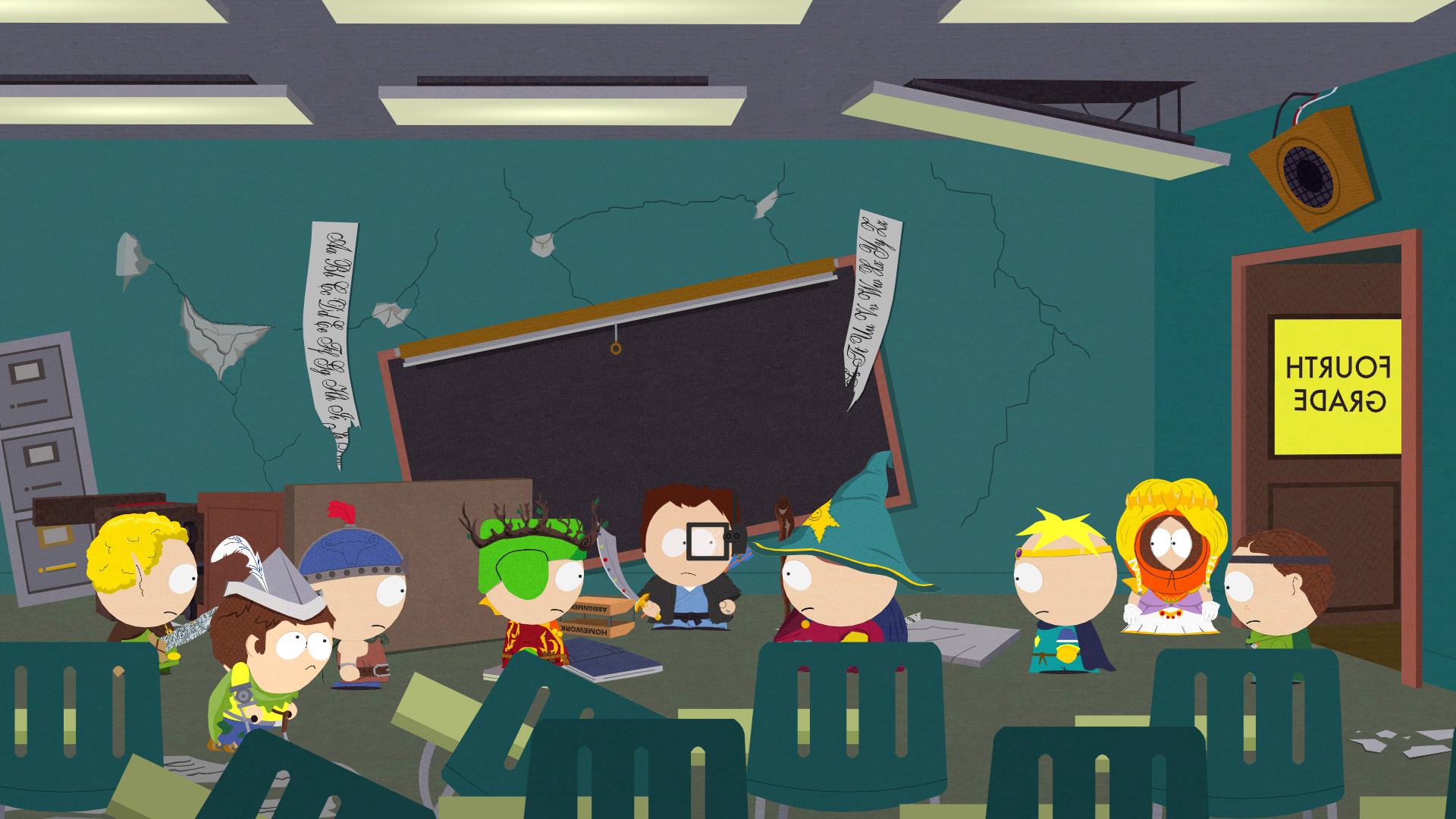 After that confrontation, we learn that Clyde Donovan is now in possession of The Stick of Truth and plans to wage a neo-Nazi war against the humans and elves using an army of reanimated dead cats.

Even for players who don't consider themselves fans of the television show, South Park: The Stick of Truth looks like it's shaping up to be a solid role-playing game with a biting, delightfully juvenile sense of humor. It's a testament to the game's writing that even the Obsidian developers playing the game — something they must have done dozens of times — still found themselves cracking up at the fart jokes, "shit nugget" references and other gross, over-the-top visual gags.

South Park: The Stick of Truth is slated to hit Xbox 360, PlayStation 3 and Windows PC later this year.

Update: Publisher Ubisoft requested the removal of the screenshot of Eric Cartman farting a column of flame from this preview, as the image "has not been approved by the ESRB."