State of Decay review: city on the hill

Share All sharing options for: State of Decay review: city on the hill

I'm about four hours into State of Decay, and I'm stuck on top of a water tower.

I have a rifle, three bullets and about 15 zombies 20 feet below me. And it's all because of a wristwatch. With goldfish on it.

Originally announced as Class 3, developer Undead Labs has finally brought its shambling, undead-driven open-world game State of Decay to life on Xbox Live Arcade. But there's more working under the hood of the developer's first release than just another Grand Theft Auto-inspired laundry list of busywork. By adding the player investment wrought by life and death decisions, State of Decay takes zombie fiction and open-world games to dark new places.

As State of Decay opens, the civilized world is crashing down around the feet of a slow moving-but-relentless zombie plague. After introducing several valley towns that can be freely explored almost right away, State of Decay shoves you headfirst into the city council of the apocalypse. You begin the game as the survivor Marcus, but the cast of playable characters quickly grows as you meet other remnants of small-town America who haven't been devoured or turned. State of Decay initially overwhelmed me with how much it had going on.

Your home base — which should eventually be relocated to larger, more opportune locations — can have additional structures built to accommodate more supplies, more survivors, more ammunition and even more advanced assets like a library or garden. But to build them, and to survive, you'll need to lead the charge to scout out the towns around you for supplies, all while avoiding the zombies roaming the streets. 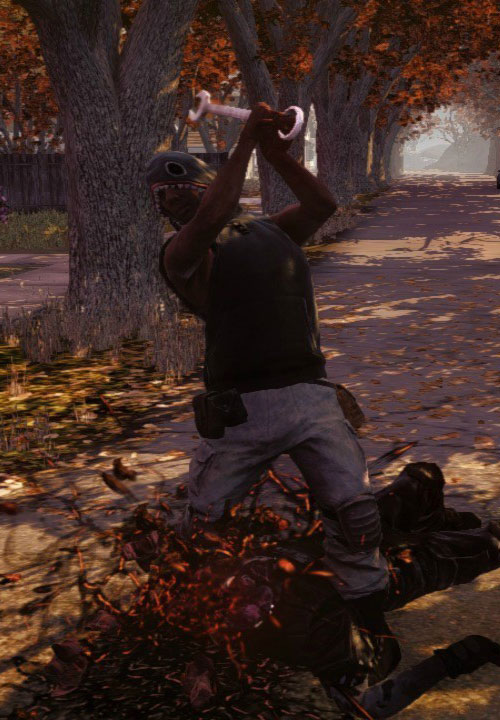 I quickly learned that State of Decay has a complicated ecosystem in place, one predicated on finding a balance between various factors. Some are practical — every home base can only have so many structures, which means that library may prevent you from building a garden or another bunk area, and building materials are often in short supply. But other concerns tested my moral compass. My impulse was to save every survivor I found, but each new resident is another mouth to feed, and possibly a new personality to conflict with other members of the group. And Undead Labs makes it clear early on that death is never far away.

At a basic level, every action you take carries the risk that you may not come back. Characters are only guaranteed to survive for as long as they're necessary to State of Decay's basic-but-functional plot — once they've served their purpose, all bets are off. The zombie plague raging through the game's world is more benign than most zombie fiction, as a simple bite won't kill, but if a character does go down — whether you're controlling them or not — they're dead for good. There are no extra lives and no second chances. Your characters will also tire and grow weaker, forcing you to switch to another healthy and available survivor, and if someone has taken a particularly brutal injury, there's a chance they won't make it at all.

All of this contributes to the most thoroughly realized zombie fiction I've experienced in a video game. Every decision has a wonderful sense of stress. Every journey away from home to secure materials, or to clear out an infected nest or whatever other task sits in front of you has the sort of tightly-drawn tension of permanent character death hanging over it. That threat ties systems into each other in such a way that even the most abstract game mechanics feel like a natural thing, though this is also in part because characters have so much mobility in State of Decay's world.

Action has to be balanced with stealth

There's a great sense of physicality in State of Decay, but more aggressive action has to be balanced with the need for stealth. If a door is locked, you can always try to shoulder your way in, but that makes more noise, which may draw more zombies. Same for crashing through windows. Characters can run, but that takes stamina that's also depleted by physical attacks. Gunshots make an ungodly amount of noise, which attracts the undead, but getting in close is even more dangerous. You can climb fences quickly, but so can the zombies chasing you. Again, Undead Labs has created a system that asks you to weigh the consequences of your chosen course of action on a constant basis, which makes tasks that would ordinarily feel tedious engaging and active instead.

Despite all the various options and possibilities in State of Decay, I was most surprised by the fairly well-developed sense of humanity and personality that underlies the game. Characters are developed enough to care, and there's a diverse cast of varying ethnicities and even sexual orientations. Characters reveal themselves via incidental dialogue in an organic way and several will eventually offer special bonuses during play. Earning their approval gains you more favor, which is traded like currency for items and assistance throughout the game, and which dictates your ability to lead in State of Decay's violent reality. 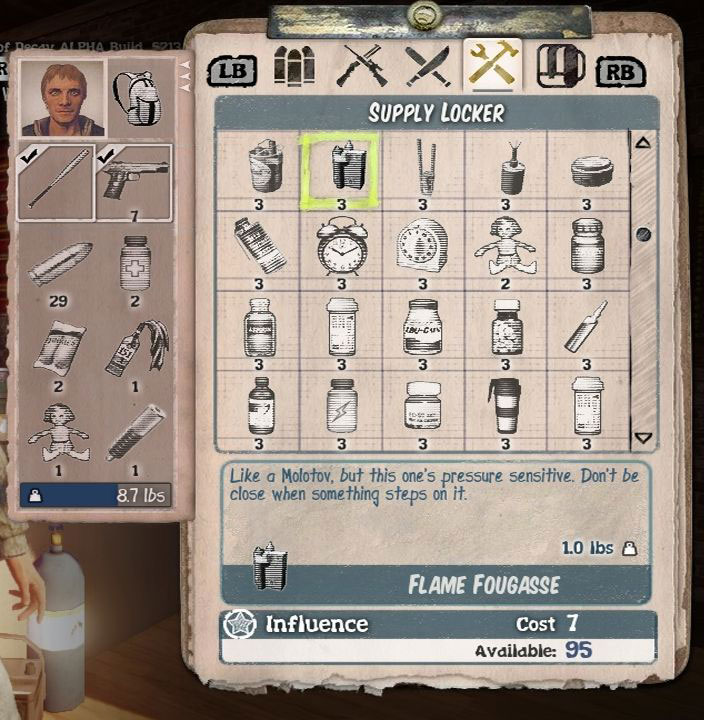 Those human personalities often lend a special poignancy to the emergent stories that materialize over the course of the game — like that water tower moment I mentioned before. I called in assistance from survivors I'd helped and eventually made it out of that situation alive, limping my way stealthily through a creekbed, terrified, scanning for the glowing eyes of nearby zombies as I searched for a car to make it back home.

State of Decay's ambition is so well executed that the small missteps it makes are easy to forgive, though they can be frustrating. While the technical issues that surfaced over the course of my 25 hours or so with the game — namely framerate issues, screen tearing, and excessive environmental pop-in — are a regular occurrence on current-gen consoles of late, I was much more put off by the game's failure to properly explain many of its systems.

Simple concepts like coffee are never really explained and can be vitally important later in the game, and moving the main narrative forward is dependent — unless you allow multiple real-world hours to pass — on completing tasks that I thought were optional. I didn't know that State of Decay's world continued when I exited the game until I came back the next day to find morale low and one of my survivors dead. But the camera is the worst offender. I never got killed by the recalcitrant third-person angle, but my view was often blocked before I frantically reoriented it.

My impulse is to excuse State of Decay's problems in light of everything it does well. By tying so many systems together with tough choices and the constant spectre of death hanging over it, Undead Labs has created something singular. Small complaints notwithstanding, State of Decay is one of the most cohesive, terrifying and engaging open-world games I've ever played.

Our review of State of Decay 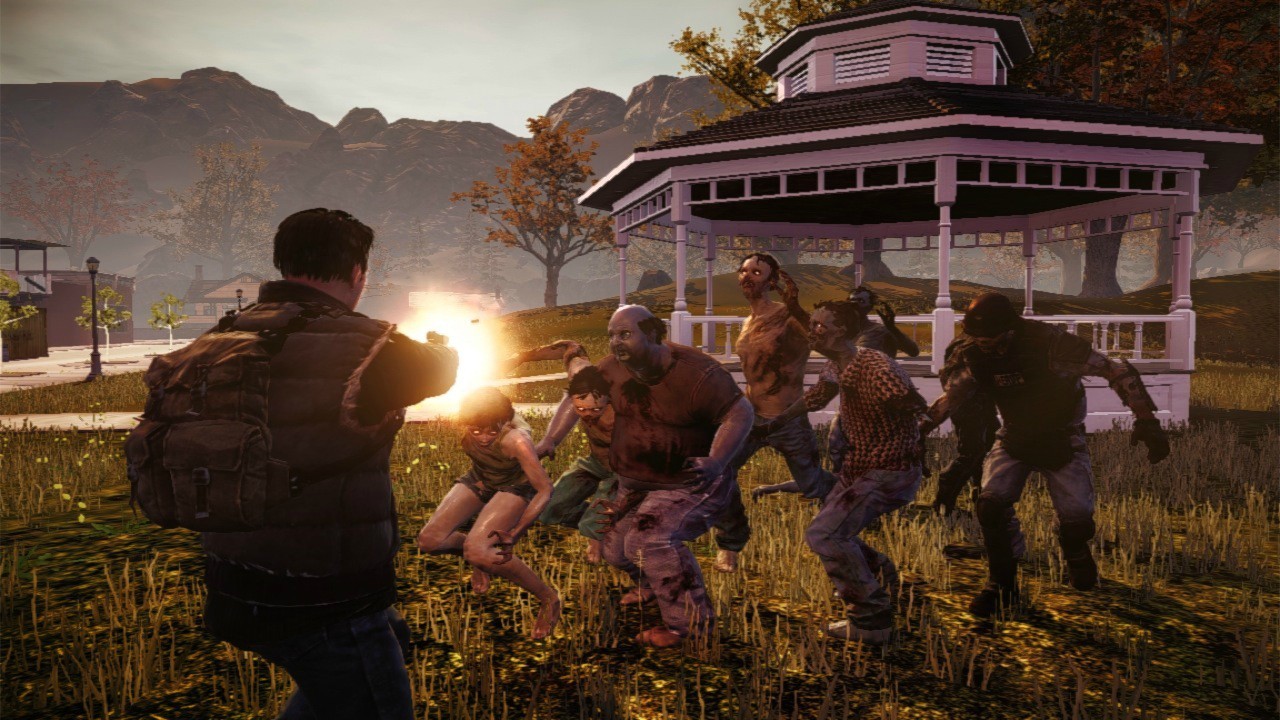 If you've been keeping up with State of Decay religiously in the two years since its launch, there's little in the new Year One Survival Edition that will come as a revelation. Content-wise, it packages the original game from 2013 along with Breakdown, the survival mode Undead Labs added after launch, and "Lifeline," the new story-driven campaign that came out last year, and pushes gameplay additions from those expansions to the original release.

For those who haven't been keeping up but enjoyed what State of Decay brought to the table, you're in for a lot more where that came from. Between the original, Breakdown and "Lifeline," there's at least 60 hours of game in YOSE, and even having played through the original release, there's lots of new things to see and do. Some seemingly simple changes greatly change the dynamics of the base game — for example, last year Undead Labs added storage spaces to the vehicles you find around the valley. All vehicles can now store items, including the rucksacks containing the vital materials your community needs to survive.

This makes a big difference in how often you can upgrade and grow your zombie survivor enclave. Carrying back materials is much more convenient and much faster than it used to be. It makes the upgrades you could build for your base easier to purchase, and in turn, the game is noticeably more forgiving in that respect than it was at launch. Granted, permanent death is still always around the corner, and losing a character, especially a favorite who you've leveled up, is agonizing. But I found myself more able to juggle my world responsibilities with my quest to build a little empire in the chaos. If this sounds too easy, Breakdown offers a much more pronounced challenge, with scarcer, non-replenishing resources and 10 levels of difficulty.

It's not all good news, though. While there have been some refinements to State of Decay's mechanics and design, the promised remastering of its visual presentation isn't as well-executed. The jagged, muddy image quality that marked the 360 release is gone thanks to a major resolution upgrade, and a new lighting system seems to be in place that cleans things up considerably. But there are still some significant framerate problems.

Year One Survival Edition isn't worse than the 360 version in this regard — it's improved, in fact. But driving through downtown areas or fighting off large hordes can still cause major drops in the framerate and even introduce some slight screen-tearing. I can live with the compromises on presentation, but the decreased controller response is frustrating in a game so willing to punish missteps with permanent consequences. It's also worth mentioning that load times for most of the game feel quicker, but the load time from the title screen to any of the three modes is incredibly long — as in, wander around your apartment long.

Still, even after two years, State of Decay remains a unique and singularly successful take on the zombie subgenre — and the new content and retooled systems made enough of a difference to pull me right back in.

Our review of State of Decay

State of Decay review: city on the hill