Xbox Live users will receive notifications when actions have been taken based on complaints they've registered, a Microsoft spokesman confirmed to Polygon.

Eric "e" Neustadter, who works on Xbox Live at Microsoft, tweeted about the feature earlier today, writing that "Xbox Live is now letting you know after we've taken action on a complaint of yours."

The "Complaint Feedback" procedure began rolling out earlier this year, we were told, and those who registered a complaint on which action has been taken will be notified with a message on their console. They can learn more information by visiting the official Xbox Complaint Feedback website.

The program keeps the complainer's information private, the spokesperson told Polygon, and the Complaint Feedback FAQ explains that this is in part because Microsoft has "concerns about retaliation between users." Further, any complaints rolled out before the program took effect will not receive notification that action was taken. 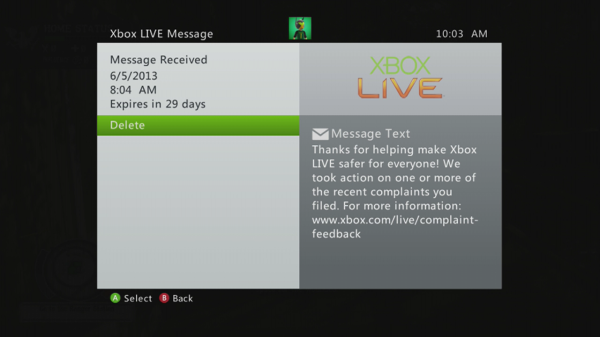 According to Microsoft's published policy on suspension and console bans, the company review complaints daily and makes decisions based on violations of the Terms of Use and Code of Conduct. Users may receive communication suspensions, which prohibit them from communicating on Xbox Live, service suspensions, which blocks Xbox Live sign in, console bans, which block consoles from the online service, and gamerscore resets, which reset players' accounts when they "gain achievements through avoiding gameplay and using external tools."

The full statement from Microsoft appears below:

The team here at Xbox actively listens to feedback from our Xbox Live members and as a result we have implemented a complaint feedback feature for Xbox Live. When a member files a complaint against another player, the complaint feedback feature will notify select complainants that one or more of their complaints have resulted in enforcement action. Members will be notified via in-dash messaging and may view additional information at Xbox.com/live/complaint-feedback.

Bullying and harassment of any kind are not welcome on Xbox Live and is taken very seriously. The Xbox Live community grows daily, and we continue to explore methods and levels of enforcement to enhance the ways our members connect and have fun. Addressing this issue is an ongoing effort for the gaming community, Microsoft and our partners, and complaint feedback is one feature in several near- and long-term product and service enhancements that we have in the works.