Aiden Pearce and the challenging art of Watch Dogs

Share All sharing options for: Aiden Pearce and the challenging art of Watch Dogs

Comic artist Alex Ross, designer of Watch Dogs box-art and promotional poster, says the Ubisoft game poses unique challenges, due to the central character's desire to blend in and operate secretly within a teeming city.

Ross has created work for Marvel and DC Comics, as well as designing superhero costumes for movies like Spider-man (2002). He recently worked with Watch Dogs publisher Ubisoft on concept art for Assassin's Creed III.

Speaking to Ubisoft's blog Ross said, "Aiden is about blending in. He's not trying to stand out. He's not looking to be spotted on the street. So in a way, his heroism has to be blended with the idea that he's skulking on the side, in the shadows. He's not meant to be in glorious color. That requires a certain amount of restraint in the posing, but it goes with the context of the character. He's not out front. He's slyly to the side, brandishing his firearm and his weapon, which is his phone." 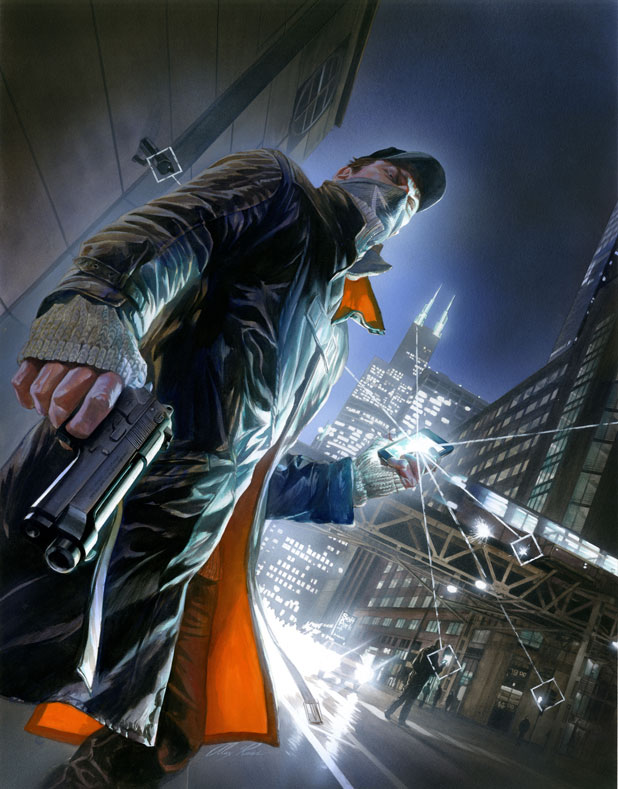 Aiden Pearce hacks into systems and accounts in order to secure valuable data, and to cause disturbances for his own ends, for example, disabling traffic lights to create a distraction.

Ross said he focused on the importance of the phone in his artwork. "The thing you want your eyes to go to is not necessarily the Chicago skyline behind him, but specifically the phone. That's the whole focus of the game. It's about how Aiden can manipulate his environment. The gun is only a small tool in his arsenal, so to speak. The focus of everything he does is about how he can manipulate other mechanical devices in the city through the interconnected network that he can hack into with his smart phone. That's why it's like the beacon of light in the painting I did."