The third entry in the Final Fantasy 13 saga is both perplexing and easy to slip into. Square Enix has fashioned a new, wardrobe-based battle system for players to explore, while giving players direct, real-time control of Lighting. The result is an action game built on a foundation of costume customization and more traditional role-playing game mechanics.

Rather than setting up the sprawling world of Nova Chrysialis and Lightning's place in it — as Square Enix did for us earlier this year — the developer simply let us play a small slice of Lightning Returns: Final Fantasy 13 at a recent event.

As Lightning is the only playable character in the third Final Fantasy 13 game, it's up to her diverse, flamboyant attire to fill out the roles of her allies in battle. In the playable, tutorial-heavy demo, Lightning had three "schema" — the clothing, armor and accessories that define her abilities — to choose from: Dark Muse, Sorceress and Divinity.

Each schema has its own attacks and spells. Sorceress, for example, packs in three recurring Final Fantasy abilities: the spells Firaga, Ruin and Blizzara. Dark Muse dedicates two buttons on the face of the game to slash attacks — one heavy, one light — and Electric Blitz. Divinity is a mix of melee (Galestrike) and ability (Thunder).

In the loadout available in the demo, Lightning also has a dedicate block button allotted to each schema. But since her schemata will ultimately be customizable, players could opt to forgo a defensive block, we're told, increasing her attack options. 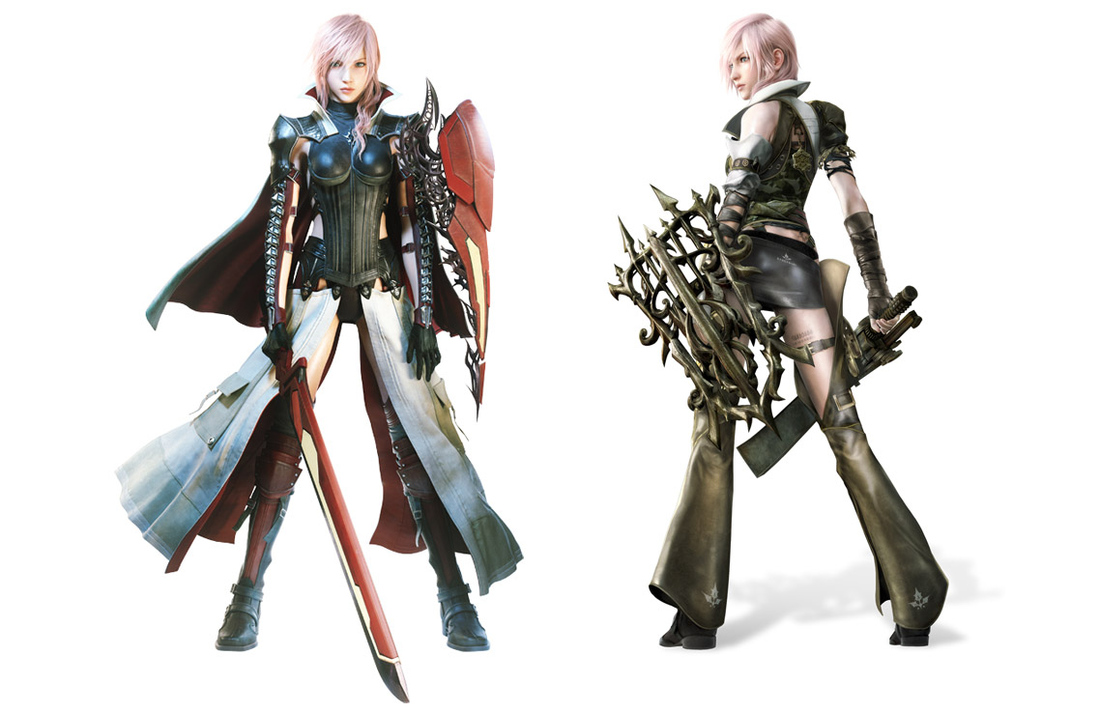 Precisely how and why Lightning's outfits define her abilities and attacks is something that remains to be explained, Square Enix reps said. There may be more to the schema system than appears on its surface — as a gimmick to grant her different skills and let players identify their loadouts more easily. But Lightning's sartorial choices may simply be a way for character designer Tetsuya Nomura to flex his fashion design chops (or for Square Enix to give Lightning cosplayers more fodder for homemade costumes).

Players cycle through Lightning's schemata with the L1 and R1 buttons on a PlayStation 3 controller. Each scheme has its own independent ATB bar. Use a spell or weapon-based attack and the bar will deplete as players issue attacks in real-time. Lightning's three ATB bars will refill over time, but slowly, forcing players to flip from schema to schema in order to stay on the offensive.

Lightning can move around during battles with enemies, allowing her to dodge certain attacks and attack safely with ranged spells.

She can also cause an enemy to "stagger" by repeatedly striking it, knocking it down and leaving it defenseless against a series of follow-up attacks. In the case of a Red Dragon we faced, Lightning's electricity-based attacks targeted its particular weakness. After a volley of Thunder spells, a "stagger wave" appeared over the enemy's hit points meter, indicating a stagger was imminent. Once knocked down, Lightning can unleash the full strength of her arsenal of attacks without fear of harm.

Adding to the real-time combat complexity of Lightning Returns is the Overclock system, which lets Lightning unleash a time distortion that slows the movement of her enemies. Using Overclock can help reduce the time it takes to cause an enemy to stagger, but it's also meter-dependent. The requirement to fill that meter was unclear, based on our hands-on time with the game.

Outside of battles with Red Dragons and Anubys, the Lightning Returns demo offers a brief glimpse into the game's story and Lightning's movement through the world of Nova Chrysalia. As she adventured through the game's doomed world, Lightning received guidance from Hope, who speaks to her while she pursues Snow, her ally from Final Fantasy 13. Lightning's movement through the hallways of an industrial facility are speedy and graceful. She glides effortlessly up and down ladders, and can weave through enemies as they appear in the game world, allowing players to pick their battles.

The demo offered a brief, but important look at Lightning's action-focused presence in Lightning Returns, which potentially makes this one of the more novice-friendly Final Fantasy titles in some time.