Share All sharing options for: Hands-on with PlayJam's GameStick, the handheld Android micro-console

GameStick is the second Kickstarted Android device looking to bring controller-based mobile gaming to televisions, the first being the cube-shaped mini-console Ouya. But the Ouya's soft launch at the end of March received a tepid response, and the company's CEO quickly admitted there was "still much to do" before the device's retail release, which was recently pushed back to late June.

GameStick has been hit with its own setbacks, including a delay from April to late June. PlayJam, the company behind GameStick, acknowledges that it and Ouya have much in common — beyond the fact that both devices were Kickstarter darlings for which demand greatly outpaced their small companies' production capabilities, they both face similar challenges in the marketplace.

We recently spent some hands-on time with a non-final version of the GameStick hardware. The prototype of the stick itself — which plugs into a display's HDMI port and also fits into the controller — was larger than the retail model will end up being, so we couldn't test the fit. In response to our concerns with the controller, which has a poor throw to its shoulder buttons and a low D-pad, PlayJam chief marketing officer Anthony Johnson told us the company is aware of those issues and is still tweaking the unit to address those problems.

The controller's weight, which we were told is close to the retail product's, felt good in our hands, and the convex analog sticks seemed to have an appropriate spring to them. But it's impossible to say at this juncture how the final retail GameStick controller will hold up.

Johnson first gave us a tour of the GameStick's spartan user interface, which he said is intentionally a no-frills setup.

"We've tried to keep it as simple as possible, as intuitive as possible," he said. "Really, what we want is [for] people to just plug [GameStick] in and get it straight away."

The main menu features sections for games and media. PlayJam has yet to announce any partnerships with streaming services, but Johnson said, "We're in the process of talking to a load of [video-on-demand] services," including Netflix and Hulu Plus. GameStick will offer its own XBMC app, the open-source media player that allows users to stream video from devices like tablets to a television. The XBMC implementation resulted from requests by backers of GameStick's Kickstarter campaign, which nearly 5,700 people backed to the tune of just under $650,000; the app is scheduled to be available at GameStick's launch.

"Whilst first and foremost the device is a games device, we recognize that people are going to want to use it for other things as well," said Johnson. GameStick offers 8 GB of on-board storage, as well as a slot that can hold up to a 32 GB microSD card. The add-on GameStick dock, which supports accessories like USB microphones, has a slot for a 64 GB full-size SD card.

"first and foremost the device is a games device"

On the software side, PlayJam will allow users to buy games in three ways: through the storefront in the device's menu; through the GameStick website, which will launch along with the device; and through upcoming iOS and Android apps.

We tried out Expendable Rearmed, Retrobomb's mobile reimagining of Rage Software's Windows PC, PlayStation and Dreamcast shooter Expendable. With its traditional twin-stick setup, the simple game is well-suited to the dual analog GameStick, and we had no issues with the controls. Although Expendable Rearmed doesn't feature stunning visuals, it looked fine on the large HDTV we were playing it on.

But flipping through the few titles listed on the GameStick menu — which, according to Johnson, is a small sample of the full library — gave us some doubts about the system's software lineup. If GameStick is supposed to be primarily about the games, we didn't see very many well-regarded smaller mobile titles, let alone popular ones from major publishers. Perhaps the most well-known game on the menu was Shadowgun, the 2011 third-person shooter from Madfinger Games.

Johnson pointed out that many of the most popular mobile games are best suited for touchscreen devices, not controllers, so GameStick versions of titles like Angry Birds or Fruit Ninja wouldn't work well. He also said PlayJam is very close to announcing a few notable games from major publishers that are on their way to GameStick. However, said Johnson, that's not necessarily a specific focus for PlayJam.

"This is less about putting syndicated games up," he explained, referring to ports of existing titles, "and really about offering developers a platform to get new and innovative content on the big screen." 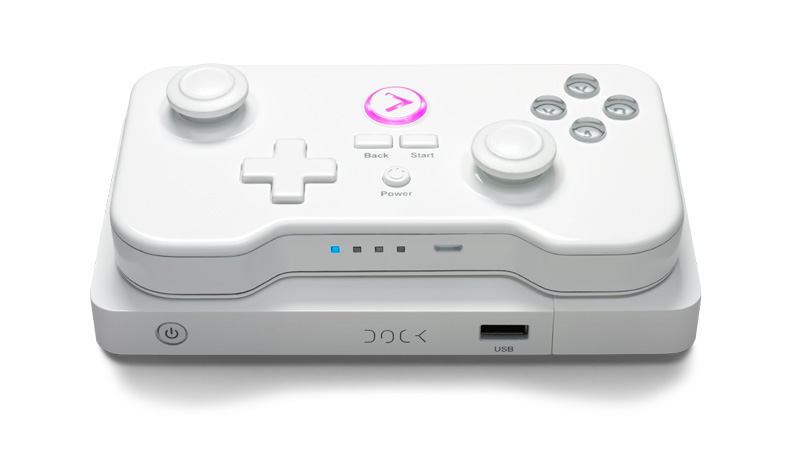 GameStick sitting atop its dock

That's not to say that PlayJam doesn't want big games on GameStick. According to Johnson, the company tried to use it to play the Android version of Grand Theft Auto 3, and it essentially runs natively on the device. But Johnson said GameStick is particularly exciting for indie developers, whose only access to the living room has been through console makers Microsoft, Sony and Nintendo — where the developers have to spend thousands of dollars on development kits.

GameStick, meanwhile, costs $79, and Johnson said it isn't too difficult to customize an existing mobile game for the console as long as it's already geared toward controller-based play. He added that PlayJam believes that once GameStick is sufficiently established, game makers will begin to develop specifically for the device.

"you've got to build a use case for this"

PlayJam is ramping up production for GameStick's retail launch, which will take place at three main partners: GameStop (which is an investor in the company) in the U.S., GAME in the U.K. and Amazon. Johnson showed us a video advertisement for GameStick geared toward the retail market, which PlayJam is hoping to attract — after all, he pointed out, the device's impressive Kickstarter campaign was just a push to get the company started; it won't lead to long-term success.

"It's really important to remember that there's a consumer side of all of this. Within the Kickstarter, early-adopter, geeky community, people get it. And it's really easy to feel comfortable within that," said Johnson. "But we're actually pushing a new category here, and those aren't the people that we need to convince."

He finished, "For the consumer-facing side, you've got to build a use case for this."