Share All sharing options for: Airtight Games devs explain why Soul Fjord is coming to Ouya

It only takes a few frames to spot the eccentricities of Soul Fjord, the upcoming project from Dark Void and Quantum Conundrum developer Airtight Games. It's a chimeric blend of genres — part rhythm game, part dungeon-diver — and artistic inspirations, drawing upon Norse mythology and 1970s funk music. Perhaps the strangest thing among its near-universal strangeness, however, is its exclusivity on Ouya, the crowdfunded Android console set to launch later this summer.

A single-platform release is an odd release strategy for any developer to undertake, especially when that single platform is as relatively untested as the Ouya. Airtight creative director Kim Swift, who joined the studio in 2009 after designing Portal and working on several other Valve titles, told Polygon that the game's limited release is part of a partnership with the Ouya development team — a partnership that also helped to support the developer's equally untested IP.

"We were in the process of finding funding and a good home for Soul Fjord when we started talking to Julie Uhrman from Ouya," Swift said. "We were looking to create a funky, unique new IP and they were looking for great games to coincide in their launch window. The timing worked out perfectly for both of us and we've been really happy working with the Ouya team thus far."

Ouya's investment in Airtight — the console creator is fully funding development on the title, Swift explained — isn't its first attempt to secure exclusive games on the platform. Last July, the company partnered with Robert Bowling's studio Robotoki to produce an Ouya-exclusive prequel to its upcoming zombie apocalypse title, Human Element.

Soul Fjord is inarguably the most bizarre of Airtight's recent repertoire, even out-stranging its dimension-swapping puzzle-platformer Quantum Conundrum and upcoming spectral detective story, Murdered: Soul Suspect. Swift admits that the hodgepodge of genres and styles incorporated in Soul Fjord made the studio "worried about how it might be perceived" on traditional platforms, making its release on Ouya a less risky maneuver in terms of reception.

But the studio wasn't willing to compromise on the game's originality, Swift explained. Airtight is a studio with a lot of ideas they'd like to develop, and partnering with the Ouya team was its best bet to manifest one of those ideas into a finished game.

"Actually, if you take a look at all of the games Airtight has put out in the last few years none of them are particularly alike," Swift said. "We all play and enjoy a lot of different kinds of games here and as an extension want to make games that are from a broad variety of genres. The concept of combining a rhythm game and a roguelike came out of a brainstorming meeting with the team on what sort of game we might want to tackle next. We had a ton of other ideas in addition to Soul Fjord, so hopefully you'll be seeing those in the coming years as well." 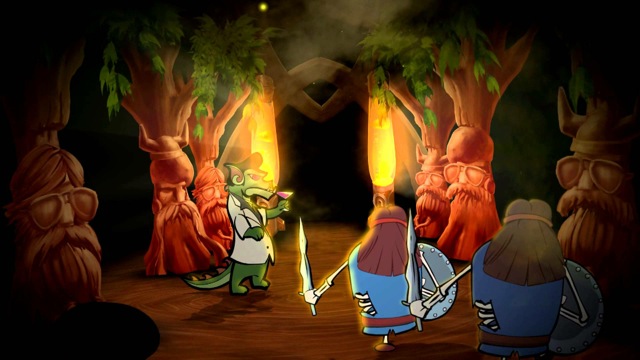 More importantly, Swift explained, the decision was influenced by the team's desire to play Soul Fjord with a controller, making a console release ideal.

"When we originally conceived of the idea, we really wanted to have the ability to use a controller," Swift said. "By partnering with Ouya, we know that we will get that controller, as well as a platform that is indie-friendly and supports innovative and unique ideas."

A physical controller isn't the only benefit that the Ouya afforded Airtight, Soul Fjord programmer Mark Mihelich told Polygon. The uniformity of the console's hardware made developing the game easier than it would be on a more variable system, like mobile devices. The NVIDIA Tegra 3 chipset is "in line" with what's on offer on other home consoles, and includes performance analysis programs and other helpful tools for Soul Fjord's dev team.

"Obviously being an Android device it is similar to developing a mobile Android title in terms of the OS, but with a fixed hardware platform we get some of the advantages of console development in that we can target specific hardware features and performance capabilities," Mihelich said.

"...first things first, we just have to get the game done"

The game's not quite finished yet, Swift said, and likely won't be until later this year, arriving after the Ouya's scheduled release date of June 25. Airtight plans to port it to other platforms following its release — Swift noted that "first things first, we just have to get the game done" — but, like many new intellectual properties, the future of Soul Fjord will depend largely on how it's first received.

"I'm not sure I have any particular expectations, however I do hope that the game will be well received and fun for folks to play-- I mean, what game developer doesn't want that," Swift said. "We plan to continue supporting the game past the initial launch and will definitely be paying attention to our player's feedback for what they'd like to see next.

"As for Ouya, I truly hope that their platform is successful as they've been really supportive and great to work with," Swift added.