Share All sharing options for: A Hat in Time hopes to atone for the platforming sins of Donkey Kong 64

The collect-a-thon platformer genre is dead, Danish indie developer Jonas Kaerlev explained. His studio, Gears for Breakfast, a global collective of volunteers living in Denmark, the U.K., Australia and the U.S., is trying to revive it with A Hat in Time, the team's first project which has skyrocketed past its modest $30,000 Kickstarter goal.

He's not wrong about the genre's flatlining in the current console generation. There's a general shortage of platformers on consoles not produced by Nintendo, and even the ones we get lack the thoroughness of a Banjo-Kazooie or a Mario 64. Modern platforms are too linear, Kaerlev argues, giving you little reason to stop and smell the roses.

There is a culprit in the killing of this genre, and Kaerlev is quick to identify it.

"I don't want to blame it all on Donkey Kong 64, but it's partially at fault," Kaerlev told Polygon in a recent interview. "Donkey Kong 64 did a lot of things wrong, in that it was very tedious to collect everything in order to move on. A lot of people don't want that. They want to be able to breeze through the game if they so desire, but there are also people who want to collect everything, and get stronger and better.

"I don't want to blame it all on Donkey Kong 64, but it's partially at fault."

"I think that modern games are sort of like a roller coaster," Kaerlev added. "You start at A, and get to B. They've streamlined the experience as much as possible, and I just think studios don't consider that some people want to stick around and try everything."

A Hat in Time is a striking game thanks to its gorgeous, cel-shaded visuals inspired by Wind Waker. But its design is equally surprising; levels are vast, open worlds that the player can explore, collecting objects and finding new upgrades for traversal and combat abilities. It hearkens back to the golden age of Rare, or, more recently, Double Fine's Psychonauts; a game Kaerlev notes as being one of the last great collect-a-thons. 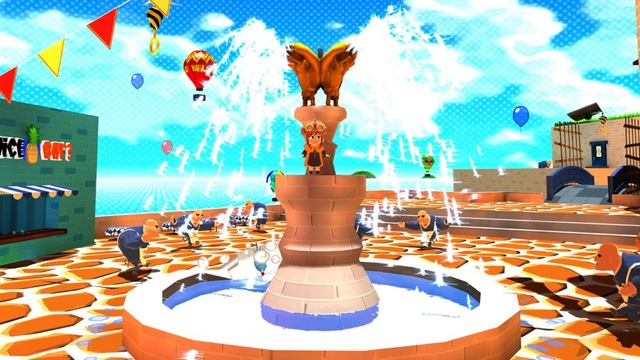 Gears for Breakfast's team of eight adores this genre, but Kaerlev admitted that he wasn't sure if the rest of the world still harbored any nostalgia for it. That's one of the reasons the team's goal was so low; he even considered dropping it to $20,000 before launching. That's not nearly enough to make a game, he said, but he wasn't sure how successful the campaign would be, and the team needed a budget, any budget, to work on.

"It did worry us before we launched the Kickstarter," Kaerlev said. "But we thought if we emphasized enough that we were trying to make something less like Donkey Kong 64 and more like Banjo-Kazooie or Mario 64, we thought it would be much more well-received."

It was. At the time of this writing, the game is sitting at a little over $108,000, well over triple what the studio was asking for.

What's more exciting than seeing A Hat in Time get finished — it already has a lot of content, Kaerlev explained, but "lacks variety" — is seeing what Gears for Breakfast can do with any budget at all. Everything that showed up in the Kickstarter demo reel was made without spending a dime. Even the stellar cel-shaded visuals, which Kaerlev explained was a direct result of the limited resources the scattered dev team had at its disposal.

"The cel-shaded style is kind of easy to make something pretty without having to put a lot of effort into it," Kaerlev said. "That sounds cheap, but it's kind of the truth. We're a small team, we don't want to spend hours making Hat Kid's hair be all natural and realistic, like in Tomb Raider. We want to make something that looks good, but allows us, as a small team, to make it fast, without wasting millions of dollars into just a single strand of hair."

"Now A Hat in Time isn't just a mark on my resume to get hired somewhere...:

The campaign's success won't change the team's practicality, either — even if it surpasses its funding goal by over 1000 percent, as Kickstarter-measuring site Kicktraq has predicted. If the donations keep rolling in, Kaerlev said he'd like to start paying his fellow developers who, at this point, have worked tirelessly as volunteers. He'd also like to have them working under the same roof, as having his team spread across four countries on three continents has placed a considerable burden on Gears for Breakfast.

"Nobody's working full time on the game at the moment," Kaerlev added. "We're hoping that once we get the Kickstarter funds we'll be able to. I know I will be sacrificing some days just to the game, and a few other people will as well. But it's not quite enough money for a full time job yet." 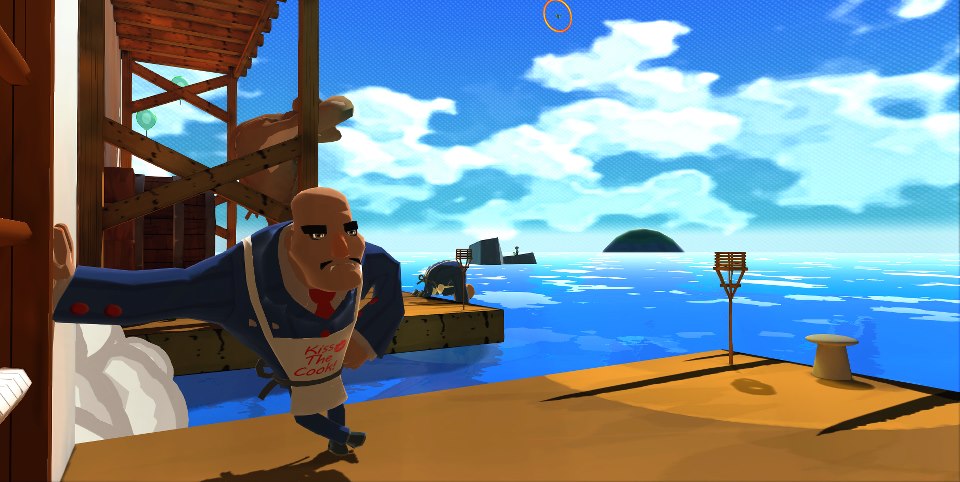 The ambition to put Gears for Breakfast on the map — quite literally — was not Kaerlev's original goal when he started developing A Hat in Time. Quite the contrary: He was just looking for a bulletpoint to put on his resume.

"That's kind of changed," Kaerlev said. "Now A Hat in Time isn't just a mark on my resume to get hired somewhere, now it might actually be a kickstart to form our own studio and be entirely independent, sort of like Double Fine-style. That's what we really want. We want to create our own content, and just be able to put our own mark on the current gaming market. To have an influence on how games should look, and how games should play."

A Hat in Time is scheduled to launch for Windows PCs and Mac, possibly on Steam pending the success of its Greenlight campaign. Gears for Breakfast hopes to launch the game on Wii U as well, though that's proven a somewhat tricky process, as the game's being developed in Unreal, meaning the dev team would need to acquire a license to port the game to Nintendo's platform. The studio is talking to Epic Games to work out a deal, Kaerlev said, and is talking to another publisher about using their license in exchange for a "cut of the cake." They're also in talks with Nintendo of America for advice on how to become a licensed publisher on the platform.

If the game can secure a publisher, it might end up being a much, much bigger deal than the bulletpoint Kaerlev first expected. It arguably already is; the campaign is around $40,000 away from its highest stretch goal with 19 days of fundraising to go. As support for the title mounts, so does expectation; a result Kaerlev didn't (and perhaps couldn't) anticipate.

"It's kind of frightening, I have to be honest," Kaerlev said. "We never expected we'd get this kind of attention. So we're not really used to it. It's a kind of unfamiliar zone. We think at the end of the day, it can only lead us somewhere good. It can only lead us where we have more control over what we want to make, and we think that's a step in the right direction."