Opinion: The cursed legacy of the Rogue family

Share All sharing options for: Opinion: The cursed legacy of the Rogue family

"My dear children, I'm sure you're wondering why I've called you to the homestead," Angela drops her knitting, her eyes are rimmed in red. "I'm so sorry to say — and I worry the shock may be too much for you to bear — but your father ... has been slain."

Silence. The teens look at each other as if their mother had just solemnly informed them of a decent sale on mutton at Yon Kroger. Finally, the eldest, McGladdery the Fifth, speaks for his siblings. "Oh? Oh, oh man, that's just ... wow. Dad. Man, death, huh? You just never know, right? It's like this Jim Croce song —"

"McGladdery the Fifth? Culp the Third? Teresa the Fifth? Are you cast from iron? Do you feel nothing at the passing of your own father? Culp, you literally have begun doing a sudoku as I herald this grim news!"

"Mom," Teresa squats before her mother's rocker, taking one trembling hand in her own. "We know you don't do so well with grief, and maybe this is just ... what do you call it?"

"Hallucinatory denial," Culp offers helpfully as he finds a spot in his puzzle for an errant 7.

You literally have begun doing a sudoku as I herald this grim news!

"Sure, thank you Culp." Teresa's eyes return to her mother. "It's just that, in a sense, and maybe it was just a feeling or even a premonition, but I think in a way we almost expected father not to return."

McGladdery joins his sisters side and adds tenderly, "You know, Mom, in a way, I think Dad might have known, too."

With a thwack, Culp throws his sudoku to the cobblestone and huffs to his siblings' side. "Yeah, I think he might have suspected. I believe my first hint was when father said 'Well, I'm going off to die in the castle, hopefully it'll be quick, maybe a spike pit or something. I'll try to send you kids back some gold. Maybe if I'm really lucky I'll get a rune or something I can pass on! Oh, who am I kidding, I'm nearsighted. Well, off to die!'"

"Culp!" McGladdery discretely kicks the heel of his brother's boot. 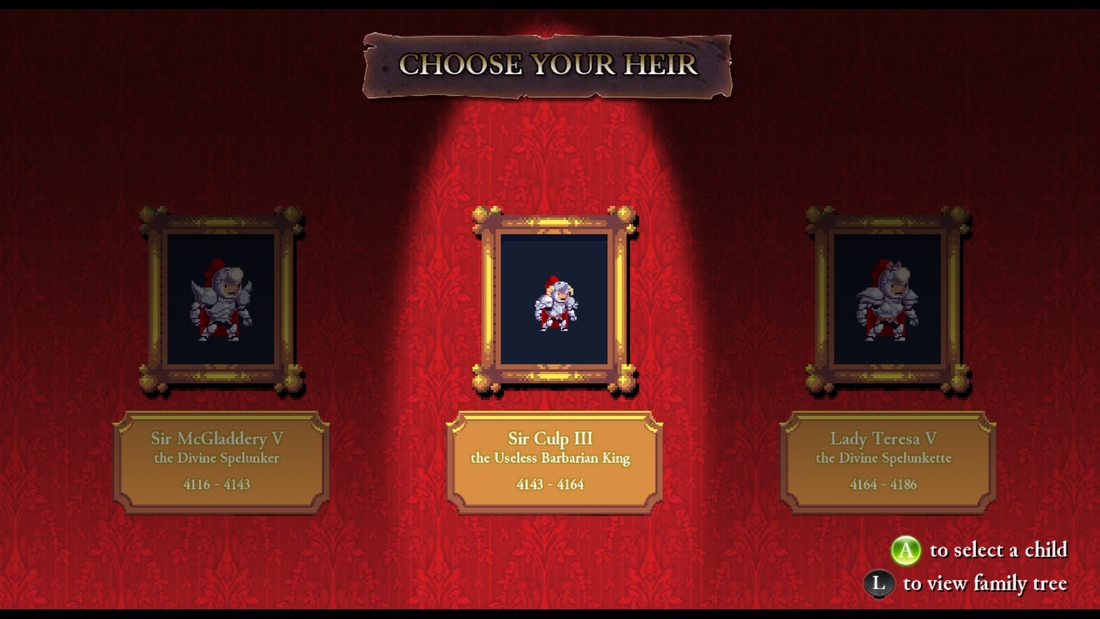 "But that's not true!" Angela insists, a bit of the color returning to her face. "His father was immolated and Grandpap was eaten by a wolf and Greatgrandpap was cleft in twain by a giant knight and ... OK, yes, I'm just now realizing they were all in the castle."

OK, yes, I'm just now realizing they were all in the castle

"Mom, haven't you ever wondered why Dad named all of us by spinning a giant wheel?" McGladdery has been swayed to his sibling's cause. "Did you catch when I told Dad I was dyslexic and he said 'Oh, lucky you!'"

"Hate to pile on here," Culp softens a bit as he attempts to steer his mother towards the truth. "But did you honestly never notice when you tell us we could achieve any goal we had for our life, Dad would always add 'There's a 2/3rds chance your mother is exactly right.'?"

Angela is stilled by this last observation, her tears finally halt. "Now that you mention it, I thought it was was a little odd that your father insisted on showing McGladdery where he kept his dirty scrolls and key to the grog cabinet last night. 'Twas also a bit strange when I tried to wash his shirts last Sunday and he told me to save myself the trouble because he was planning on dying at the castle pretty soon."

McGladdery stifles a chuckle as his mother's last revelation hangs in the air.

"I — I thought it was a metaphor!" she protests. She allows herself a few moments of silence and stands from her rocker, resolute. "Children, we must move on. We shall never forget your father. When his body is retrieved, we'll escort him to his final resting place on the highest mountain top we can —"

Now that you mention it ...

"Ahh, my poor dear, of course," Angela says. "Your terrible, debilitating vertigo that you mention at nearly every opportunity, no matter how germane to the topic at hand. How could I have forgotten?"

"'Tis nothing, Mother. Let's leave McGladdery and Teresa to their training, I'm sure they want all the practice they can get. Besides, your poor color blind son needs you to help him pick his tunics for the week."

Culp smiles warmly at his mother as he takes her hand and makes a mental note to keep tabs on his brother's grog key.