Share All sharing options for: How a bit of Warhammer 40K fan-fiction hopes to become a feature film

When Crytek artist Erasmus Brosdau decided to work on a side-project in his spare time, he opted to make a very short CGI piece about his favorite science fiction world, Warhammer 40K.

In the three years since, his little project has become one of the most notable pieces of fan-fiction in the world, with 30,000 Facebook likes and keen interest from a hardcore section of gaming fandom. It is a symbol for what is possible when people who care about fictional franchises create their own stories.

It represents a reaction, of sorts, to an official 2010 film called Warhammer Ultramarines, which failed to meet the hopes of many in the 40K community, including Brosdau.

Although the 40-minute film is the main plan, he hopes that the short film will persuade Warhammer's owners Games Workshop to team up with a producer and collaborate to bring a full CGI film, commercially backed, to the public.

"When I first started I just wanted to make something," he told Polygon. "Now I see that this movie can have a huge impact on the whole Warhammer 40K franchise. There is no other project like this."

Games Workshop has contacted Brosdau to give its blessing to his fan project, just so long as he doesn't seek to profit from the venture. But as the popularity of the project grows, so does his own sense that it could be something bigger.

"There is the official movie Ultramarines but fans hate it because the graphics and the story are so bad. I know the guys who made that film, and you can't blame anyone. It's just a mix of wrong decisions and a lack of resources from the beginning."

Brosdau has amassed a team of 30 volunteers to help make his film, including Aaron Dembski-Bowden, who has written some official Warhammer fiction and is working on the script, and Adam Harvey, who scored the Ultramarines soundtrack, and is donating his skills.

Animation is being headed up by Soheyl Mohammad, a former Crytek colleague of Brosdau's, who now spends his days working for Imagination Studios in Sweden, creating animation for AAA games, before returning home at night to help out on Lord Inquisitor.

"The way Erasmus approached me on this and has motivated me throughout the entire project is the mere fact that people that have these IPs on their hands and have basically botched them," said Mohammad. "They take your favorite thing and they make it crappy. You get disappointed. You want something better, You realize that in order to do that you need to engage and spend your own time to make that happen.

"That is the fundamental thing our group is trying to prove," he added. "Hollywood has this money-driven agenda to produce things that sell. But fans can create things that are more in-depth, more challenging, more fun. It can happen but people have never really given it a shot."

In essence, the team are not merely motivated to create a story, they want to create a "proof-of-concept," which, according to Brosdau, will persuade those in power to create a full feature-length CGI film based on Warhammer 40K.

"We are looking for a producer who would be interested in making this a full feature movie," he said. "It can be a direct-to-DVD or whatever. Everything is possible. So many fans still see this open gap that there is no real movie for Warhammer 40K."

Brosdau is certain that a movie like this could raise massive funding on Kickstarter, but without Games Workshop's participation, that can't happen. "I follow the rules," he said, adding that Games Workshop's primary business is selling tabletop games, not making movies.

He has been a fan of Warhammer 40K since he was a boy, collecting the miniature figures for the sci-fi space action game-world. As an adult and as an artist, he is attracted to the world's "gothic sci-fi" look, which he says is unique. 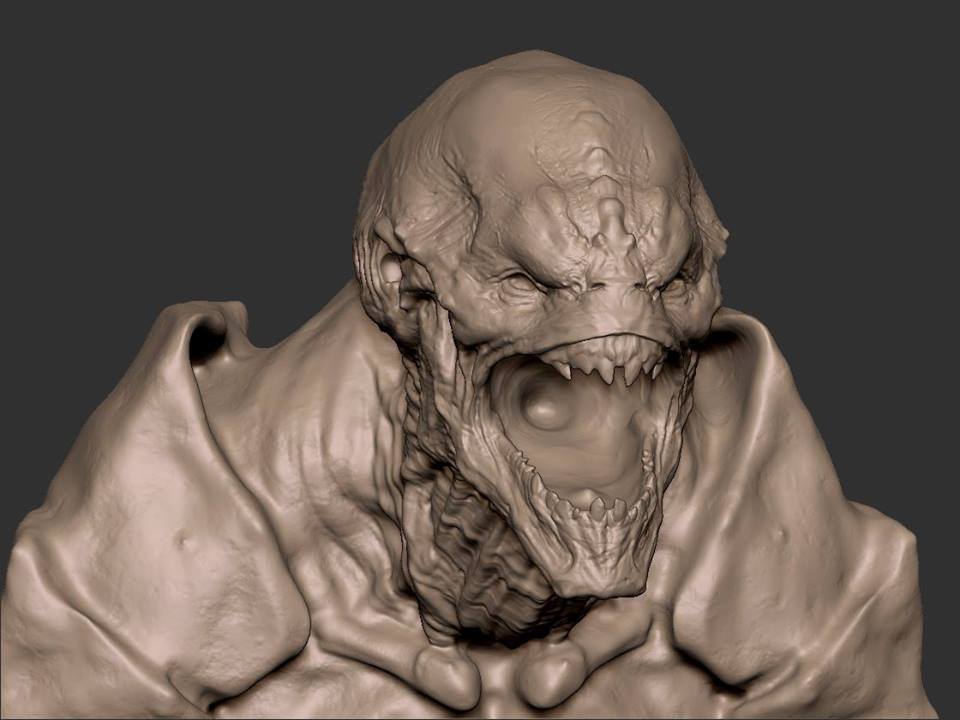 By day, he works at Crytek on cinematics, and many of the scenes in Crysis 3 were his work, such as glowing worm-holes and explosions.

But isn't it difficult to work all day on sci-fi visuals, only to come home at night to do the same? He says that, as much as he enjoys his job, making a film can be liberating, compared to making a game.

"In a game the player moves around and the whole composition of a scene can be broken. Even in cinematics, where you have a fixed camera, you are limited by the game engine. Working on a movie is fun because I only have to worry about making my one shot look perfect and then move onto the next one. I don't have to worry about the player walking around."

Polygon has reached out to Games Workshop for comment. For Brosdau, the big test will come when his eight-minute film is released. Based on the response from his two trailers and a YouTube video seeking artists to help on the project, he anticipates a lot of interest. And if no-one comes forward with a plan to fund a full-feature, there's always the 40-minute version to look forward to, although he won't put a delivery date on that.

"It's taken us three years to get this far and create eight minutes," he said. "With the environments and assets created and the team we have we can work faster but as for a launch date, well, that's a good question."

Despite his hopes for the project, and the inevitable comparisons with the official movie, he wants The Lord Inquisitor to stand up in its own right. "I want people to feel the atmosphere, to let them dive into another world for a short amount of time," he said. "So my motivation is never to create something just in order to show I can do better than others, but just to create cool stuff on its own.

"I see that the fans seem to really like the work I do and that's also a great motivation to me. Warhammer 40K is obviously not my idea, but the way I will show it is my interpretation of the universe and that has never been done before."